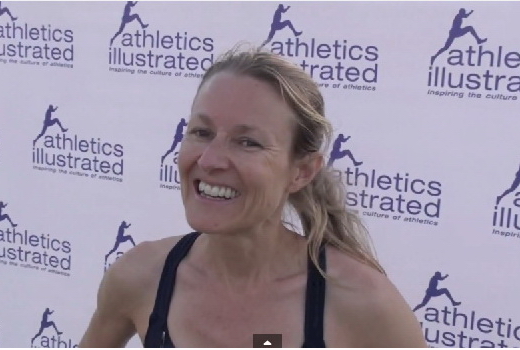 If things go according to plan, Catherine Watkins will be a new Canadian Masters’ record holder in the marathon come October 22nd.

“That’s the goal,” she acknowledges with a smile. “I do think everything will have to fall into place for that to happen. It will have to be one of those days where everything goes well. I know I am physically capable of it but, if it’s windy or it’s hot, obviously that will alter that.

“I would be disappointed if the day was the right day and I felt like I should have run the time that I think I can run. I would definitely be disappointed. I know enough about the marathon and a lot of it is getting to the start line healthy. But anything can happen on the day. I have had mixed experiences in the marathon, ‘GI’ or weather-related issues.”

Two years ago Watkins won the Eugene Marathon in a personal best time of 2:42:35. She was also the Masters’ winner at the Houston Marathon earlier that same year. And, when a place on Canada’s Pan Am Games team opened up, she answered the call, finishing 8th in her first international Games. But like all Masters competitors, she faces the constant aging process which makes training more difficult and recovery even more of a challenge.

“Eventually there is going to be slowing down,” she concedes. “But for the longer events the half marathon and marathon, that kind of training has a little more longevity for me. I find where I am slowing is definitely in the shorter distances. It has been harder to get the intensity, like in the 5k and 10k, I have noticed it a bit.”

Nevertheless, her Scotiabank Toronto Waterfront Marathon buildup has been encouraging. Healthy, and training consistently at 130 kilometres a week, she ran superbly at the recent Under Armour Eastside 10k in Vancouver, finishing in a time of 35:43 on a challenging course.

“I was actually really, really happy with that because it was in the middle of marathon training,” she adds. “So it’s hard to know how a 10k will go when you are in the middle of marathon training. I just felt really strong and consistent. I ‘even split’ the course and it was kind of a tough course to do that on. I ran 17:50 and 17:50 for my 5ks and it’s not really a fast course it was probably closer to a low 35 effort overall. So, I feel I am really in a good spot.”

With her two daughters in middle school she is able to do the necessary ‘pre-hab’ stretching and warm-ups prior to getting out for her training runs.

“I end up doing 45 minutes to an hour of rolling and physio before I head out the door and then in the evening more rolling and stretching,” she says of the technique which incorporates the use of massage balls.  “I am getting massages weekly and physio treatments every couple of weeks to keep everything on track. Gone are the days when I can just lace up the shoes and go for a run.”

Watkins laughs at her last statement. Clearly, she is relishing her career in Masters’ running. A sponsorship from Oiselle was one of her rewards and just last weekend she spent time with other elite athletes and staff at a retreat in Sonoma, California. The break was a little relief from the constant training she has been doing with coach Richard Lee of the BC Endurance Project and fellow marathoner Kevin Coffey.

“It’s actually been going really well,” she says of her buildup. “When we first started out I thought ‘oh my gosh how am I going to do a marathon?’ as you always do when you start. The last few weeks everything has started to click at the perfect time. It has been good. I have got my last huge workout coming up this weekend, 37km I think, on Saturday.

“Richard comes on his bike and carries my bottles so I can practice feeding. This is great. That’s one of the hardest things to practice on your own, being able to drink at that pace and get the fueling. I am still practicing. I think I wear as much as I drink!”

An avid reader of books, Watkins is a member of a book club which meets every four to six weeks. The rest of her time is taken up with parenting two active girls. When possible, she admits with a laugh, she enjoys nap time.

It will be all business though when she arrives in Toronto for the Waterfront Marathon. There are records to be broken and should ideal conditions prevail the name Catherine Watkins could be in the record book.