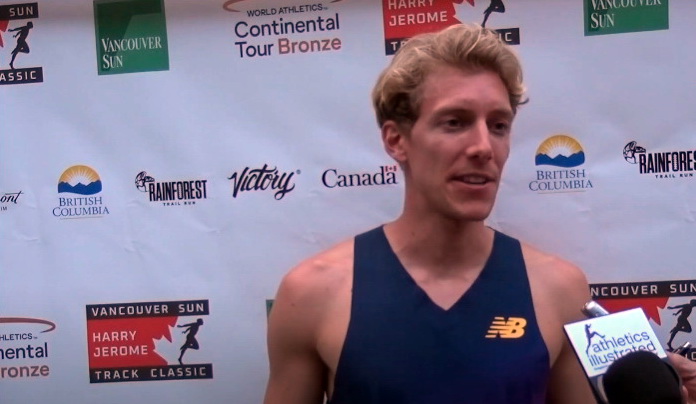 On the night of the Nativity of St. John the Baptiste day (a provincial holiday in Quebec), a pair of runners from La Belle Province closed out Day 3 by taking the top spots in the men’s 5,000m. Charles Philibert-Thiboutot, the 2016 Olympian in the 1,500m, dropped the entire field with two laps to go to take the win in 13:31.98. Thomas Fafard, meanwhile, the 23-year-old also from le Club d’Athlétisme Université Laval, out-kicked Mitchell Ubene of Royal City Athletics for second in 13:36.38.

Lucas Bruchet of Vancouver finished fourth in 13:37.32. The 31-year-old is Canada’s third-fastest 5000m runner behind North American record holder Mo Ahmed (12:47.20) of St. Catharines, Ontario, and Toronto’s Justyn Knight, who is the second-fastest all-time in North America at 12:51.93. Bruchet typically wins the Vancouver-area meets and owns a best of 13:12.56. He is a two-time Olympian. The newly married high school teacher may be looking toward retirement from the sport. He has been coached for several years by Richard Lee with the BC Endurance Project, a BC Athletics-funded operation.

The west coast is finally getting hit with summer-like weather. For Greater Vancouver, fall, winter, and a long spring has blended into an unusually extensive temperate and rainy stretch. It is likely that some of the athletes who narrowly miss the World Championships standards may have done better in cooler temperatures — especially those who reside on the coast. However, global championship meets are often hot, for example, the cities of Tokyo and Sapporo during the 2020 Olympic Games (mid-30s) and the 2019 World Athletics Championships in Doha, Qatar (30s and 40s).

Minutes after running alongside a cheering and celebrating crowd post-race, Philibert-Thiboutot addressed the live stream camera with a smile, saying: “The first thing I have to tell you is: ‘Bonne St. Jean!'”

Philibert-Thiboutot is one of the nice guys in track. Affectionately known as “CPT,” he has relocated to Vancouver and the benefits have been obvious. In April, at the B.A.A. Boston Marathon weekend, he broke the Canadian 5K road record with a 13:35 performance and the win. Three weeks later, he improved upon his 5000m best on the track with a 13:12.76 run in Los Angeles. One week later, he clocked a 28:11.81 10,000m result for yet another new personal best.

The 1500m phenom wants to be fast at a range of distances. He told Athletics Illustrated at the Harry Jerome Track Classic that the world-class 1500m runners are also now strong over 5000m and 10,000 — “they are strength-based athletes.”

Find information on tickets, scheduling and more on our event page here!