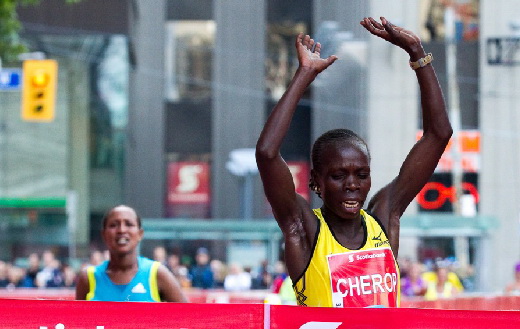 Sharon Cherop has incredible affection for the city of Toronto and the Scotiabank Toronto Waterfront Marathon.

Her superb victory in 2010 was a turning point in her career. Now the 31 year old Kenyan has confirmed she will return to where it all began and contest this IAAF Gold Label race on October 18th.

“It changed my life completely because it was a very big victory in terms of money for me and helped my family a lot,” she says of her stunning course record of 2:22:43. “Moreover, it was my first big victory in an international marathon.

“After that I also joined (Italian agent) Gianni Demadonna’s training group in Iten. Also it took many years to run my PB and then I was able to get a bronze medal (at the 2011 IAAF World Championships) in Daegu and to win the 2012 Boston Marathon.”

Until that day in Toronto she had dabbled with the marathon. Indeed, her personal best prior to 2010 was the 2:33:53 she ran in the high altitude of Nairobi. But persistence paid off.

Following her Toronto breakthrough invitations came in from all over the world. In 2011 she placed 3rd in Boston then, wearing the Kenyan national uniform, she earned the bronze medal at the world championships in Daegu, Korea.

Cherop’s husband, Matthew Bowen, is also a marathoner of note and sometimes trains with her. He ran a personal best of 2:10:57 at the 2013 Rennes Marathon. Both were born in Marakwet but after joining up with the Demadonna training camp they have moved to Eldoret about 80 kilometres away.

“I train with the group of Gianni Demadonna under the coach Gabriele Nicola,” she explains. “Among the group are Mary Keitany (former London and New York Marathon winner), Flomena Daniel (2014 Commonwealth Games Champion), Agnes Kiprop (2:23:54 marathoner) and Helen Kirop (2014 Seoul Marathon champion). We run two times a day for 5 days a week. Normally I run 180km a week. Sometimes also 210 km a week.

Marakwet is hilly terrain and when she is preparing for hilly races, like Boston, she will return to this familiar area to train alone.

“I live in Eldoret where I have built my house but spend some time also in Marakwet my native place,” she explains.

“Of course the house was built with the money I have earned in my career. It’s a very big house with three floors. It’s on the top of a hill outside Eldoret on the way to Iten.

It’s big because I have some relatives living with me and my mother as well.”

Cherop and Bowen have a six year old daughter named Natalia. Two of her younger relatives look after her when her parents are training or traveling. Spare time that she used to have when Natalia was younger has been taken up by her daughter’s natural inquisitiveness.

“Yes I like to read novels but more and more in the last times I’m so busy with training and family issues that I don’t have much time,” she says.

“Sometimes if I’m alone traveling I read. But if Natalia is with me I should stay more with her. I like to play with her and to explain whatever she is asking. Sometimes she asks so many questions.”

While Cherop’s preparations for Toronto are so far going very well she cautions that the course record is not the primary purpose of returning to Toronto even when the bonus for setting a record is $35,000 Cdn.

“I know that I have to prepare well and to be able to win,” she declares. Time is important but to win a race is more important. I prefer to win in Toronto in 2 hours 24 minutes than to run 2:22 in Dubai and be number five.”

At present she is affiliated with the Kenyan Armed Forces Club and though she once harboured thoughts of working for the Armed Forces after she retires from running she now has started a thriving business with her husband.

“I built many small houses in Iten near the University and we are renting to the students,” she explains. “Mathew is the one who follows the construction and all the plans and now is following the rent of the houses.”

Race Director Alan Brookes is busy assembling a field worthy of the race’s IAAF Gold Label status and Cherop can expect a challenge when she lines up on October 18th. But, there is no doubt that she returns to Toronto a far more experienced and talented marathoner than five years ago. If conditions are right and the field reacts positively there’s no reason not to expect something special from her.