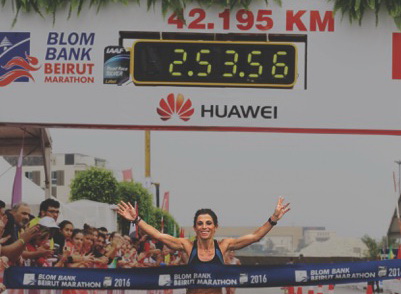 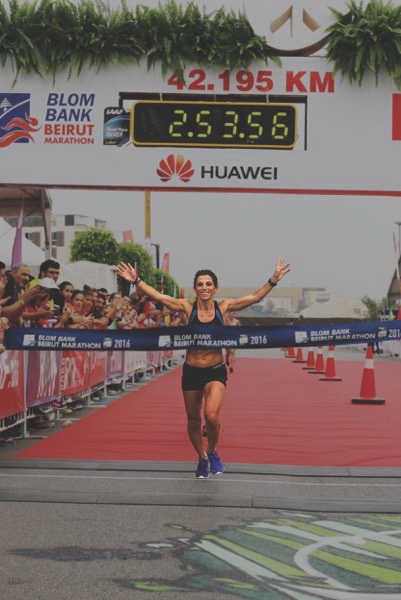 Lucrative prize money might be the attraction for most elite athletes at the Blom Bank Beirut Marathon but for Lebanese marathon record holder Chirine Njeim the event is an opportunity to support the IAAF Silver Label race while contributing to its growth.

The 33-year-old returns to her homeland this week to tackle the new course alongside her sister Nesrine. The Beirut theme of peace and unity resonates well with her and there was no hesitation in accepting an invitation to run.

Beirut comes just five weeks after her latest record-breaking performance at the Chicago Marathon. In the ‘windy city’ she knocked five minutes off her previous record with a time of 2:39:21.

“My sister will be there,” Njeim says. “So I am very excited. I always get excited when I get to run the same streets of Beirut as her. I am very happy that I am healthy and I can step on that line and be there for everyone and what happens happens. I don’t have expectations for Beirut It’s just more what I have left in me (from Chicago). I am just excited to be there and to be supportive of everyone.”

Despite the fact she is such a popular figure in Lebanon, after all she represented her country in three successive Olympic winter games as well as the 2016 summer Olympics in the marathon, Njeim feels no pressure to perform. Her Chicago marathon performance indicated she is capable of much more but that might have to wait.

The dramatic improvement at this year’s Chicago marathon came about after a coaching change.

“I changed coaches this year and am training with a great team here in Illinois,” Njeim reveals. “The coach, Michael Lucchesi, was very good at keeping me healthy but at the same time giving me all this mileage to run. He has been pushing me to be my best.

“Coming into Chicago this year was the first time I have ever felt ready mentally and physically running a marathon. Everything about it kind of clicked and felt so perfect. I still cannot believe it. I think that’s a good thing, right?”

These days she works for a Chicago capital venture group called Livongo Health and says the support she receives from her colleagues is a contributing factor to her recent success. Fitting in her training around work has been a worthwhile adjustment.

“I live about an hour from the office,” she explains. “Every morning I have a backpack on and I do my morning run to the office and then shower at the office. And then I start work at 8 o’clock. At the end of the day I change and run home. That’s how I get my mileage in.

“That fits in my schedule and my husband never even knows that I run because that’s how I commute. Instead of taking a train or a bike I run to and from work.”

Several times a week she meets up with her training group along the running path and they do their hard training sessions together. Wednesday morning Coach Lucchesi meets the group at 5:30 a.m.

“I always have someone to meet on the path,” she reveals. “My teammates are great; we are always on the same schedule. It’s comforting when you wake up in the morning and know that you have someone who is doing the same thing as you and is waiting for you. It’s very helpful.”

Having started her athletic career as a downhill skier she laments the lack of time available to enjoy this sport though she admits she returned to Lebanon to ski there a few times last year. For the moment though marathon running is her focus.

“My goal is always to improve no matter what it is,” she declares. “Hopefully next year I can try to beat 2:39. But my long-term goal is to go back to the Olympics in 2020. It’s in the back of my mind.

“I will do Chicago next year and try to ‘PR’ again and from there go probably to Houston and try to qualify for Tokyo. In Lebanon the qualifying period doesn’t open up until January 2019. Every day you PR  it’s a good day!”