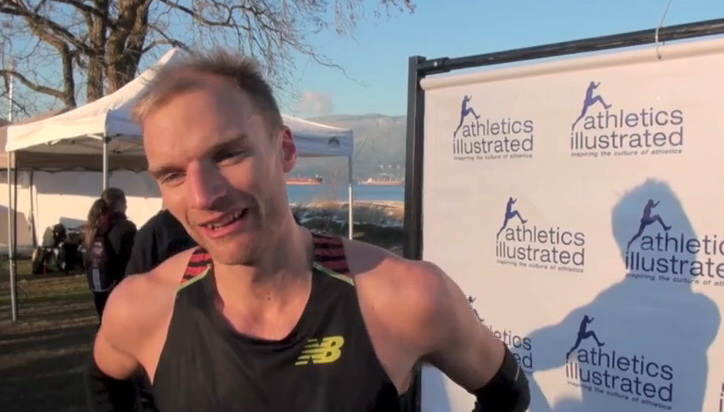 Canadian steeplechaser Chris Winter, of Vancouver, BC is aiming to do well at the 2012 Canadian Cross Country Championships that will take place in his hometown, just blocks from where he currently lives. The championships happen Saturday, November, 24th at Jericho Beach.

If he does well at nationals, then he may be off to NACACs and potentially the 40th annual (now semi-annual) IAAF World Cross Country Championships which will take place in Bydgoszcz, Poland on Sunday, the 24th of March 2013. First things first, he needs to hurdle nationals. He will have good competition having to compete with 2012 London Olympians Cameron Levins, Mo Ahmed as well as Kelly Wiebe, and potentially Simon Bairu (undecided at this time) who was set to run the New York City Marathon until it was cancelled.

On Saturday, Oct. 27th Winter out-gunned Geoff Martinson for the win at the British Columbia Cross Country Championships. Martinson, no slouch himself, had competed in the 2011 Daegu World Track and Field Championships and narrowly missed competing in the 2012 London Games in the 1500m distance. Nationals will offer one of the deepest fields in recent history.

Winter trained with Speed River Track and Field Club in Guelph, Ontario, and continues to be coached by Speed River’s head coach, Dave Scott-Thomas. Winter also ran for the NCAA Div 1 University of Oregon Ducks. Prior to arriving at the University of Oregon, he was a two-time member of Team Canada competing in the World Junior Championships teams both in cross-country and track and field, and was a three-time top-five finisher in the Pac-10 Championships steeplechase.

Christopher Kelsall: Did the BCs race play out as you planned? It appeared that you had a somewhat conservative start. Was it conservative or was the pack just waiting for Blair Johnston to come back to the group?

Chris Winter: BCs played out almost exactly as planned. I was also coming off a pretty intense two weeks of training back east in Guelph, Ontario with Speed River Track and Field Club, so I wasn’t sure how the legs were going to feel, and I knew there was going to be a solid field in the race including Geoff Martinson, Sam Pawluk, Ryan Brockerville, etc. so I was going to have to play it smart. I hung back over the first 6K, getting a feel for the course and seeing how the other guys were feeling. With 4K to go Geoff started to apply some pace and pretty quickly he and I had broken away from the others. We battled back and forth for a couple of kilometres before I was able to pull away over the last mile or so. I felt really strong that day and with a few more solid weeks of training, I am really looking forward to having a great race at Canadian Cross Country Championships down at Jericho Beach.

CW: Yeah! I was having a laugh with Sam Pawluk on a long run the other day that we are all getting to the point in our lives where we are no longer running for our universities and are having to do the part or full-time job thing to support ourselves while we chase our dreams…. bunch of blue-collared runners we are! …but on a more serious note I know Geoff had a tough year last year and was super close to making the Olympics (something I am familiar with) so I am just happy to see him still at it.

CK: During our post-race video interview you mentioned that you have moved back after being away for years. Are you going to school in Vancouver too? Are you back permanently?

CW: I have moved back to Vancouver permanently which after spending eight years away (five years in Oregon, three years in Guelph) is really exciting. I love this city and I feel like I am getting to know it all over again. I live about a mile from Pacific Spirit Park which has some of the best trails I have ever run on and I have done quite a few workouts down at Jericho Beach, which is gorgeous.

I am currently working for the same Digital Marketing company I was working for in Guelph, Inbox Marketer, and I will also take a position with the Vancouver Sun Run over the winter. I’ll work these two jobs while looking to have a big track season this spring where I hope to qualify for the World Track and Field Championships next August in Russia.

…Oh yeah and I am still a part of Speed River, I’m just heading up the Vancouver Division of the club.

CW: They are. Inbox Marketer was founded 10 years ago and was primarily an Email Marketing company (Not Spam) but has expanded into other forms of digital messaging like Mobile, Social, and the web. They are a great company that has been super supportive of my running, giving me the flexibility I need to train and compete at a high level; thanks Inbox!

CK: Nice plug, you mentioned that you are hoping to make the Canadian team for World cross. Will you also do NACAC?

CW: If I do in fact qualify for worlds I will have to discuss with DST (Dave Scott-Thomas) whether I go, as we have already discussed the challenge that exists when you are trying to run a 12K event in March and then a fast 3000m steeple a couple of weeks later in April, but we will cross that bridge when we get there. That said, I believe there is some kind of a rule where if you want to run world cross you must compete at NACAC, but again we will have to figure that all out after Nationals.

CK: Competition looks fierce for you at nationals with Cameron Levins competing. Because the NY Marathon was cancelled we may even see Simon Bairu – did BCs give you an indication of having another gear, yet?

CW: Yes looks like we have an awesome race brewing up for this year’s nationals. With guys like Levins, Mo Ahmed, and Bairu all racing, plus a handful of other solid runners like Kelly Wiebe, it should be a great battle up front. I felt really strong at BCs and with the way things have been going in training I think that I can definitely be in the mix. It should be a blast!