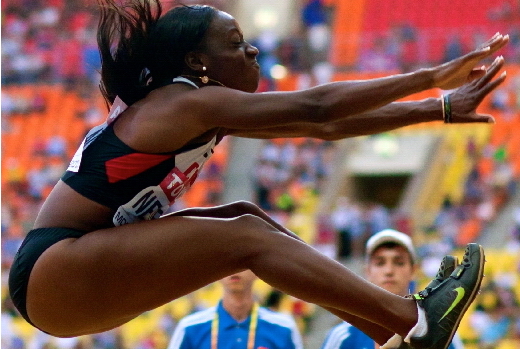 At just 23 years of age, Christabel Nettey of Surrey, BC is already one of Canada’s all-time best long jumpers. She owns the number one and number two national indoor jump distances, having recently set her new best of 6.78m on January 24th in Albuquerque, New Mexico.

Her outdoor best is second all-time nationally at 6.75m from 2013 and just seven centimetres shy of Tabia Charles’s national outdoor record of 6.82m set in Chania, Greece in 2008.

Nettey earned the bronze medal at the 2014 Glasgow Commonwealth Games and was just seven centimetres shy of gold. She competed in the 2013 IAAF World Track and Field Championships. Currently she attends Arizona State University.

Christopher Kelsall: We know your sister Sabrina is an excellent athlete. Are your parents Eustace and Genevieve athletic?

Christabel Nettey: Neither of my parents is overly athletic, but my dad was always into health and fitness he would make my sister and I go jogging with him which is probably the earliest form of training I had. He also did marathons for fun.

CK: Sounds at least modestly athletic and a good foundation for developing discipline.

CN: Ha-ha I guess. He wasn’t fast though. He definitely takes credit for the jogging. I used to hate it but I couldn’t get my allowance until I did it.

CK: Embarrassing too I bet, to be seen out running with Dad. Oh the infamy.

CK: How much was your allowance? Was it worth it?

CN: Five dollars a week. I think it was worth it even though I still hate jogging or any type of long running.

CK: In Surrey or Brampton?

CN: Surrey, I moved from Brampton when I was two years old.

CK: Did you play other sports growing up in Surrey?

CN: I played every sport because my dad was very into fitness. I figure skated, gymnastics, swim club, basketball and volleyball. Track was the last sport I picked up.

CK: Your parents are from Ghana. Did you grow up learning the language and culture or did your parents instill Canadiana into your life?

CN: Not the language, but the culture definitely. I would say I am a good mix of Canadian and Ghanaian.

CK: How was Johnston Heights Secondary for your development towards making it into the NCAA?

CN: I never really practiced with the JH team I was a part of a track club that I trained with under Mike Murray for my high school years. He was a Canadian National coach before then and having worked with Olympians he basically set me up mentally and athletically to be successful in NCAA.

CK: Your performances of late have consistently been getting better. Is this just an indication of time spent in your event training and jumping internationally or have you recently changed something technical?

CN: I opened up 2015 with a solid three attempt series all three jumps were above my previous indoor bests and the 6.78 is actually an all-time personal record. I think it’s definitely a mix of both, dialing in and fixing a lot of technical details such as my take off angle and hitting specific positions throughout my run, the worst is probably throwing my head back at takeoff. Also I’ve definitely pushed myself harder through this year’s fall training. Last year was my first year at the World Athletics Center (WAC) and I think my coach let me slack off a bit especially since I was the only female jumper. This year I have a good group of girls to train and compete with so there is a lot of good energy that I think I was missing last year.

CK: You were just seven centimetres away from gold at the 2014 Glasgow Commonwealth Games. In reflection are you happy with bronze or do you spend time thinking about those seven centimetres?

CN: Glasgow was a whirlwind for me mainly because I started off leading the first two rounds which I never expected. I think the biggest shock was getting passed in the sixth round. At the time when I was in the medal ceremony I was happy and very excited to be able to get a medal, but reflecting on the meet I am disappointed that I wasn’t able to respond under pressure circumstances, but I think some of that comes from being in more of those situations.

CK: You just broke your own Canadian indoor record. What are your distance goals this spring, when you move outdoors?

CN: I’m never really focused on numbers for the most part I’m always just trying to keep improving. Although 7m would be a big accomplishment. What’s more important to me is placing at major champs because a lot of times the performances at champs aren’t necessarily season bests or PRs.

CK: Can you take me through the achievement of the Canadian record? How did the event play out?

CN: I was competing in New Mexico which is actually one of my favourite venues to jump indoors in, so far. It was my first meet this year and so I really didn’t have too much expectation of myself but I was hoping to get close to my PR. I opened the series with a 6.62, which is the exact jump I had the previous year when I set the Canadian record, so that was pretty exciting. Technically the jump was a little sloppy as my run wasn’t as solid as it had been in my last few practices and I fell out of my landing early. Attempt two was 6.78. I was honestly shocked to PR by so much in one attempt but I knew immediately that I had got the Canadian record which was my goal by the end of my indoor season, I just didn’t expect it so soon. My third attempt was 6.72. I didn’t have anything to lose at this point so I basically just let go. I originally planned to take all six jumps, but I decided to stop after three because I didn’t want to push it and I had pretty much accomplished anything I could have wanted for a season opener.

CK: Had you even heard of the gold medallist Ese Brumme before the Commonwealth Games? She seemed to come out of nowhere.

CN: No, I never heard of her before, but I think that’s what is so fun about track and field, things are always shifting around …some favourites don’t make a final and people who were never expected to, do. Once the final comes around you really can’t count anyone out because anything can happen. 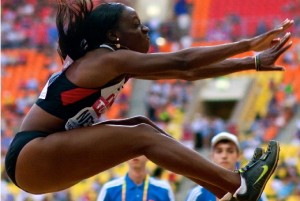 CK: You competed at a high level in the 60m and 100m hurdles until 2010. Are the hurdles or any sprinting events behind you now, or do you think you may make an attempt again? Has too much time passed?

CN: I’ve always loved hurdling and for a while it was my stronger event I think as I went through college and my long jump started developing faster than my hurdles it was natural to focus more on jumps. But I would love to hurdle again even if it’s just an indoor season.

CK: What has to happen for you to compete in the sprints or hurdles? Would you make an attempt, once you have any necessary seasonal long jump qualifying out of the way?

CN: I’m not too sure, I think when the time is right and when my head is in the mind-frame to tackle hurdles again I’ll get back to it.

CK: What can you tell me about Team Next (I am Next)?

CN: Team Next is a team of 67 athletes’ para and able bodies from across Canada who have the potential to make the Para/Pan-Am Games this summer in Toronto. It provides financial support, mentoring from some of Canada’s top Olympians as well as just the ability to meet other athletes in Canada on the same level in different sports. Without the program these things would probably never happen.