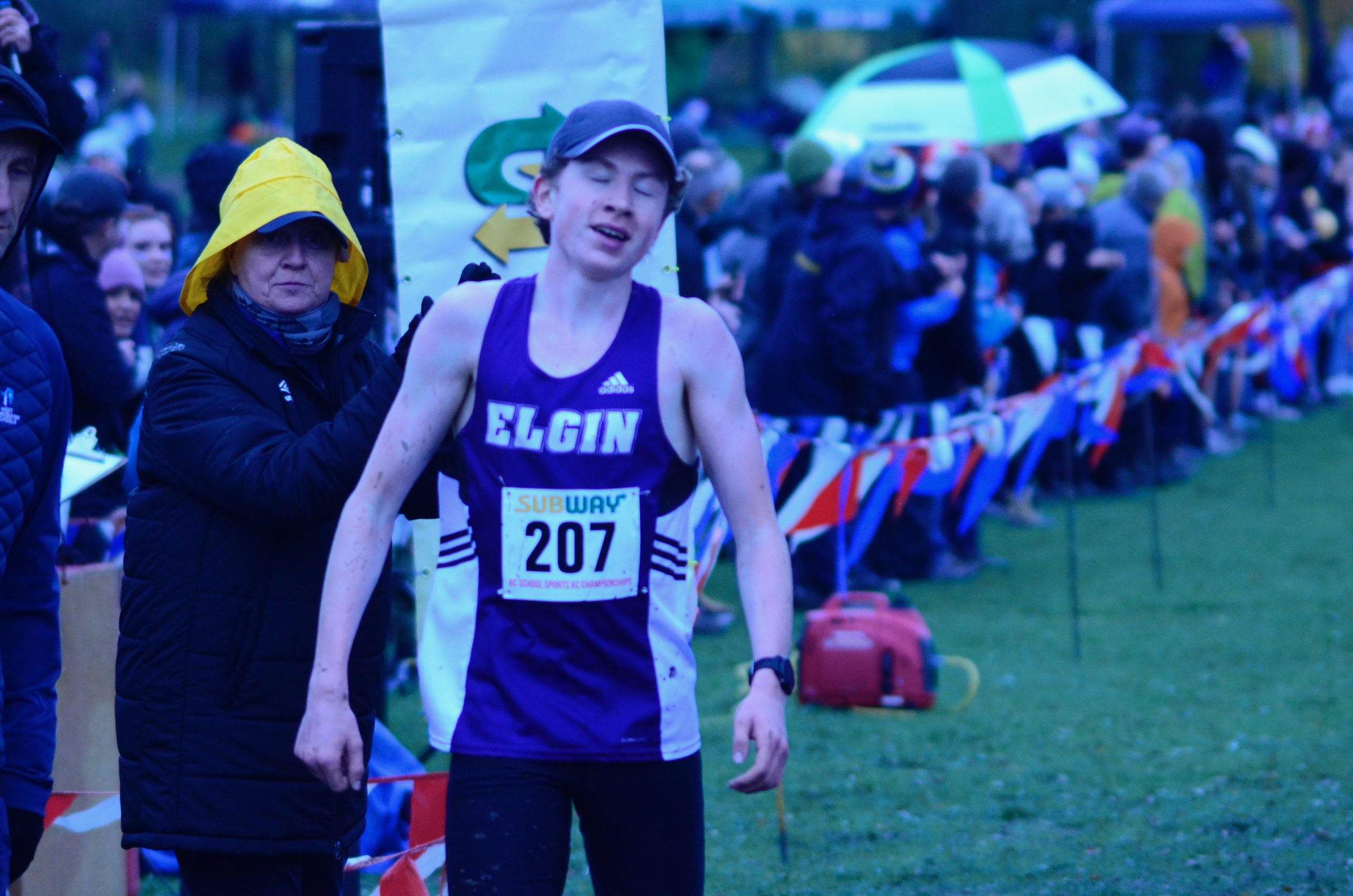 Vancouver’s Jericho Beach offered classic cross country conditions for the annual BC High School Cross Country Championships on Saturday. By the time the senior boys race got going at 12:30, nearly 700 runners had already tenderised the curvey and wet 2K loop. Long spikes were the order of the day.

Connor Nichol and Ruby Broadbent raised eyebrows and dropped jaws as senior champions, neither of whom are in Grade 12. Nichol is in Grade 10 and Broadbent is a 16-year-old Grade 11 student.

Cross-country brings out the community. Spotted amongst the crowd was Sydney Olympic gold medallist Simon Whitfield. During his Olympic run of three in a row, he raced the national club cross country championships on the same Jericho course. The retired triathlete now is a standup paddleboarder. Whitfield has been known to SUP in sketchy conditions and over long distances including making his way in and out of the Gulf Islands ferrying “everything but the kitchen sink,” as he describes a camping trip, where one yachtsman questioned his sanity in the choppy straight. The yachtsman had no idea who he was dealing with, “avast with your gas guzzler, mate.”

Newly married and soon-to-be-married Olympians John Gay and Luc Bruchet were spotted as was two-time Olympian Bruce Deacon among many other current and former international athletes and university recruiters. Hundreds of spectators braved the cool, windy, and sometimes raining conditions.

The future looks bright, especially for Elgin Park Secondary, a school that competes in the South Fraser zone. Their second senior boy, James Hodgson, finished 7th. He also happens to be in Grade 10. Four of their top-5 that count towards team scores finished in the top-13. The other two were Kaelem Dumont and Isaac Baker who finished 11 seconds apart. Brayden Dumont, Justin Cai, and Aikim Sahota rounded out the team for Elgin Park.

“This win means everything to me,” said Nichol.

Nichol was not satisfied with finishing second in the zone meet as well as how he raced at BC Club Championships in Victoria at Beaver Lake, which he had won. Saturday’s victory was redemption. The team win was just as important. The team celebrated boisterously as they were awarded the championship cup.

Finishing second was Tion McLeish of St. Michael’s University School (SMUS) in Victoria. Caiden Lee, who won the BC Club Championships – and Nichol’s “biggest competitor” – dug deep but finished third. McLeish finished third behind Lee and Yelane Mulugets in Victoria. To be fair, McLeish was fresh off the Island High School zone meet three days prior and had a heavy week of studying. He looked fresh Saturday.

“My plan was to draft behind Caiden and Tion and then for the last kilometre of the race, which is partially downhill, I was just going to go fast and start my kick,” shared Nichol, when asked about his tactics.

Asked if he was surprised that he finished in front of Lee, Nichol said, “Yes, Caiden has been my biggest rival, so I am so surprised.”

He agreed that with Hodgson and him being in Grade 10 that they have a dynasty in the making, they may just three-peat. He simply said, “yeah.”

“My coach at Ocean Athletics is Ted de St. Croix and I cannot forget my Elgin coach Mr Weiss. He has been doing everything for me. He told me to visualise this race. And visualise what could go wrong…and nothing did,” he added.

“First of all, I want to thank my family, my friends, especially my coach, my parents and my school for funding us to come. The organization at the meet was just phenomenal and what we had from mother nature, well it’s cross-country,” said McLeish. “I am only here by the grace of God, so I can’t be more appreciative.”

Ruby Broadbent absolutely controlled the senior girl’s race. Well, there was nothing to control, rather she simply dominated from gun to tape. Broadbent went steady to start, which put her in the lead, worked hard in the middle of the race, and then finished looking like she could do it all over again. It was a tremendous display of fitness by the 16-year-old Parklands Secondary student. The domination this time didn’t surprise anyone. She displayed the same fitness at the provincial cross-country championships in Victoria the week prior.

She is coached by Dacre Bowen, who also coaches McLeish.

“I tried to make the first kilometre as easy as I can for myself and then with the middle I try to pick up the tempo a little and just finish strong at the end.” shared Broadbent.

Asked what his motivational speech sounds like, Broadbent said, “he just tells me to go and run my race and to beat them with my tempo.”

Coming back stronger this week from her race the week prior, Chilliwack Secondary’s, Christina Peet Williams, finished one position better in a deeper field. She kicked strongly as did third-place finisher Ella Ballard of Royal Bay Secondary on Vancouver Island. The three finished in the time of 17:42, 18:20, and 18:22, respectively.

“I tried a bit of a different tactic today, where I sat back with the lead group. When I had that extra strength and they were tiring, I just picked them off one by one,” shared Peet Williams. “I think it’s good for the self-esteem when I pick people off one at a time, rather than getting passed,” she laughed. “It just felt good the entire time. It was a good race.”

“I felt good about it for sure.”

Teammate McLeish commenting on Broadbent said, “She has been killing it. She is a super good soccer player, but she is just a phenomenal athlete. Her grit and pace are just unmatched by anyone. It would be good to watch her at nationals. I think she will be good.”

Hodgson clocked a 17:06 finish time over the two-lap 4K course. The junior boys and girls run 4K, while both seniors raced 5K.

Hodgson said, “my tactic going in was to start really fast and just try to keep the same pace throughout the race.”

“It was really muddy everywhere. There was one part where there was this big pond that you had to run through and that was definitely difficult.”

Pacific Academy’s Max Holmes took the win in the time of 15:49. Finishing second and third, were Elijah Headley of Maple Ridge Senior Secondary and Steph Snyman of Regent Christian. They recorded finish times of 16:03 and 16:08, respectively.

It was a strong race by all three. Snyman, who has a compact Steve Prefontaine style of running, according to one onlooker, was just looking for top-10 and maybe top-5 placing. Finishing third was beyond his expectations and he was quite pleased with the result. Snyman was the first Grade 9 student across the finish line.

Holmes won his South Surrey zone, then went on to finish fifth at BC Clubs in Victoria. It was a strong showing for the Grade 10 athlete.

“It was hard. The start was super crazy. Everyone went out very, very fast. So it was a matter of just picking them off one by one.”

Regarding the conditions, Holmes said, “this is what cross-country is about, getting wet, getting in the mud and the dirt, having a good time.”

Despite not having a U16 category he is going to Ottawa to race the national club championships on Nov. 27.

“It was a really good race, there was really good competition and I really enjoyed racing here,” said Snyman.

All was calm leading up to the first race of the day in the para division. Once the gun sounded, not only did the runners get moving, so did the rain. The hardest rain of the day started with the gun, then stopped as the athletes crossed the finish line. It was a cruel move by mother nature.

Bennett Rehman could hardly feel his hands as he made his way into the long finish chute for the final sprint.

“My tactic was to start slower at the beginning and then move forward in the race from there. It really paid off and my coaches have really trained me well. I am so thankful for them. I have never been first before, so it is an exciting time for me,” shared Rehman.

Rehman clocked a 10:36 finish time, nearly a minute ahead of his closest competitor. The top-three was rounded out by Ronin Weins and Chima Obi.