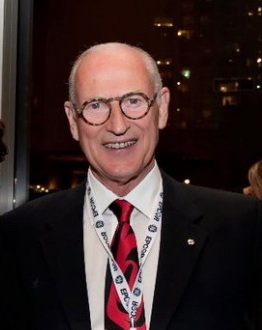 Dr. Doug Clement is ever present in the Canadian Athletics scene. He is the cofounder of the  Harry Jerome Track Classic in Vancouver, BC  and is the Achilles International Track and Field Society President. His media releases are often and many, promoting the accomplishments of Canadian athletes domestically and abroad.

Recently Clement has been working with Athletics Canada in developing the National Track League. The inaugural year is 2011, with the league taking place in major centres across Canada, from Victoria, British Columbia to Halifax, Nova Scotia, starting June 29th in Edmonton, Alberta and wrapping up in Toronto, Ontario, July 13th.

Clement enjoyed an exceptional career as an athlete in high school, which he parlayed into a Bachelor’s Degree at the University of Oregon. He attended Oregon from 1952 through 1955 on a track scholarship.

Clement competed for Canada at the 1952 Summer Olympics and the 1954 British Empire and Commonwealth Games. He finished fourth in the 4×400m relay. At the latter he placed eighth in the 880 yards event, but earned a silver medal in the 4×440 yards relay.

He returned to Canada to attend the University of British Columbia (UBC) for a medical degree, but also remained athletically active, participating on the school’s rugby and track teams. He also made second appearances at the Summer Olympics and the British Empire and Commonwealth Games in 1956 and 1958 respectively. At the former he finished fifth in the 4×100 m relay. He retired from active competition after graduating from medical school in 1959.

The Doctor, the Author and the Coach

Clement then embarked upon a prestigious career as a medical researcher, but always kept his athletic roots at the center of his studies. In the late 1960s and early 1970s he founded the study of sports medicine in Canada through a series of papers and spread his teachings through teaching tenures at Simon Fraser University and UBC and the founding of a sports medicine clinic in Vancouver. In 1962 he and his wife Diane helped found the Richmond Kajaks track club and coached top international athletes for over three decades.

He also coached track at UBC during the 1980s and has attended numerous international competitions in capacities ranging from coach to manager to medical staff. Among his numerous awards are inductions into the UBC and British Columbia Sports Halls of Fame, as well as the Canadian Olympic Sports Hall of Fame. The author of several books and numerous articles on the subject of sports medicine, he was made a member of the Order of Canada in 1992.

I recently had the opportunity to communicate with Doug about his role in the development of the new National Track League.

Christopher Kelsall: Can you describe what your role is with Canada’s National Track League?

Douglas Clement: I was part of a meeting in Ottawa in early 2010 when the concept of the NTL was conceived by the organizers of existing international competitions in Victoria, Edmonton, Halifax and Vancouver. Brent Fougner, Peter Ogilvie, Kevin Heisler and myself brainstormed the vision of a series of linked international meets across the country along with Mat Gentes of Athletics Canada. Toronto was represented initially in the ongoing discussions by Atlee Mahorn and as plans evolved by John Craig. Things have progressed rapidly with the leadership of Athletics Canada to provide sea to sea opportunities for Canadian athletes to gain valuable international experience right here before Canadian audiences.

CK: Is the leadership of Athletics Canada something that came after the conceptualization? How is the “leadership” manifested?

DC: Mat Gentes has been the communicative hub, keeping the information flowing to the NTL meet organizers.

CK: Do you anticipate larger crowds at the established events? Is there a greater emphasis on marketing the meets and the league? What may that look like?

DC: Difficult to anticipate any time, as advance publicity and weather are big factors.

CK: Is the committee in talks with any Canadian networks to broadcast the meets?

DC: Efforts are being made but there is no information to suggest an NTL common policy. Flotrack is expected to provide streaming video at least for some of the western meets.

CK: The National Track League takes place over a short period of time and covers a great deal of real estate – both ends of the country. Are there any plans to expand the time frame in future years?

DC: Initial plans in 2011 and 2012 would cluster the NTL events following the the Nationals in Calgary. This led to the dates of Edmonton on June 29th, Vancouver on July 1 and Victoria July 3 with Halifax and Toronto on July 10 and July 13. As Moncton is next to organize the Nationals in 2013 and 2014, the eastern NTL events would follow in the period of late June and early July with the western NTL to be mid and late July in Edmonton, Victoria and Vancouver. Expansion of the NTL to other cities is possible as Montreal, Moncton and Kamloops have exhibited some interest.

CK: The league I understand is to help athletes develop domestically however, there is fair prize money available. I assume this will attract a higher-level athlete. Do you feel that the dollars will reach the developing athletes?

DC: Yes the prize money will be distributed fairly across each of the NTL designated events. We should be realistic; track and field is far from a “professional” sport. The amount of prize money will be of some help to covering the myriad of expenses that our athletes face.

DC: No, the selection of events tended to focus on Canada’s events most highly ranked internationally. For this year the events are:

CK: Who are the main contributors to the prizing?

DC: Athletics Canada through Brian Levine of IMG Canada is seeking national sponsorships with financial backing of the Athletics Canada Foundation. The overall prizes are open to Canadians only.

In terms of seeding for events that will have multiple sections (e.g. 100m), the field in the A section will be at least 50% Canadian (i.e. at least 4 Canadians (top 4 seeds) would be in the 100m A section).  The remaining sections (i.e. B and C sections) will be seeded based on performances only.  For the Final, the 50% Canadian content would consist of the top seeds based on the NTL scoring race, and not performance seed (i.e. in the 100m A section the top 4 in NTL points would comprise the Canadian entries).

Prize money will be awarded to the Top 3 athletes in each NTL discipline.

If there is a tie, the following tie-breakers will be used (in order):

CK: Is there a document indicating qualifying standards for would-be competitors?

DC: No this is not defined centrally but it is the responsibility of each NTL meet’s invitation chair to select their fields. Best contact for all is through: www.nationaltrackleague.ca

CK: You seem passionate about the sport of athletics as I see your media releases that promote performances of Canadian athletes all the time. Do you continue to coach these days?

DC: No, after almost 40 years of coaching, I have not been to a single practice since I retired over 10 years ago. I personally feel that coaching is the same as competing. You cannot help the athlete reach their full potential as a coach unless you demonstrate 100% commitment to their goals. I have not lost my passion for the sport, just channelled it towards contributing to the promotion of track and field through the organization of competition with the help of all the members of the Achilles International Track and Field Society. This started in 1964 with organization of the Olympic Preview at Empire Stadium, which created the opportunity for several teams to compete on September 19 on their way to the Tokyo Olympic Games. This lead to the creation of a series of indoor and outdoor meets in Vancouver, which morphed into the Vancouver Sun Harry Jerome International Track Classic. The Jerome is now in its 28th year.