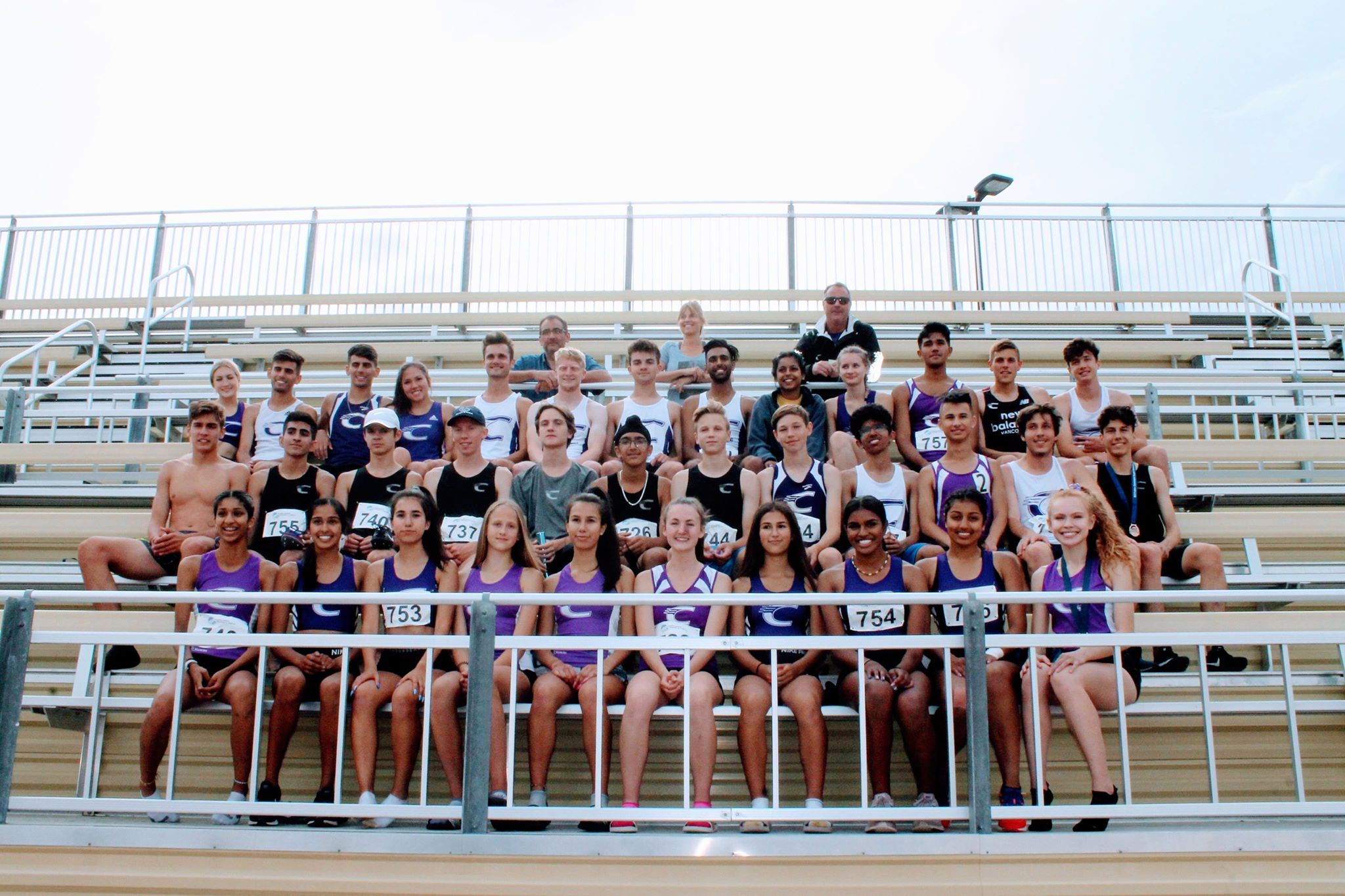 Greater Vancouver or the lower mainland, as it is often referred to, is a hotbed of Canadian distance running.

There are several robust run clubs and competitive training groups located throughout the area. Some are well-established and others fairly new. The surroundings for distance training is rich, with the lush North Shore and Coastal Mountains, a plethora of forested trails, parks, and pathways near water – it’s a temperate paradise most months of the year.

[For a full list of clubs visit BC Athletics at www.bcathletics.org/ClubFinder/]

This is Coastal’s 10th year running.

During the past decade, the club has produced a number of athletes that have gone on to successful USport, NAIA and NCAA careers.

Before Coastal was founded, club president Scott Kent coached track and cross country at Kwantlen Park High School while his kids Justin and Brittany attended. The school did not have a coach at the time, so the former competitive athlete jumped at the opportunity.

“I then joined Ocean Athletics in 2008, but I had different plans for coaching than they did. I soon found out that if I wanted to continue coaching middle-distances, I would have to go elsewhere,” said Kent. “So I got together with 12 other families and formed the Coastal Track Club. We set up shop at the same South Surrey facility and we have been going strong ever since.”

Asked about running over to his coach directly after winning, Tiwana said, “He has been coaching me since Grade 9; I owe everything to him.”

Tiwana wasn’t the only Coastal athlete performing well. At BC clubs, teammate Jeremiah Mackie finished in third place and Haley Ribeiro won the U20 women’s race. A number of Coastal athletes medalled at the meet.

His son Justin Kent, who is now with the BCEP, ran with Coastal through to his third year at university.

For the University of British Columbia Thunderbirds, he won the national NAIA 3,000-metre steeplechase title. On Oct. 13, Justin Kent broke Gary Barber’s GoodLife Fitness Victoria 8K event record that stood for longer than he has been alive.

There have been many others.

There have been dozens of provincial high school senior medallists over the years such as Rachel Mortimer who joined Coastal in her Grade 11 summer and won two bronze medals at those championships with two new personal bests in 1500m and 3000m run in 4:38 and 10:10, respectively. Tim Delcourt won BC HS cross and medalled in multiple events. Tanner Carnegie, Tyson Baker, Aiden and Riley Miller, Sterling Ginther, Liam Foster, and Nathan Goodwin all medalled at BC HS – the list goes on.

Declan White had a strong USport career joining the Trinity Western University Spartans having already run 1:51 in the 800m event, 3:45 in the 1500m and 8:19 in the 3000m indoors. White came back to Kent each summer to continue their coach-athlete relationship and between the two, as well as Mark Bomba, coach of the Spartans and now Langley Mustangs Endurance Group, White went on to medal at both the 3000m indoor and Cross Country USport Championships.

Adam Paul-Morris won the USport 600m indoors in 2014 with a time of 1:18.85. Kent coached Paul-Morris through most of his engineering degree where he produced times of 48.09 in the 400m and 1:48.09 in the 800m. Paul-Morris represented Canada the following year after he moved to Victoria and competed for the University of Victoria Vikes.

The 2018 clubs and high schools champion – like Tiwana in 2019 – was Woolgar. Woolgar, sensing that his teammate was going to win the same back-to-back meets, as he did, made a placard declaring Tiwana as the GOAT (Greatest of All-Time). Woolgar made sure Tiwana saw the sign as he ran with him at various points throughout the race holding it up and then met him in the finish chute. The placard also referenced teammates (Jeremiah) Mackie and (Michael) Miller as the “King” and the “Killer”, respectively.

Asked about his experience with Kent, he said, “Scott really makes a good personal relationship with the athletes and wants us to achieve our full potential. He gives us tough workouts in big training blocks but is able to help us peak very well for big races by lowering intensity.”

Before success found Woolgar, he suffered knee issues apparently related to overuse in soccer, but like Tiwana, he moved up through the field rapidly from one year to the next.

During his very first foray into running, Tiwana quit in Grade 8 after one practice – it was too hard. After joining Coastal the following year he finished 80th. After extensive work on his form, he then followed that up with a fifth at junior provincials. Tiwana placed fourth as a Grade 11 senior, then won the title in 2019.

“Woolgar met me after BC HS cross countries in his Grade 11 year where he finished 31st. He lives in Richmond (60-90-minute drive). He was wearing knee braces and I nicknamed him Forrest. By the Vegas spring break training camp that we put on, he broke free of them and by BC track champs he was 7th in both 1500m and 3000m with a dangerous kick. One year later, he won. This year, he might be as good as top-3 in Canada,” shared Kent.

He, with many of the other Coastal athletes, will be racing at the national cross country championships, Nov. 30 in Abbotsford.

Asked about his training philosophy Kent said that he approaches the (Sebastian) Coe method when athletes are in their younger years, and then moves towards (Arthur) Lydiard as they mature.

“Quality before volume at the younger ages,” he said. “As the body matures and can handle the higher volume at the right targets I subscribe more to Lydiard.”

Kent himself was exposed to high-level coaching when he was a competitive athlete. During the 1980s and 1990s, he was coached by Dr. Doug Clement for 16 years and later moved to well-known UBC Thunderbirds track and cross-country coach Marek Jedrzejek. Clement was an Olympian and later started the Vancouver Sun Run which is one of the largest 10K road races in North America. He also created the Harry Jerome Track Classic that takes place in Burnaby at Swangard Stadium each summer.

Kent learned from adept coaches and he wasn’t afraid to hang with the best, as he roomed with the likes of Simon Hoogewerf, former national record holder in the 800m at 1:45.4, and Ian Newhouse who was running as fast as 1:46.88 at the time.

Emulating Clement and Jedrzejek, in 2015, the Vancouver Province awarded Kent the reader-voted Head of the Class, Coach of the Year. At the time, the Province’s Howard Tsumura wrote, “For Kent, a 12-year Surrey fireman, it’s about instilling the joy of running in kids…

…yet in a more literal sense, as his nominator Simran Sarai so loquaciously stated: “His full-time job is as a firefighter. He comes from saving people’s lives to helping make ours better. Last year, he showed up at one of our races in his uniform driving, you guessed it, a firetruck.”

For Kent though, the lower mainland is not just a hotbed for running, the more kids who run, the more who will rise to the top and the more he can help grow to be better people.

“The stable of quality athletes that I have had the privilege to coach over the past 10 years has been amazing. Even the Sevsek twins, Julie and Christina, I only coached them for a year and a half before they went off to university but they were awesome. They finished second and third at the BC High School Cross Country Championships and medalled in the 3000m track event during their Grade 12 year, which is pretty amazing. They are just great people too.”

Asked why he continues to coach, Kent said, “Dr. Clement and the amazing group I had the privilege to train with during the ’80s and ’90s laid the foundation of who I am today and the reason I fell in love with this sport. It has given me so much. At a point when my kids showed interest, I knew it was time to give back. I continue to give back to this sport because I love what I do, and I still have the passion inside.”

Despite his successes, he remains humble, for example, he is often heard saying, “I am one coach but not the only coach”. This is him saying that he feels blessed with the kids that he has gotten to coach.

“I have come to realize,” he pauses…. “I am not the only coach out there.”