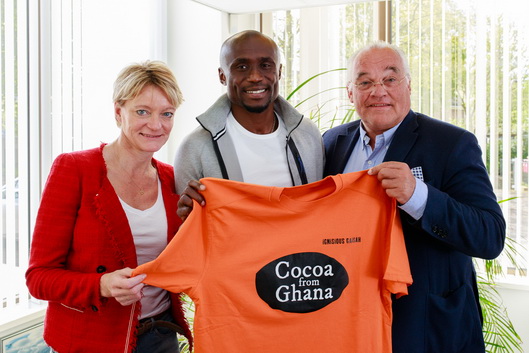 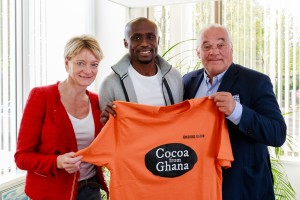 Company, Cocoa from Ghana, has agreed to support international long jump competitor and Global Sports Communication athlete Ignisious Gaisah. Gaisah was born and raised in Ghana, and now, since 2013 is a Dutch citizen.

Gaisah left Ghana in 2001 to find better quality coaching and started training in Holland. There he grew quickly into an international athletics star.

In 2007 he suffered a serious injury which had his supporting team doubt if he would ever long jump again. But through sheer willpower and a long intensive period of rehabilitation and training he came back better than before. In 2013 he won the silver medal during the IAAF World Track and Field Championship in Berlin where he jumped the still unbeaten Dutch record of 8-metres and 29 centimetres. In 2014 he won the IAAF Continental Cup.

This year Gaisah’s goal is to make a jump as long as 8m, 15cm to be able to participate in the 2016 Rio Olympic Games (5 – 21 August in Rio de Janeiro). During May he will be competing in the Diamond League event in Shanghai (14th of May), the City Jump event in Manchester (20th of May) and the Fanny Blankers Koen Games on the 22nd in Hengelo.

“I am very happy to be part of the Team Cocoa from Ghana. Together we will be able to put cocoa from Ghana on the map, as it deserves to be widely recognised. Both the cocoa industry of Ghana and I are pushing boundaries to become the best in our fields as we have the stamina and perseverance to do so.”

The company recently signed as the main sponsor for the Dutch National Ladies Handball team, which has successfully qualified to participate in the Olympics in Rio de Janeiro this summer.

Cocoa from Ghana is an initiative of the Ghanaian cocoa industry that would like to create more awareness for their product. Of the worldwide cocoa production – 4.2 million tons in total – approximately 800,000 tons originates from Ghana. Cocoa from Ghana has chosen to support a variety of sports and as in all sports you need the same quality as needed to produce a top quality cocoa: deliver your very best and work together as a team.