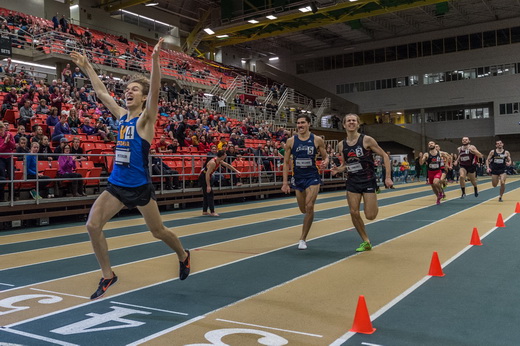 Edmonton, Alberta’s Cole Peterson capped off the indoors portion of his U Sport athletics career with the University of Victoria Vikes, exactly the way he wanted, by winning double gold.

The 23-year-old won nationals in front of his hometown crowd at the University of Alberta on Friday, March 10 in the 4 x 800-metre event, setting a school record. Setting the record is a big accomplishment considering UVic’s long tenure as a strong 800-metre distance school. The team also includes Brendon Restall, Tyler Smith and Thomas Oxland. They crossed the line in 7:30.16. Windsor finished second with a 7:30.39 performance, while the bronze medal team was Guelph who are credited with the time of 7:31.92.

On Saturday, Peterson toed the line in the 1500-metre event and won in a new personal best of 3:50.86. Laval’s Antoine Thibe finished second in 3:51.39, while Windor’s Corey Bellemo nearly tied for second, but is credited with third finishing in 3:51.40.

This is Peterson’s final season as a Vike. After several injuries and many second place finishes, the computer science student finished on a high note. For his performances, he was honoured as Canada West Male Track Athlete of the Year.

Christopher Kelsall: Talk about that 1500-metre indoor gold in Edmonton to cap off your final indoor season in U Sport. How did it feel to finally win, after all those second place finishes?

Cole Peterson: Dream come true is the most appropriate cliché. I had visualised this race all year and executed it exactly as planned. In a way, it was surreal because it happens so fast. One moment you’re consumed by your focus on the race, and then in a blink, you realise what you’ve done. The first person I saw was Rachel Francois, who was tearing up and gave me a hug. I told her to give me a minute and I’ll be tearing up too. I hugged more teammates, my coaches (Brent Fougner and Hilary Stellingwerff), and then climbed into the stands to see my family. The most incredible part of that victory was to see the emotion and excitement of the people who have supported me for years. To win in my hometown, in front of my friends and family, in my final year was something truly special.

CK: How did you execute, can you take me through the race?

CP: I wanted to be up near the front of the race to stay out of trouble and cover any move made early. I settled into third, on the shoulder of second. It wasn’t a fast first half, only 2:08 through 800m. The best move I made was to hold off Jack Sheffar going into the corner with 800m to go. If I hadn’t put in a little surge to hold my position on the rail, I might have been boxed in and lost contact with the leaders. I put myself perfect position to strike with 300m to go and didn’t have to work too hard to get there. I was able to open up my stride, go to the next gear, and take the lead heading into the bell. From there it was all about holding my form, and showing what I had left.

CK: Would you suggest that it takes time to learn that sort of patience and execution in the middle of a race and that is why you were seemingly forever a bridesmaid?

CP: Experience turns knowledge into understanding. I think having run this final more than anyone else on the starting line was an advantage — I knew what to expect and how to succeed. Additionally, there’s a certain kind of confidence that comes with age. That’s all a part of my recent success. The fitness has been there for years.

I had the privilege of running against some of the all-time greats in the CIS/U Sports. In 2015, the top three in the 1500m were Thomas Riva, Charles Philibert-Thiboutot, and Ross Proudfoot, who that summer would go on to run 3:37, 3:34, and 13:29 respectively. Those are world-class performances for collegiate athletes anywhere. The depth and quality in the middle-distances at Canadian Universities is as good as ever. In order to win you need to not only be fit, but ready to race.

CK: Speaking of execution, how about the Vikes’ 4 x 800m record of 7:30.16. The Vikes have some history; you must be pleased with that result.

CP: When I was considering coming to UVic, the Vikes men had won five consecutive 4 x 800m titles. That was the legacy handed to my generation. Despite the incredible depth of 800m talent, the Vikes have produced (we often field teams where everyone has PB of 1:50 or faster), we were unable to string together four consecutive legs that matched our abilities on paper. Windsor’s 1-2 punch of either Bellemore/Ullman or MacMackin/Bellemore has been deadly. They always seem to pull out one of their best performances of the year in the 4 x 800m.

Last year Bellemore ran a phenomenal last leg to catch our anchor Restall and out-lean him by 0.04 of a second. I reminded the boys about this in our pre-race huddle. No matter the leg, “every inch counts”. We needed to get Tyler Smith as much of a gap as possible, and Tyler used that gap strategically. Bellemore caught him but did not have enough to pass. It was relieving to wipe that school record from the board, and bring a 4 x 800m gold medal back to Victoria. It had been a long time coming.

CK: It seems like there have been quite a few Edmonton athletes who choose UVic, currently there is Tyler Smith, Rachel Francois and yourself to name a few. Why did you choose Victoria?

CP: I joke that if you win the Edmonton 800m high school championships, you eventually end up in Victoria. Karl Robertson, Nicole Soderberg, Isaac Penner, Mitch Basher, and Trevor Schiavone are other Edmonton athletes who have all run with the Vikes while I’ve been here. This acts as a positive feedback loop, seeing older athletes commit to Victoria draws interest from younger athletes. It helps too that Victoria is only a 90-minute flight away, but much warmer and greener.

It was UVic’s connection to the national training centre (which has since morphed into Athletics Canada’s West Hub), the culture of the team, and the support available at the University which really sold me on UVic. When I visited Victoria, the family-like relationship between athletes was immediately obvious. I believe success comes naturally when you surround yourself with people you trust. I trusted everyone I met in Victoria.

CK: Did you win the Edmonton 800m high school championships?

CK: Well fate was decided in Grade 10 then. What sports did you play growing up in Edmonton? When did you commit strictly to running?

CP: I played soccer as a kid, and intramural sports like flag football, but the first sport I took really seriously was alpine ski racing. Skiing was my gateway into running, I trained extremely hard in our dryland training sessions and it became clear I had a knack and drive for running. The skiers I trained with kept on saying “you should be a runner”, so I signed up for the 800m at the biggest indoor school race, the Edmonton Journal Games. There I discovered there were such a thing as track clubs, and I joined the Edmonton Harriers in the fall of 2004.

I skied in the winter and ran in the summer for a number of years. The crossroads came when I was leaving age-class skiing, and entering the FIS ranks. Making the jump was a huge financial and time commitment, and I would’ve needed to adjust high school to commit. As fun as ripping down a ski course was, I was enjoying more success running, knew I was better at it and could pursue other interests while running. By the time I turned 15, running was my only sport.

CK: Did you spend much time on Marmot Basin?

CP: When I was skiing, probably three to six days a year? Marmot is one of my favourite mountains. We trained primarily at Nakiska.

CP: I think I’m too young ski at Lake Eden, I’ve only ever known it as an abandoned slope. How do you know of it?

CK: To protect the guilty, I cannot tell you and I had nothing to do with the “controlled burn” that went on there.

CP: Edmonton actually has four other ski areas in town or just outside, Edmonton Ski Club, Sunridge, Rabbit Hill, and Snow Valley. None of them are the kinds of places you can become a good racer, though. I’m not sure if it’s still true, but at one point Snow Valley held the world record for the shortest chairlift.

CK: Will you continue to compete in the middle distances after graduation?

CP: Absolutely. My ambitions have always lain beyond collegiate athletics. I’m currently in my first of two years of a master’s degree in computer science. I’ll continue to run both next year and after the year I graduate, chasing bigger goals.

CK: Can you describe those goals? What do you feel you will need to do to achieve them?

CP: A personal mantra of mine is “foresight is 2020”. The first meaning is have a clear plan for the future and how it will come to be, the second is the aim is the Tokyo 2020 Olympics, but most importantly, it’s a play on words — have fun with it. I align my yearly goals along a pathway headed to Tokyo.

The biggest piece for me is to stay healthy: I have lost too many seasons to injury. I didn’t run an outdoor season in 2014 or 2015 due to stress fractures in my tibia. Managing my susceptibility to lower limb injury is a primary concern, and it’s a problem we’ve attacked from all angles.