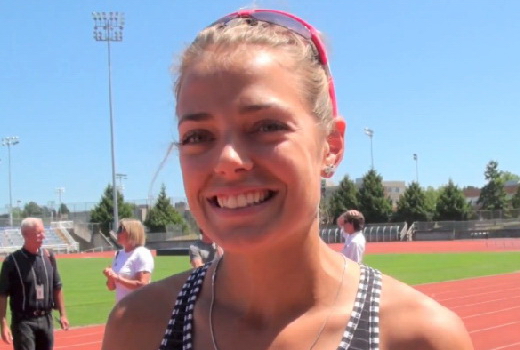 The women’s 800m team representing Canada at the 2014 Glasgow Commonwealth Games looks nearly as strong as it has ever been with Melissa Bishop of Eganville, Ontario leading way. Two teammates that she will be racing with are North Vancouver’s Jessica Smith as well as Karine Belleau-Bélliveau of Montreal, Quebec.

Bishop enters the games with the fastest personal best time of the three, as well as the best performance for the 2014 track season. She is one of four Canadian women to drop below the 2:00.00 barrier for the distance along with Canadian record holder Diane Cummins (1:58.39), Charmaine Crooks (1:58.52) and Smith (1:59.86). Bishop’s season’s best has come at a good time of year as she ran 1:59.70 in Victoria at the National Track League’s Victoria International Track Classic on July 5, 2014.  Most importantly she accomplished this excellent performance without being pushed to a faster time during the final 200m of the race. It is anyone’s guess how much faster she can run or what high placing she will attain in a championship event like a Commonwealth final. Her all-time best is 1:59.69.

Belleau-Bélliveau has run as fast as 2:02.04 in 2012. For her, making the final will be an accomplishment, whereas Smith has the ability to run with Bishop; however, she has recently battled a back injury. A positive result will be incumbent on her back health. At the Harry Jerome Track Classic on July 8th Smith finished second to Bishop, but she was over two seconds back in 2:02.08 Bishop’s finish time in that race was 2:00.06. Seven women finished within approximately half of a second of each other to make for an exciting end to Canadian record holder Diane Cummins’ career. Cummins finished in 2:02.15, two night before she ran a season’s best 2:01.38.

Bishop is currently ranked 19th in the world for times run during 2014, to date. Only five of the 18 athletes above her represent countries that are located in the Commonwealth.

The World leading times so far for 2014:

Editor’s note: Official start lists are unavailable. This is not meant to be a complete list of athletes competing in the 2014 Glasgow Commonwealth Games.

Sum, number two on the current top-five leading times list won gold during the 2013 IAAF World Track and Field Championships that took place in Moscow, Russia. She finished in a personal best time of 1:57.38. The four others represent countries that are not part of the Commonwealth, therefore will not be competing.

Kenya will also be sending Janeth Jepkosgei who has run as fast as 1:56.04, but it has been seven years since she ran that time in Japan.  During the 2012 London Olympics, she finished seventh place with her time of 2:00.19. The 31-year-old may return to her former glory as it was only one year prior that she ran as fast as 1:57.42 at the 2011 Daegu World Track and Field Championships. It appears that Athletics Kenya is not sending Pamela Jelimo, who has run a mind-boggling 1:54.01 and during the 2012 London Olympic Games she finished fourth in the time of 1:57.59. She won gold during the 2008 Beijing Olympic Games. Kenya also boasts 1:59.30 runner in Winny Chebet, but interestingly enough they are sending relatively unknown 20-year-old Agatha Jeruto, who boasts a modest personal best time of 2:00.95 and a season’s best of 2:02.29.

Scotland has two athletes that could give Canada’s Bishop a run for her money with Lynsey Sharp, who is the European Champion and owns a personal best time of 1:59.67, while countrywomen Laura Muir will be in the mix, she may not have the legs after competing in her priority distance, the 1500m, however, the British press believe that she could give Sharp good competition. Her best is 2:00.80, based on this time and the aforementioned plans to compete in the 1500m as well, she could have difficulty making the final, however, home field advantage often provides a powerful placebo effect for athletes.

More competition from Great Britain will come from 33-year-old Jennifer Meadows with her best of 1:57.93, but she hasn’t run that fast in a long time. On July 7th she managed to run just 2:00.32 in the Glasgow Diamond League meet. Nineteen-year-old Jennifer Judd of GB has run
1:59.77 and won a Diamond League meet in Oslo, Norway on June 11th, so she is rounding into form nicely. Marilyn Okoro a British-Kenyan has run as fast as 1:58.45, but she accomplished this time six years ago. For the 2014 season she has only run as fast as 2:01.57.

Jamaica may enter 1:59.93 runner Natoya Goule. Her season best is still over two minutes. She is a versatile runner who has competed at a high level in distances from 400m to the 3,000m.