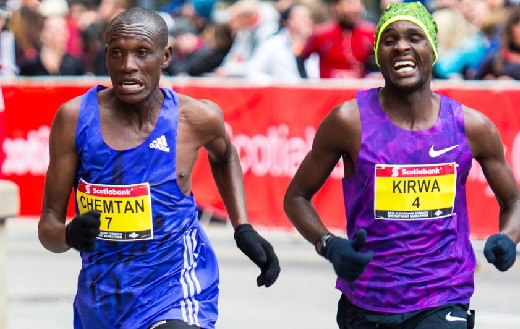 Kenya’s Isshimael Chemtan returns to the Scotiabank Toronto Waterfront Marathon in defence of the title he won a year ago. On that occasion his margin of victory was merely a stride length as the race came down to a final sprint.

Chemtan’s compatriot Gilbert Kirwa was on the receiving end of this desperate finish, a deficit that cost him $10,000 in prize money. In Toronto the winner receives $25,000 while the runner up earns $15,000.

The pair will reenact their rivalry at this IAAF Gold Label race October 16th. By no means are they assured of occupying the top podium places either.

Seboka Dibaba carries Ethiopian hopes with the 28 year old possessing a 2:06:17 personal best. Only Kirwa (2:06:14) has run faster. And, Philemon Rono, who trains in a group led by Olympic champion Eliud Kipchoge and 2014 Toronto champion, Laban Korir, is another potential winner. Rono has a best of 2:07:07.

The race will also feature several talented East African runners marking their marathon debut chief among them Aziz Lahbabi. This 25 year old Moroccan won the 2014 Rome Ostia Lido Half Marathon in Rome with a superb 59:25 and, if he has prepared adequately, his performance shall be memorable.

Abraham Habte is the first Eritrean elite to compete in Toronto. Although he has completed a marathon he was not supposed to. The 20 year old had been hired to pace the leaders through 30km at January’s Xiamen (China) marathon and felt so good he kept going. This time he has done the work to make an impact in Toronto.

Canadian hopes rest on the 36 year old Eric Gillis who ran the race of his life to finish 10th at the Rio Olympic marathon just six weeks ago. Gillis has recovered well and with three Olympic Games to his credit has announced he will throw caution to the wind and go for a fast time in Toronto. Could Jerome Drayton’s 41 year old Canadian record of 2:10:09 finally be beaten?

Race Director Alan Brookes has done well to have both defending champions back. Shure Demise, 20, ran 2:23:37 a year ago and will be heavily favoured to win again. In January 2015 she ran an unofficial world ‘under 20’ record in Dubai ( 2:20:59), unofficial because the IAAF does not maintain junior records in the marathon. She will face the 2015 runner-up Fatuma Sado and also Tadelech Bekele providing a 1-2-3 punch for Ethiopia.

A Kenyan challenge will be mounted by 24 year old Rebeca Chesir who finished 2nd at the 2015 Scotiabank Ottawa Marathon. Her personal best of 2:25:22 came at the 2015 Dubai Marathon.

Once again Toronto Waterfront will serve as the Canadian Marathon Championship and the women’s field,  especially, is a competitive one.

Canadian Olympian Krista DuChene (2:28:32 personal best),  Rachel Hannah, the Pan Am Games bronze medalist, Tarah Korir of St Clement, Ontario  who ran a personal best of 2:35:46 in Ottawa,  Leslie Sexton (2:33:23) and debutante Dayna Pidhoresky all have their sights set on a berth on Canada’s 2017 IAAF World Championship team. It is very possible all three places could come from this race.

At this point Athletics Canada has not announced the qualifying time standards. The IAAF standards are 2:19:00 for men and 2:45:00 for women. The athletes know full well that the standards will be much much tougher and, no doubt, will request pacemakers to ensure they are nearer to 2:29 than to 2:39.