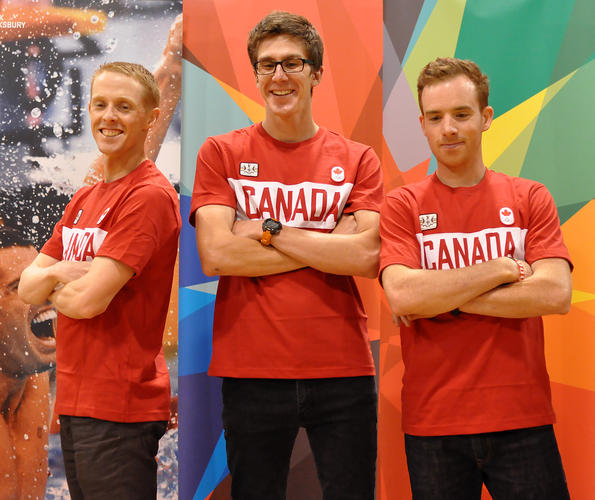 For the first time since 1996 Canada is sending three male marathon runners to the Olympic Games. Dylan Wykes, Reid Coolsaet and Eric Gillis will toe the line in the 2012 London Olympic Games marathon, Sunday, August 12th.

Dylan Wykes of Kingston, Ontario owns the fastest qualifying time of the three Canadians with his personal best of 2:10:47, which he ran in the 2012 Rotterdam Marathon. Wykes dropped out of an earlier marathon due to stomach issues and had decided that he was not going to pursue chasing the Canadian Olympic standard of 2:11:29. He changed his mind after talking to coach Richard Lee and chose to run Rotterdam on April 14th with just seven days remaining in the qualifying window.

Reid Coolsaet of Hamilton, Ontario qualified when he ran the 2011 Scotiabank Toronto Waterfront Marathon by running a personal best time of 2:10:55 in very windy conditions. Coolsaet also ran the Toronto marathon in 2010 finishing in 2:11:23.

Coolsaet’s training partner, Eric Gillis of Antigonish, Nova Scotia qualified shortly after Coolsaet in the same race, running just under the standard by one second in the time of 2:11:28. Gillis competed in the 2008 Beijing Olympic Games in the 10000m distance. His personal best in the 10000m is 28:07:19.

Coolsaet and Gillis’s coach Dave Scott-Thomas said, “they are feeling great, work-outs have been very good, we’re healthy and positive. We are exactly where we wanted to be at this point, so now we just have a little finesse work and it’s time to deliver”.

Coolsaet echoed the above comments saying, “I’m feeling good, workouts have been going well”, when asked about his training earlier this week.

The London Olympic course is said to be flat and fast yet has many turns. The flat and fast course may suit Wykes having qualified on the flat Rotterdam course. Scott-Thomas feels Coolsaet and Gillis are prepared, “ The marathon route is fine for Eric and Reid. We’ve modeled the course well, they’re vets, and we’re hungry to get on it” said Scott-Thomas.

The race starts at the iconic Mall location at 11:00 am (approximate) GMT, which is 6:00 am Eastern and 3:00 am Pacific. The race will be streamed live in Canada on CTV online as well as broadcast on NBC in America and CTV in Canada.