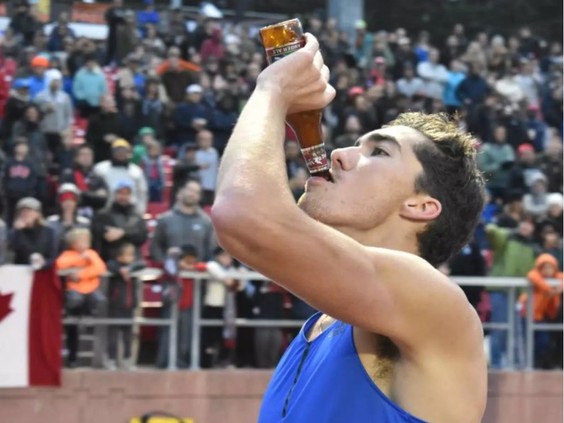 Corey Bellemore, the Canadian who improved the Beer Mile world record to 4:28 on the weekend, did no specific training for the event.

When asked about specific training for the beer mile he responded with, “specific training? None. But I have been working very hard with my run training and also, doing a great deal of strength training in the gym.”

In regards to a beer-drinking protocol, he said, “Just an occasional pint to catch up with a friend but no real practice, no.”

Can’t quite comprehend how @CoreyBellemore ran a 4:28 beer mile over the weekend, breaking his own world record.

Bellemore had run a 4:24.40 in 2018 in Vancouver, BC however, was disqualified because he left too much beer behind.

That beer mile world championship was won in the time of 4:50.70 by Dale Clutterbuck of the UK. This time the Beer Mile was run in Manchester, UK and the Canadian came up first, legally.

Bellemore ran 400m splits of 55, 60, 62, and 60 seconds, however, each of the first three laps is slightly short to accommodate the beer-drinking zone. Total time includes making the trek from one end of the nine-metre beer zone to the other whilst downing a beer. Typically, the fastest in the world can drink a certified Beer Mile beer in three to seven seconds.

Apparently, the beer sponsor was Flying Monkey Brewery and the brew of choice was their Amber Ale.

It was his third Beer Mile world title.

Bellemore may be competing in the Canadian Cross Country Championships on Nov. 27 in Ottawa, ON.

“I will possibly do Canadian nationals but I am more focused on a quality indoor season,” shared the Ontario native.

Asked what he did to peak for the event he added, “I did not peak for this event, just worried about getting as strong as possible to lead me into a big track season. I am taking my disappointments from the last two years to get fit, be smarter with training and enjoy a good life balance.”

Now being injury-free is something to raise a class to (for most people) or four complete beer for Bellemore.