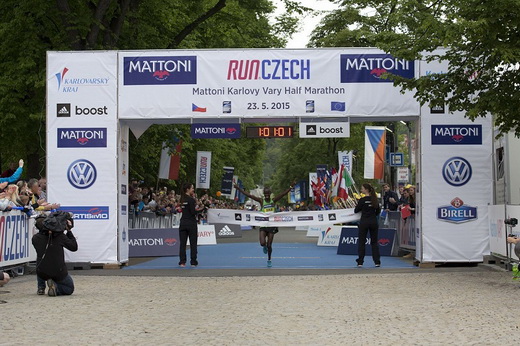 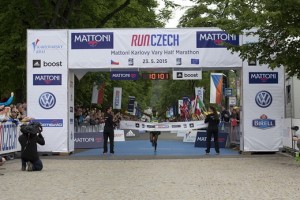 Elijah Tirop Serem led a Kenyan quartet to victory and took 20 seconds off the course record to win the men’s title at the Mattoni Karlovy Vary Half Marathon in the Czech Republic on Saturday. Serem broke away from the leading group with four kilometres left to achieve what he described as the best win of his career in 61:01. Nicholas Kipkemboi finished second in 61:13 and Bernard Bett third in 61:22. The Mattoni Karlovy Vary Half Marathon is an IAAF Silver Label Road Race.

The pace was strong from the start with the lead group going through 10km in 28:43 and on course to take almost a minute off the course record of 61:21, set last year by Ethiopia’s Teshome Mekonen. But the course was testing with frequent short climbs and a gentle breeze for the evening start in the historic Spa town gained in strength by mid-race. By 15 km four men were in contention: Serem and the joint fastest men on the start line, Nicholas Kipkemboi and Edwin Kiptoo plus Bernard Bett. Kiptoo was the first to falter and then Elijah Serem, growing in confidence, increased the pressure. “I thought then it was up to me. We were running to break the course record and I felt strong,” reflected Elijah Serem. Nicholas Kipkemboi finished 12 seconds adrift and Bernard Bett 21 seconds behind the winner.

Mulu Seboka won the women’s title, running 69:11 for a personal best and a course record by six seconds. The prolific marathoner from Ethiopia went clear at 13 km on an undulating course. Kenya’s Linah Cheruto finished second with a personal best of 70:22 while Bahrain’s Eunice Chumba placed third in 70:59.

Seboka’s improvement at half marathon was long overdue, chiefly because she has concentrated on the full distance in recent years. That paid off with 2:21:56 for sixth place in Dubai in January and she admitted her marathon strength gave her confidence.

The Ethiopian broke away from Linah Cheruto of Kenya and Bahrain’s Eunice Chumba at 13km, running strongly on the long road to the finish. The margin of victory was over a minute as Seboka finished in 69:11, well clear of Kenya’s Linah Cheruto who also set a personal best. Eunice Chumba finished third, almost two minut 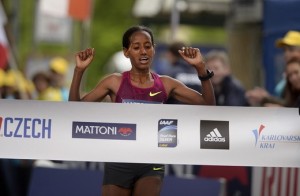 es behind the winner. Mulu Seboka will be back on the Czech roads for the Mattoni Olomouc Half Marathon on June 20 and is keen to press her claims for marathon selection for Ethiopa at the World Championships in Beijing.

The half marathon debut of Ireland’s Fionnuala Britton ended in eighth place in 73:46. Britton’s talent at the distance events has been amply proven by her two European Cross Country titles but on this exploration of new territory she was never a threat to the leaders.