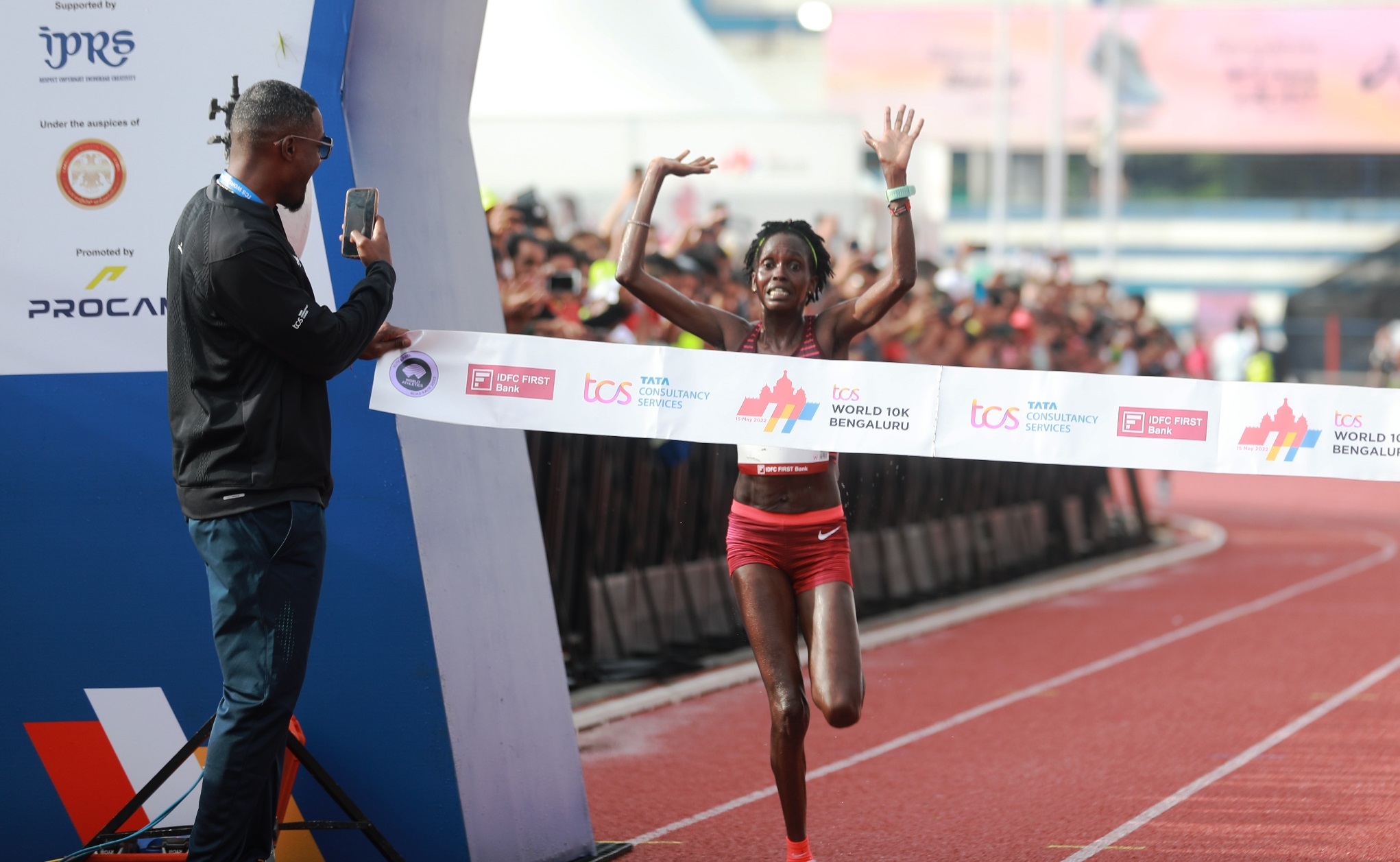 Kipkorir Kimeli, fourth in the Olympic Games 5000m last summer, took the lead in the Indian city with a kilometre to go and pulled away from Ethiopia’s reigning world U20 10,000m champion Tadese Worku to reduce the men’s course record by six seconds from the previous mark set by his compatriot Geoffrey Kamworor in 2014.

The race started off in an unusual manner with Kenya’s Reynold Kipkorir — who was to eventually finish ninth — out on his own for much of the first the first 5km, passing the halfway point in 14:00 with the rest of the elite field staying around 70 metres in arrears.

However, shortly after going through 5km, Worku changed gear and started to rapidly tow the leading men back to Kipkorir before going past him just before the 6km point and then increasing the pace further.

Kipkorir Kimeli continued running just behind Worku for the next three kilometres, letting his Ethiopian rival do all the hard work as the pair gradually got back onto course record pace as they also put daylight between themselves and the rest of the men’s field.
Worku was still looked fresh as they reached the final kilometre but could not respond when Kipkorir Kimeli took the lead, with the latter almost sprinting like a middle-distance runner over the final 300 metres as the finish line approached in Bengaluru’s Sree Kanteerava Stadium.

Kipkorir Kimeli crossed the line in 27:38 with Worku also inside the old record with 27:43 while the Kenyan pre-race favourite, and former world half-marathon record holder, Kibiwott Kandie made up three places in the final two kilometres and came through for third in 27:57.

By contrast, Ethiopia’s two-time reigning world 5000m Muktar Edris was never in contention for the podium and finished back in seventh.

But I really pushed hard towards the end,” reflected Kipkorir Kimeli.

The women’s race unfolded in a very different fashion to the men’s and Irene Cheptai took an even bigger slice out of the women’s course record which had stood to the late Agnes Tirop at 31:19 since 2018.

After a super-fast opening two kilometres of 3:02 and 3:04, a quick time was always likely and the race was soon down to just three women at the front: Cheptai, Obiri and fellow Kenyan Joyce Tele.

Tele started to lose contact with her compatriots in the fifth kilometre before Obriri, pushing the pace with Cheptai running in her slipstream, passed the halfway point in 15:15.

Obiri led the race for the next two kilometres, going through 6km in 18:23 and 7km in 21:32 before Cheptai took her turn to push at the front for a kilometre as Obiri briefly went through a bad patch.

However, Obiri soon recovered her poise and regained the lead just after embarking on the penultimate kilometre.

The Kenyan pair carried on their enthralling head-to-head battle but with just 250 metres to go, Cheptai darted past Obiri and was never headed before crossing the line in a personal best of 30:35, her first time inside 31 minutes.

Obiri eased off once she knew the race was lost but still came home in an outstanding 30:44, also inside Tirop’s former course record, while Tele was a distant third in 31:47 to complete an all-Kenyan podium.

“When we raced through an inclined patch on the route [just after 7km], I felt like Hellen’s pace reduced, that’s when I tried harder to take lead. But even when I entered the stadium for the final lap, I was fearing Hellen and kept pushing my speed to win,” commented Cheptai.

Kipkorir Kimeli and Cheptai both took home first place cheques of USD $26,000 for their victories and course record bonuses of USD $8000.