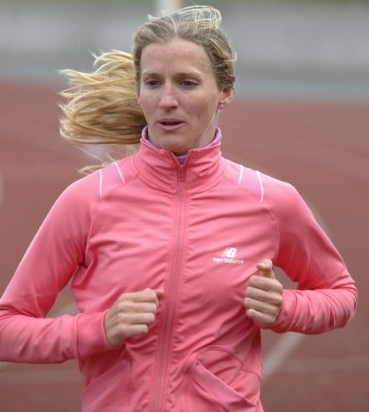 I first met Diane Cummins at the track, what are the odds? My son (then 9) and I were enjoying the Victoria International Track Classic at the University of Victoria, Centennial Stadium, May 25th, 2001.

It was a cool, breezy evening and Cummins had just handily run away from her competition in an 800m race, easing to a 2:04.

One of the best parts of the Vic International is heading onto the track and meeting world-class athletes immediately after the competition ends. When we got down onto the track, we caught up with Cummins first. We got her autograph.

Cummins, at the top of running in Canada, is getting ready for the Beijing Olympics; contesting the 800m and looking beyond however, I know she is focused on the big show. Here follows our interview.

CK: Beijing will not be your first international games or your first Olympics for that matter. You have been ranked near the top of the world, medalled in the Commonwealth Games and still hold the Canadian 800m record. Obviously one does not go into the Olympics, without some expectations. Athletics Canada wants a top-12 placing at least, is that good enough for you?

DC: No it’s not good enough! Of course, most athletes dream of the gold medal and that’s what gets us through the hard days. I dream of the medal, but I expect to at least perform where I have been before. My best international result has been 5th in Edmonton at the 2001 World’s. At the Olympics, it’s the same girls, different track.

CK: Looking forward to this spring and summer-specific training, are you doing anything different this time around to prepare yourself for Beijing?

DC: Having raced twice now, in extreme climates (and not performing up to scratch in those conditions) I am trying to figure out how to deal with the weather in Beijing. Not much has changed with my spring/summer specific training except my awareness of the potential to collapse again (in that heat). I am investigating what I need to do to feel good and race well. This is not just about a training camp somewhere hot, it’s more about the little things. What is the best hydration solution (I think I drink too many sugary drinks), how much do I drink before and after training. Figuring out the timing of liquids, foods, treatment and things like that.

CK: What are your plans after Beijing? Have you ever thought about longer distances, road racing or perhaps one day the marathon?

DC: After Beijing, I am going to South Africa to say “hi” to some old friends. Then I am going to train for longer distances so that in 2009 I can race 1500s and miles with less discomfort! Hopefully some road races, but I don’t think anything longer than 10km. I do have a hope of one day running the Comrades. …One day

CK: You are stateside for the time being, are you working with a coach based in Montana, or a Victoria, BC coach?

DC: I am working with Mark Timmons here in Missoula. Mark plans the training program and attends workouts. Brent Fougner, my coach from Victoria is my mentor and guides my overall plan. As most of you know Athletics Canada makes the season more complicated by putting up the famous ‘by this date’ selection criteria.

CK: I assume you are not running the high-quality workouts this early. What goes on in a typical day of a top-level athlete, training in Missoula Montana for the Olympics? Do you fit in longer training runs at this point?

DC: Yes, are you kidding? I love long runs! Not! But I do them. The best thing about Missoula is the training group. These girls are fantastic and there is never a lonely run. We are definitely not the kind that enjoys the solitude of this sport, getting a kick out of long solo efforts. We make the most of the social gatherings. Our long runs are every second Sunday, where I am up to 75 minutes. Track training happens Tuesday and Friday, Pilates, Monday and Thursday and all days in between are either two shorter runs or one longer run or cross-training, with every second Sunday off. I have now got my shorter runs from 20 minutes (when I was in Victoria) to 40 minutes. That’s a good feeling! On the whole, my mileage has increased since being here, but compared to others it’s nothing to write home about.

CK: We both celebrated our birthdays on the same day in January, you said you went to Phoenix and danced with some girlfriends and had a good time. I too danced with friends, but I didn’t go to Phoenix, I danced here at home, who do you think got in the better workout?

DC: Me for sure! You try to keep up with Vicky Pounds and Andrea Grove!

CK: Were you good at other sports as a kid? How young were you when you started running and competing?

DC: South Africa (when I was growing up) had a very unique, after school sports program, so I started really young. My mother says I was always running and my punishment as a kid was to time me running around the house …punishment…or so my parents thought hee hee. I have always loved running, so participated mostly in running sports like track, cross country, netball, field hockey. In my later years, I have enjoyed sailing, chess, and swimming.

CK: What are your thoughts on children running, training and competing?

DC: I think it should be fun and the kids should win because of talent not because of training and the pressures that go with it. I think it is important for children to belong to clubs and run, swim, bike, but in my opinion, it should be for fun also for exercise and for interaction, and not stressful.

CK: If a purse snatcher grabbed your purse and sprinted off, we know he would not get to the end of the block before you caught up to him. You could either run with him until he passes out from exhaustion or you can tackle him, what would be a Diane Cummins’ tactic in this situation?

DC: I would run and tackle him within seconds. I hope I have watched enough rugby in my day to know how to do it when I get there!

CK: You can take the girl out of South Africa, but you can’t take the South Africa out of the girl. You just placed very well in the Olympics, who knows top-12, top-5, podium, perhaps gold. Corporation X want’s to feature you in a commercial enjoying a very unhealthy food choice, what do you do now that you happen to be a known personality?

DC: There is no way I could do it, not for all the money in the world. My friends and parents know too well that I am pretty healthy. I have spent too much time trying to get them all to eat the same way. They would see straight through me.

CK: Getting back to your comment on Athletics Canada, making things complicated. There happens to be much dialogue on the internet about how Athletics Canada and to some degree Martin Goulet are causing a regression in performances, by making some qualification standards unreasonable. Do you have any thoughts to share on this?

DC: I know Athletics Canada (AC) have their reasons, which go beyond just AC staff – seeing as you mentioned, Martin Goulet. It is more complicated and political than AC just making it tougher for the athletes (and coaches). It’s the Canadian Olympic Committee (COC), the sponsors, the funding partners, and Sport Canada. AC needs medals to get money and support for our sport. We only get this if we perform within a certain percentile, based on the number of athletes competing. In track, this is very difficult as we know how competitive our sport is. For example, how many synchronized divers have to compete against 50 others in one competition?

And to bring up another controversial point: How do you know that the top-12 athletes in the world are clean? We all know that our sport is riddled with cheaters, so in my opinion, this ‘top 12’ criteria is not a fair part of the selection process. This also leads to the rising star category, which in my opinion is age discrimination. Especially when dealing with the longer distances. As an athlete, being the best in Canada and trying to be the best in the world at the same time, setting a good example for the next generation is not good enough. Winning a medal does not automatically qualify you as a good role model. The powers that be (those who make the criteria) need to stand up and publicly announce that participation is not the key, trying your best is not good enough, making the most of an opportunity is frivolous and if you are not going to win don’t bother going.

Bottom line: I don’t agree with the selection criteria. If the criteria were set like this in 2001, I would not have competed in the World Championships that year and never given the opportunity to make the final and come 5th.

Canada’s best result at the 2001 World Championships in Edmonton where she placed fifth.

Pan-Am Silver – Diane came to Canada from South Africa in 1994. She still holds 18 track and field records at her high school in South Africa. All of Canada will be cheering for Diane in Beijing and I will be right there with everyone.