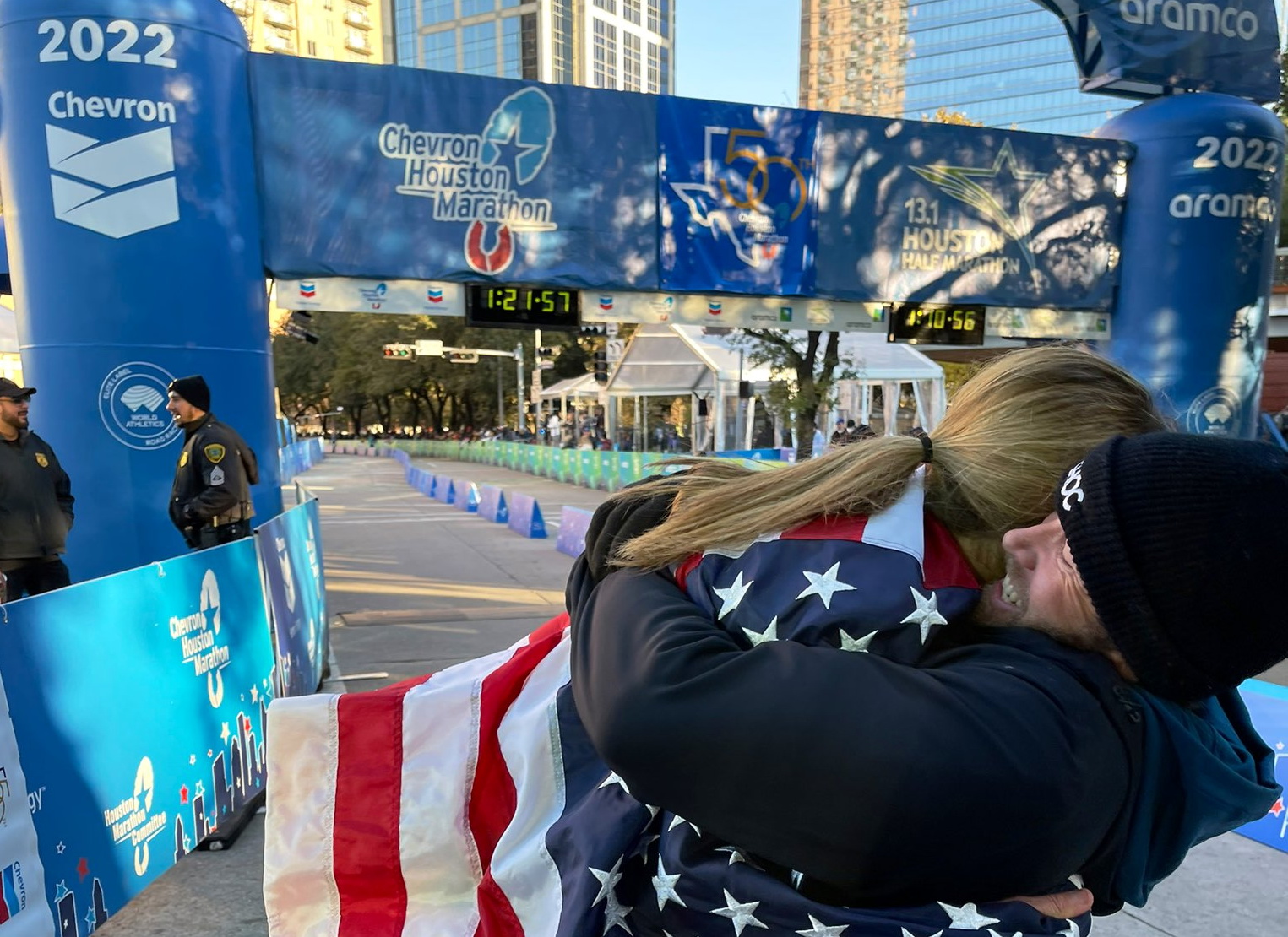 Several records fell at the 2022 Houston Marathon and Half Marathon Sunday in what is typically the first marathon event of the new year.

Keira D’Amato took down the American marathon record with her performance of 2:19:12, breaking Deena Kastor‘s 2:19:36, 2006 London Marathon performance. The 37-year-old mother of two previously had a best of 2:22:56 from the December 2020 Marathon Project that took place in Chandler, AZ.

“I keep checking to make sure that that’s what I ran. I just can’t believe it. I’m really tired but I’m really, really happy. I just feel like dreams come true,” said D’Amato, who continues to work as a real estate agent.

Finishing in second place was Alice Wright of Great Britain finishing in the time of 2:29:08, and the third-place finisher was Maggie Montoya of Boulder, CO clocking a the identical 2:29:08 finish time.

The first American, Frank Lara, finished in sixth place in the time of 2:11:32. Seven runners finished in 2:11.

Ngandu and company ran together for much of the course, then turned the final 12-15K into a race. Some had the wheels, some didn’t. The pace dropped to well below 5:00/mile for long stretches, that weeded out those who didn’t have a kick.

It was Ngandu’s debut at the distance. He ran the 2020 Houston Half Marathon in the time of 61:45, which is his personal best.

Rory Linkletter and Sara Hall take national records in the half

Canada’s half-marathon record that was held for a long time by Jeff Scheibler disappeared too as Rory Linkletter clocked a 23-second improvement with his 61:08 run on Sunday.

In 2020 Linkletter ran the Houston Half Marathon in the time of 61:44, which has been his personal best since.

Ten athletes finished within a span of 46 seconds of each other from 60:24 by Milkesa Tolosa of Ethiopia to American Scott Fauble in 61:11. Kenyan John Korir finished in second place, while Wilfred Kimitei of Great Britain – a former Kenyan took third. They finished in the time of 60:27 and 60:44, respectively.

Australia’s Patrick Tiernan clocked a big new personal best with his 60:55 an improvement from his 61:22 from the 2019 edition of the race.

What seems to be a pattern in Houston, Linkletter finished the final few kilometres with the fastest pace for him over the 21.1K course, which suggests that perhaps he could have run faster, yet.

Sara Hall took the national record in the half and finished second. She clocked a 67:15 performance. Hall bettered Molly Huddle’s record of 67:25 from the 2018 edition of the Houston Half Marathon.

Kenyan, Victory Chepngeno, won the race in the time of 65:03. Finishing third was Dominique Scott in 67:32.

For the 28-year-old Chepngeno, it was exactly a three-minute personal best over her performance at Monterey, CA in 2019 at 68:03.

Half Marathon American records set on the same course 15 years apart. Congrats to @SaraHall3 and @ryanhall3!

Everyone loves comebacks and underdawgs.

Seven months after D’Amato had her second child and nearly a decade after giving up the sport, back in 2017 she ran the Virginia Beach Shamrock Shuffle in her debut clocking a 3:14:54. She then clocked a 2:47:00 in the Richmond Marathon that same year.

Retired, married, mother of two – a working mom – in her mid-thirties started her comeback. On the way to the new national marathon record in Houston on Sunday, she had run a Covid-virtual 5000m time trial-cum-race in the time of 15:04. D’Amato also clocked an impressive 68:57 half-marathon in Michigan. Then there was her Chandler, AZ performance in a near-impromptu marathon organized by Josh Cox and her jaw-dropping 2:22:56 – an 11-minute personal best. The month prior, she broke the national 10-mile record in a women’s only competition with her 51:23 performance at the Up Dawg 10-miler race in Washington, BC.