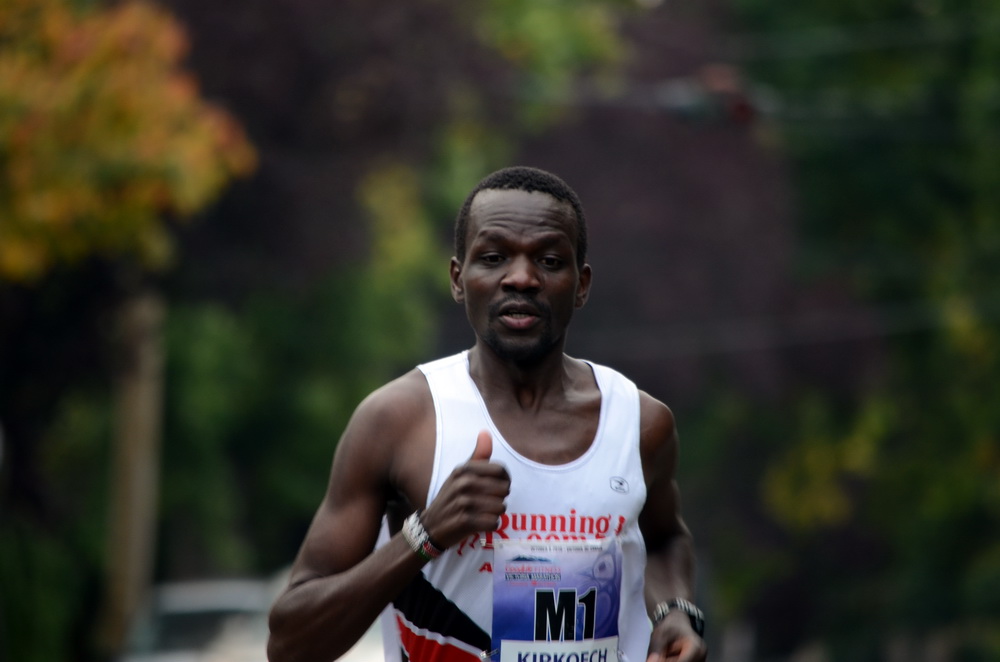 On Sunday, Oct. 7 on the streets of Victoria, the GoodLife Fitness Victoria Marathon offered up a few consecutive streaks and records for the offing.  Most of the athletes came away pleased with their results.

The 39th annual event included a half-marathon race as well as an 8K, all starting and finishing at the picturesque Inner Harbour. There were a total of 5,927 finishers for the three events, not including the Thrifty Foods 1K kids run.

Marathon – Half marathon and 8K story

During the 1990s, Kelvin Broad won the Royal Victoria Marathon five consecutive times. Originally from New Zealand and living in Calgary at the time, he also won the Calgary marathon eight consecutive times. Kenyan Daniel Kipkoech living in Lethbridge, AB tied the Victoria win streak Sunday. He finished in the time of two hours and 22-minutes and 39 seconds, which was 1:22 faster than second-place finisher Mizael Carrera of Albuquerque, NM (2:24:01) and 2:02 ahead of Ryan Smith of Boulder, CO (2:24:41).

Smith took in the Victoria race with several other Run Boulder Athletic Club teammates, a group that is headed by former international runner from Victoria Kathy Butler. It was an eight-minute personal best for Smith.

“I was looking for a sub-2:20, as my workouts have indicated that I can run that fast, but how can I complain about an eight-minute personal best,” shared Smith.

The marathon story of the day was back a few positions to finisher number five in Victoria’s Jim Finlayson. He broke the Canadian 45-plus age-group record with a finish time of 2:25:29. He improved the national record by a minute and the course record by two minutes. Finlayson, known for his Buddha-like demeanor and Zen-like-aura ran the race with precision, finishing the second half one-second faster than he ran the first half – a feat rarely accomplished.

Finlayson recently ran the Canadian half-marathon record for his age-group in Copenhagen where he finished in the time of 68:30. Asked if the Copenhagen race provided an indication that he could run a marathon in record time, he said, “No, I was already doing marathon specific training. I knew I could run a good time and it was just so nice to do it here at home where I know so many people.”

He heard his name called out throughout the entirety of the course.

Finlayson won the event in 2005 where he finished in the time of 2:24.13. He is a three-time IAAF World Cross Country Championships competitor and two-time national marathon champion.

“I would like to run the Rotterdam or Berlin Marathons next year. I think I can go about 2:23 on a course like that,” he added.

Cold Lake, AB’s Emily Setlack, a two-time second-place finisher at the TC10K came to Victoria looking to improve her marathon personal best which sat at 2:53:56 – not a time indicative of her ability. Although she was looking for a faster result, she did improve her best on her way to winning in the time of 2:46:20 and finished behind only 15 men.

“I am very happy to improve my time,” she said.

Her husband Matt Setlack ran the Chicago Marathon two hours earlier. Before Emily started she heard from BC Athletics’ Maurice Wilson that Matt had crossed 30K and was on pace for a personal best time of just under 2:30. She had no time to find out how he finished, as the Victoria race was about to start. He finished in the time of 2:38:00.

“I am so proud of him. It was the last race he could enter for a while as he will be in serious pilot training in the Airforce,” said Setlack. The couple are well known for their runs across Cold Lake in the winter, which have been documented in the media including Canadian Running Magazine. They will now move to Moose Jaw, Saskatchewan.

Edmonton’s Karissa Lepage debuted in the marathon and finished second to Setlack in the time of 2:48:46.

The first masters (40-plus) athlete was Suzy Slane of Abbotsford who finished in the time of 3:05:12.

SHOESTRINGS: Also in the marathon was 2013 winner Catrin Jones of Victoria, who specializes in the 50K event and mountain running. She has run in the 50K world championships on several occasions. She finished fourth in the time of 2:49:41 and 22nd overall. Also in the half-marathon race was defending marathon champion Lissa Zimmer. Inaki Gomez, one of Canada’s all-time great racewalkers, ran the marathon and finished in the time of 2:53:29. He finished 31st overall.