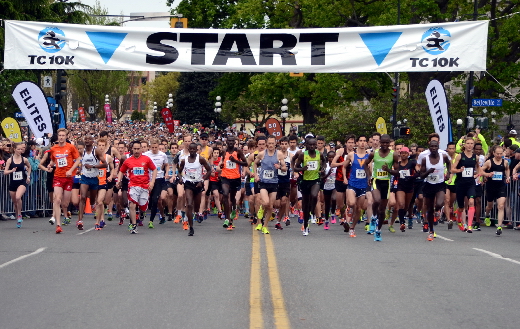 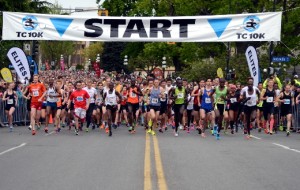 Over 7,000 competitors took in the 27th annual TC10K this morning under cloudy skies and cool, blustery conditions.

The pre-race chatter never strayed far from the subject of wind conditions on the water, or of the Virgin London Marathon that took place a few hours earlier, which was won in the time of 2:03:05 by Kenyan Eliud Kipchoge, the second fastest marathon in history behind countryman Dennis Kimetto, who ran 2:02:57 in Berlin in 2014. It was also a new London course record.

Kenyans also came to Victoria looking to break the TC10K course record of 28:47 set in 1995 by countryman Simon Chemwoyo, doable, but not during a blustery, cool Sunday, like today as Daniel Kipkoech won in the time of 29:42 and Jane Murage crossed the line in 33:45, 54 and 49 seconds off the records, respectively.

The men’s pack went out at 2:50 to 2:53 per-kilometre pace with Lamech Mokono leading seven other Kenyans including Leonard and Daniel Kipkoech (not related), Soloman Rotich, Christopher Cheruiyot, Willy Kimosop (who lives in Lethbridge, Alberta), Paul Kimugul and Bernard Ngeno.

Kimosop, Mokono and Ngeno, dropped off the pace after three kilometres, the latter two were racing through injuries, but stayed in the race. Mokono owns the current GoodLife Fitness Victoria Marathon course record of 2:13:42 from 2013. He was also saving himself from further injury as he will be pacing the Ottawa Marathon in May.

At the 5K split, the group was down to Leonard and Daniel Kipkoech, Rotich, Kimugul and Cheruiyot, who passed 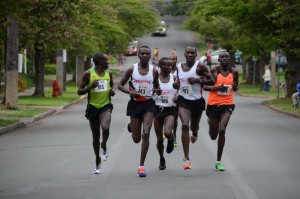 From kilometre seven to eight Cheruiyot led Daniel Kipkoech, who was drafting in the strong headwind. At the eight kilometre mark, where the course changes direction, Kipkoech pulled alongside Cheruiyot took a look at him, then dropped the pace to take the win.

Asked if he had said something to Cheruiyot, Kipkoech said, “No, I was listening to his breathing. I wanted to see how hard he was going and if I should take the lead.”

Meanwhile in the women’s race, American Lindsey Scherf from Pal Alto, California was back for her second straight TC10K to see if she can improve on her second place finish from last year. She finished fourth in the Vancouver Sun Run last week and recorded a time of 33:52, but the story of the day was about birthday girl and three-time winner Jane Murage of Kenya.

Murage had Happy Birthday sung to her while she was on stage accepting her first-place medal. She is the first to win four consecutive times. Victoria-based athletes Ulla Hansen (Marquette) and Lucy Smith have won several times each. Smith was in the race today competing as a master and won the over-40 category.

Murage told Athletics Illustrated, “I love coming to Victoria and racing and I love the TC10K, it is so well organized and it is so much fun.”

Murage will head back to Kenya after racing in the BMO Vancouver Half Marathon the following Sunday.

The second place finisher was Canadian Emily Setlack (Tallen), who is from Cold Lake, Alberta. She finished in a new personal best time of 33:47. Last week she had run 34:02 at the Vancouver Sun Run and felt that she could do more. Asked if she felt that the cool temperatures were an advantage coming from Cold Lake, she said, “Yes, I think so. I train all winter in adverse conditions, so I think that favoured me here today.”

Setlack was excited about her accomplishment because for the first time she raced without a watch. “I was nervous about doing it, but my coach Matt Clout suggested that I try racing without a watch in this one, so I tried it. I was excited and surprised to see the clock at the finish read under 34-minutes, I had no idea how fast I ran, until then.”

The top Canadian male was Shoayb Bascal, who runs for the University of Victoria; he finished seventh in 31:21. “I was looking for sub-31, but considering the conditions, I am pretty happy with that time,” said Bascal.

The top men’s master finisher was Victoria’s Jim Finlayson who crossed the line in the time of 32:07. Last week he ran an impressive 31:12 in Vancouver. Making no excuses he said, “It just wasn’t there.” However, the wind was likely a factor.

Campbell River native and former University of Victoria Vike Mark Cryderman was the second master finisher, crossing the line in the time of 33:22, while fellow former Vike Craig Odermatt finished in 33:43.

The two masters women to finish behind Smith were, Nancy Baxendale of Shawnigan Lake who finished in the time of 39:34 in the 50-54 category, while Alyson Fryer crossed the line in 42:16.

Meanwhile in other Canadian running news, Rob Watson of Vancouver was in London trying to achieve the Canadian Marathon standard for the Rio Olympics. He was hoping to run 2:12:50, however, didn’t have the race he was looking for and finished in the time of 2:18:45. His personal best is 2:13:29.