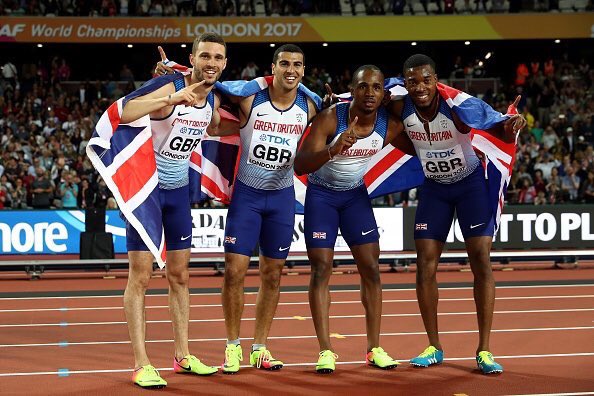 The sprinter who also won two European Bronze medals over his preferred 200m distance in 2012 and 2016 as well as European Under 23 Silver and Gold in 2013, has chosen to hang up his spikes having fought his way back from injury that has prevented him from competing in recent years.

Talbot who is 30, spoke of how he was determined to retire on his own terms, “Ironically, I am back healthy and fit now, but for me, it’s absolutely the right time to move on. It is nice to know it is my decision to finish and it has not been taken away or forced upon me. The last few years may not have been the best, but I can genuinely look back and be happy and say it’s been fun.”

“In February this year I was stuck in Texas during the massive snowstorm and I was in my apartment limping around with an injury and that was a really miserable time with me being injured for six to eight weeks. But it made me sure I would not finish in that way as I love the sport and did not want to part on bad terms.

I had the most enjoyable time throughout my career. I can’t be sad it’s over when I’m just so grateful it happened at all.

“Athletics has shaped me as a person, I have been able to travel the world and compete in major championships and I have so much fondness and positive memories from the sport, I’m nothing but grateful for what it has given me.”

Whilst London 2017 was understandably the pinnacle of his achievements and career highlight, he also has positive memories of other events including his first-ever GB & NI senior vest at the Glasgow Indoors in 2011, competing at the Rio Olympic Games where he narrowly missed out on a spot in the 200m final, and the progress made as part of the wider relay program:

“Thinking back, it was an amazing time from that relay at the World Championships in Beijing in 2015 where it all fell apart, building back up together, growing closer as a team and getting it right.

“I genuinely remember us knowing as far back as February in 2017 that we would win gold that year at London 2017. We felt so confident in each other and when we did win, I didn’t feel relief, just pure joy as that’s exactly what we knew we could do.

“Because of this, I’m determined to give back to the sport and it’s my aim to stay involved. I did my coaching qualification last year and I’m looking forward to seeing what direction I’ll go in.”

Of course in retirement there are benefits, Talbot admits to looking forward to certain freedoms that life as a full time athlete hasn’t previously afforded him:

“I gave up golf at 15 and I loved it, I’m looking forward to taking that up again and had my first lesson in 15 years not long ago. It’s nice to be able to do something relatively normal that you avoid as an athlete like playing 5-a-side with a group of mates!

“I also took a holiday at a ‘regular’ time of year this summer instead of out of season and can now see friends and family far more often which is harder when you live where you train. I’ve not regretted or begrudged the different lifestyle for one second but it’s nice now to live differently.”

In signing off Talbot wanted to thank all those who have supported him in his athletics since the start of his career:

“I’ve been fortunate to work with some great coaches but equally some really great people who have really shaped my life. From Dan Cossins who oversaw my early senior years, to Benke (Blomkvist) and Vince Anderson who have helped me so much.

“Stephen Maguire showed so much faith in me on the relay program and Christian Malcolm was a great mentor to me both as an athlete and when he was our team coach for the relay. Not to mention Jen Savage the sport psych who has been central to many of my successes. Also the late Neil Black who was my physio when I first broke into the team and then my performance director, just a really good man.

“I’ve had the benefit of some really experienced people who know how to balance competing, alongside all the other aspects of athletics. So I am really grateful for my agents Jane Cowmeadow and Caroline Feith, who has guided me so well. And it goes without saying I wouldn’t have managed any of it without my brilliant friends, family, and loved ones backing me at every step.

“The danger with listing people is you always miss someone, but I hope people realise how incredibly grateful I am for their support and input.”