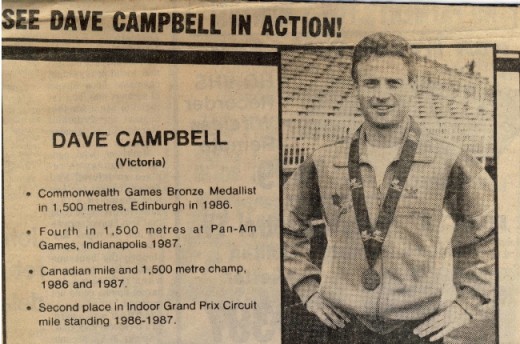 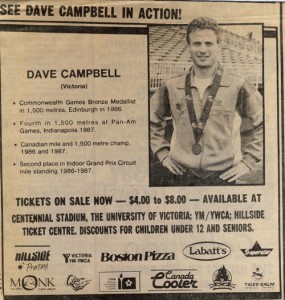 Dave Campbell of Victoria, BC by way of Halifax, Nova Scotia, was an international level middle-distance athlete during the 1980s and 1990s. He competed in the 1988 Seoul Olympic Games, as well as the1986 and 1990 Commonwealth Games in Auckland, New Zealand and Edinburgh, Scotland, respectively. He won a bronze medal in Edinburgh in the 1500m distance. Campbell also won the Vancouver Sun Run in 1990 setting his 10 kilometre best time of 28:54.

Campbell began running seriously in high school for the Mount Doug Rams in Victoria and followed that up by competing in the CIAU (CIS) at the University of Victoria. He also won the 1500m national title three consecutive years.

Christopher Kelsall: Were you an active child? Did you play a lot of sports growing up?

Dave Campbell: I was very active as a child, played soccer for eight years back in Halifax, Nova Scotia. My whole family had a sports background so it came naturally to me since I was introduced to lots of different sports growing up.

CK: At what age did you discover that running was your sport and decided to fully commit to it?

DC: I basically was introduced to running at a very young age of 10 I think, when I was living in Halifax. I moved out to Victoria at age 13 and didn’t really get back to running until my last year of high school. I was always approached by my PE teachers from junior high on because I finished first on all my runs in PE class. It wasn’t until grade 12 that my then first coach Stan Gill approached me to come out and train for cross-country and track. The rest as you say was history.

CK: So did you compete for the Mt. Doug Rams, followed by the University of Victoria Vikes?

DC: Yes I did, my first coach and one of the main reasons I ended up running was coach Stan Gill, a great high school coach. I then went onto the Victoria Mercuries for a year or two and was coached by George Dean and then I went to UVic.

CK: Did you have instant success in grade 12?

DC: As per most HS seasons, it starts with cross-country. During that season I was perennially a fourth-place dude, basically just building a base of training as a new runner per say. During track season I ended up second at BC HS in the 1500m so not bad and I ended up breaking the four-minute 1500m barrier as well. Not bad for year one, it gave me an idea that I actually may be good at this sport, ha-ha!!

CK: Any other runners in your family?

DC: Yes my sister was a national-calibre 800-metre runner. She actually made the 1980 Olympic team for the 4×400, you know the team that never went, but was named.

CK: Yes the boycott that must have been frustrating. Were you on that team? Or was that before your time?

DC: Way before my time, my debut was the 1988 Olympics and I actually competed, rib rib on her, ha-ha!!

CK: You won the bronze medal at the 1986 Edinburgh Commonwealth Games, took three consecutive national titles in the 1500m distance as well as finishing fourth to some big names like Jim Spivey for example at the Pan-Americans. Looking back on your career, did you accomplish everything your talent would allow, any regrets?

DC: Hmmm, that’s a tough one. I would have to say yes to that question. I was very fortunate to have had the opportunities I had with my career. I do believe I could’ve of run faster (don’t we all), but I don’t think I ever gave myself the opportunity to do that since I was an insane trainer.

I guess that would be one regret that I never let myself fully recover to get the most out of some of my performances. That being said, I did accomplish a lot and would always have liked to do better and always went into a race expecting to win, regardless of the caliber of field. As per the bronze at the Commonwealth Games, on paper I had the slowest time in the field, going in. One of my strengths was I was a fierce competitor, hated to lose which drove me in training.

CK: Can you give us an example of your “insane” training? What would a typical training week and month look like?

DC: Not sure how insane, but I could never really go for really easy runs in training so most of my runs were at a good pace. It was more so the intensity of my training that was the difference I guess. The boys always mentioned that I always ran a few metres in front of them. I could never just run beside someone, ha-ha!!  Back in the days, I would be doing two-a-days during the week and a long run on the Sunday and intervals of some sort on the Saturday. In the off-season usually would equate to 80 to 100 miles a week (129 to162 kpw). I would also throw in three weights sessions per week as well.

CK: Did you follow a particular method at the time? Was there a coach or an athlete that you tried to emulate?

DC: Good question. I owe a lot of my success to Ron Bowker; he really understood my personality and knew how to get the best out of me both in training and racing. I never really emulated anyone, just worked my butt off every day. My philosophy was if I wasn’t training or missed a run because I was tired or not motivated; my competition was probably out there getting better. As a racer, I really respected Steve Scott. He was always willing to race anyone at any time, unlike the Europeans who always picked and chose races depending on who was entered.

CK: Like Steve Ovett for example? Did you ever get to race him?

DC: Yes, I competed against him once at the Bermuda Road Mile where I finished first. That was in 1990, just before I went to the Commonwealth Games.

CK: Can you take us through the final at the 1986 Commonwealth Games?

DC: The day was dark and dreary, kidding. Since the heats were the day before, I found myself a little tired and had a bit of a cold. The day of the race and what you don’t see in the video is it was pouring rain and about 50kph winds. My goal was to stick as close to Steve Cram as possible since I was fairly sure he was the one to beat. All went to plan except one small detail; I’m not as fast as him, ha-ha!! What it did do was conserve my energy until the last lap when all the rest of the field was fading and there you go the bronze was mine.

It was totally unexpected as per my reaction at the finish. My motto was and always was: anything can happen on any given day, no matter what the difference in level may be. So always go into a race intending to win.

CK: Did you get your 15 minutes of fame on CBC?

DC: Hmm, I don’t think so. But I consider my whole running career my 15 minutes of fame. I was very fortunate to compete at a high level for over 10 years where I was given the privilege to travel the world for free and meet some very interesting people.

CK: You apparently competed in John Walker’s final international race, which happened in New Zealand. Can you talk about the mishap that took place there?

DC: Hmmm, since it was not during our season and although I was in great shape running back-to-back races (heats and finals), I just wasn’t prepared as well as in the middle of a track season. Both Johnny (Walker) and I found ourselves in the back, him the old warrior and on his way to retirement and me just trying to hang on. He got tangled up with an Australian runner, can’t remember the name and I was forced to jump over him, all of which didn’t lead to a great result, considering how I felt in the heats. Consolation is, I came back to Vancouver to win the Sun Run a couple of months later, which again was a shock since I wasn’t a 10k runner.

CK: Regarding John Walker, did he not run his first sub-four-minute mile in Victoria

CK: Paul McCloy gets plenty of notoriety because of his string of six consecutive national cross-country titles, but you had some epic battles with him. Did he try to run you into a parked van once?

DC: (Laughing) now that’s funny, where you getting your information from, Trish (Fougner)? Paul and I had lots of rivalries in the 1500 and the mile, he is one tough cookie. It was the Victoria road mile (down the middle of Douglas Street moments before the annual May holiday parade) and the last quarter mile is downhill, once you get him going downhill there is no stopping him. To clarify, it was actually me who was leading him into the back of the van, ha-ha!!  But that tactic didn’t work, he won!!

CK: Did he not stop to move around you near the finish?

CK: Who had better form?

DC: You kill me…in form do you mean who was in the best shape or who looked prettier ha-ha!!  For both, I would have to say ME!

CK: Apparently he ran like a spider – limbs everywhere, but he still won those six consecutive national cross titles. The Victoria Track Classic is having its 25th anniversary this year. Do you have fond memories of racing that meet?

DC: Wow that whole era and the evolution of Centennial stadium from a rubberised asphalt track to the track surface you have now. I actually thought that the track classic started before 1988 and was run on that old surface as well, but I could be wrong. Back to the question, during the late 80’s we had such a cohesive group of athletes both male and female, we were like one big dysfunctional family (ask Trish Fougner re: spaghetti).

It was always nice to have that one hometown meet where we could compete in front of our home fans. It was great for all of us to be able to compete against some of the best athletes in the world when otherwise you might not have the opportunity and in front of the people who support you and follow you throughout the years, it was pretty special. The best was noticing how much of an effect you had on the kids that you didn’t even know who followed you and help build momentum for them to get excited about running. Those Victoria Track Classics were good times!!

CK: Apparently there is no irrefutable proof that Trish Fougner put spaghetti into your bed at the hotel. So the 80s, eh, who grew the best mullet?

Trish Fougner: As far as tossing spaghetti into Dave’s bed, he said he liked pasta, so the girls’ decided as a team that he should have some before he went to sleep. I was just the messenger!

DC: I see. Best mullet? That’s gotta be Keith Butler, he was always the crazy one.

DC: Keith through our university days was our alternative dude, the quiet one with a wild side, ha-ha!!

CK: Do you enjoy running for leisure these days?

DC: Yes I do run a little bit, very sporadic but I at least get out once or twice a week.