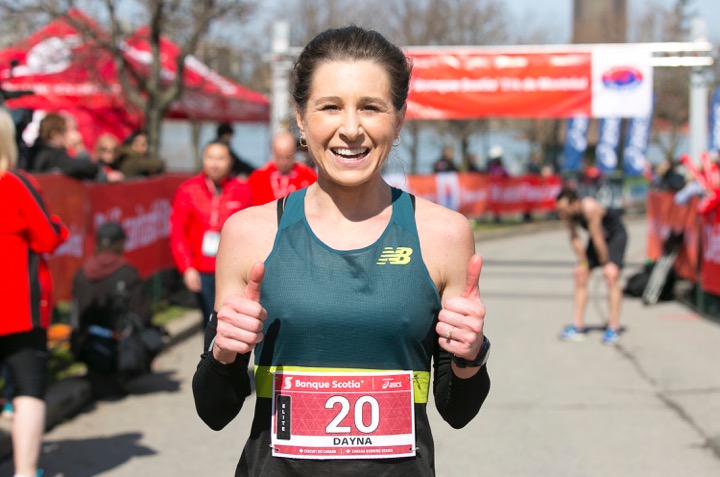 “I want to win for sure,” the 31-year-old Vancouver resident says of her goals. “Time-wise it depends on the day. If I am feeling really good then maybe I can really push it a little bit more. I think the main thing is to get some Canada Running Series (CRS) points and try to win.

“Last year I ran really slow there because I was in my marathon recovery phase, so I am in need of a little bit of redemption. I am familiar with the course now and I know the second half can be harder coming off a pretty long downhill section. I think Natasha (Wodak) is doing it so it will be good if she ends up racing – I am ready to put up a fight.”

She laughs at her last comment knowing that Wodak registered a fine 5th place finish at the 2018 Commonwealth Games and remains the Canadian 10,000m record holder at 31:41.59.

At the same time Pidhoresky has enjoyed an impressive start to the 2018 season. In March she won the Around The Bay 30k Road Race in Hamilton, scored a personal best 10k when she finished 5th in the Vancouver Sun Run and then claimed the silver medal at the Canadian Half Marathon Championships in Calgary. Toronto’s Sasha Gollish was the victor that day.

“So far I have been very consistent,” Pidhoresky declares. “I haven’t had that special race that I have been wanting where everything kind of shines, but I have put in a lot of solid races. The main thing is I have been healthy – no injuries at all for going on two years.”

During the 2016 Scotiabank Toronto Waterfront Marathon she suffered a painful sacral fracture that crushed her physically and emotionally. Yet she battled back seven months later to run a personal best marathon of 2:36:08 in Ottawa. That performance has led to selection for the Canadian team at the 2017 World Championships marathon in London, and suggestions that she is destined to follow Lanni Marchant and Krista DuChene into the ranks of top international class marathoning.

Kangogo was 4th in the half marathon at the Vancouver Marathon festival in early May, then three weeks later, finished 2nd at the Canadian Half Marathon Championships in Calgary. Despite his advanced years – he will be 39 next month – the Kenyan born Canadian citizen never fails to turn up ready to do battle, and perhaps feels he owns this race.

Watson ran 2:13:29 at the 2013 Scotiabank Toronto Waterfront Marathon and once claimed to have retired. Yet his ‘fun running’ has left him in fairly good condition. Despite extensive coaching duties with the Mile2Marathon group, he has returned to serious training to win the Vancouver Marathon last month. He also finished 5th in the Vancouver Sun Run in a very good 30:01. On such evidence this certainly promises to be a competitive race.

The picturesque course starts on the grounds of the University of British Columbia and traces the Pacific Ocean shoreline through Point Grey and Kitsilano to Stanley Park. With turns, some hills and the challenging climb over Burrard Bridge at 18km the event records are quite extraordinary. Lioudmila Kortchaguina set the women’s record of 70:50 in 2003 while Kenya’s Patrick Nthwia ran 63:10 in 2007 to establish the men’s standard.

The top Canadian man and woman will each receive $1,500 as well as 45 CRS points which count toward the overall title and the accompanying $3,000 awarded to title winners.