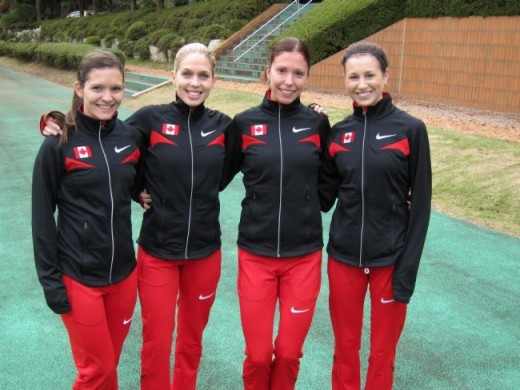 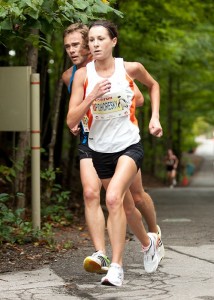 Dayna Pidhoresky of Tecumseh, Ontario is now living in Vancouver and training with The BC Endurance Project (BCEP), headed by Richard Lee. She is seeking to regain former fitness levels and to run some personal bests, which would put her in heady Canadian company as she arrived armed with a good resume.

Pidhoresky is one of Canada’s top distance runners having completed the half-marathon in the time of one hour and 11 minutes and 46 seconds. She won the 2011 edition of the historic Around the Bay 30k race that takes place in Hamilton, Ontario, finishing in 1:50:46; she split 20 kilometres in that race in just over 1:12. She also owns a 10 kilometre personal best time of 33:02. Each of her long-distance personal best times were accomplished during 2011.

Pidhoresky looks to improve on her current bests in the spring and fall of 2014, “This spring we are doing more of a 10 kilometre focus, but I will be racing a few half-marathons as well. The primary goal is to achieve consistency in training before we look too far into the future. That being said, I would love to get a new 10K personal best this spring and many more pbs in the fall!” said Pidhoresky when asked about her upcoming goals.

Consistency has been an issue over the previous two years for Pidhoresky, as she has experienced recent shin, foot and knee injuries, which caused her to spend time cross-training or running lower mileage volumes. Feeling as though she was living in a bit of a rut, the former Windsor Lancer spent the summer of 2013 in Kelowna, BC re-introducing herself to consistent mileage. With injuries mostly behind her and having got a taste of more of a professional running lifestyle in Kelowna, as well as having her fitness begin to return, she made the move to Vancouver.

Although her fitness is not back to her better standards, she has joined in group workouts with BCEP and looks to find her fitness in the spring. In regards to working out with Natasha Wodak and Sabrina Wilkie, she told Athletics Illustrated, “I would love to be able to keep up with these fast girls! I am not the fittest at the moment and Natasha and Sabrina have been killing me lately in workouts, so I would hope to be able to hang with them by the end of the spring – at least to avoid getting lost in Stanley Park.”

“As far as racing goals go I really want to be able to race with the best of them and hold my own again. Canadian women’s running has skyrocketed in the last few years and I want to be a part of it!” said the 27-year-old. “This spring I will be looking towards the Vancouver Sun Run (10k), Ottawa 10K, and Scotiabank Vancouver Half Marathon. I am also starting my season with the First Half Half Marathon (in Vancouver – in February), and Vancouver Spring Run-Off (in March).”

If any coach in Canada can help Pidhoresky achieve her goals, Lee certainly has the experience. He coached his wife Sue Lee to compete in the 1988 Seoul Olympics 10,000 metres. She finished 30 seconds from a bronze medal and finished in 31:50.51. Amongst many other athletes he has experienced success with, he currently coaches Canada’s fastest marathon runner in Dylan Wykes. Wykes ran the 2012 Rotterdam Marathon in 2:10:47, which is the second fastest time in Canadian history. He ran Rotterdam only at the urging of Lee after having had a rough experience during the 2012 Tokyo Marathon, weeks before. The Rotterdam race qualified him for the 2012 London Olympic Games.

Likewise, Pidhoresky looks to represent Canada and she also would like to compete in the marathon. Based on her half-marathon best time, with the requisite training in place, she could in theory, run a marathon under 2:30. Currently the Canadian record is 2:28:00. Lanni Marchant set the record at the Toronto Scotiabank Waterfront Marathon in October 2013. Pidhoresky has renewed motivation. In a recent blog post, she wrote, “So as 2014 is now upon us I am eager to chase down some new running pbs.  I am greatly enjoying training with the group and I am proud to be a part of BCEP!  It is extremely motivating being surrounded by these talented folks who have the same passion and drive to work hard!”