Victoria’s Debbie Scott (Bowker), competed at an international level for Canada in a career that spanned over 20 years. In total, she won 26 Canadian titles, set Canadian records over a range of five distances. She competed in three Olympic Games, four Commonwealth Games, one Panamerican Games, and two IAAF World Track and Field Championships.

She won the famous New York Mile in 1982, medalled in the 1986 Edinburgh Commonwealth Games winning silver in both the 1500m and 3000m distances. She also won a medal in the Pan Am Games and finished top-10 at the 1984 Los Angeles Olympic Games in the 1500m event.

In cross-country, she had a top-eight (1981) and two top-13 finishes at the IAAF World Cross Country Championships. 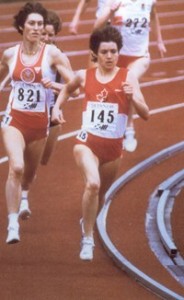 istopher Kelsall: How did you find running? At what age did you decide that this is the sport you’re going to compete seriously in?

Debbie Scott: My first experience with running was in grade seven, elementary school when I joined a 50-mile club. I very much enjoyed the act of running and although I did not really carry on with the sport of running until my high school years, I certainly developed an intrinsic love of the activity. In high school, I was a multi-sport athlete and participated in field hockey and volleyball. Consequently, I signed up for the athletic PE block, where you could train for your sport in class. In that class, we did a significant amount of fitness and through the running activities, I was identified and recruited for the cross-country team.

A pivotal point in my life, was one day, when my teacher, and eventually my coach, Mr. Peter Simmonds pulled me aside to tell me that I was a very talented runner and with my inherent work ethic I could go a long way in the sport of running….even the Olympics!! Although I had the thought that he must really want me to run for the cross-country team, I could not stop thinking about what he had told me and it definitely piqued my interest. Faced with the choice of a field hockey game and a cross-country meet on the same day, I chose cross-country and never looked back.

CK: Would you suggest that cross-country is a vital part of a road or track career, for aspiring runners?

DS: Absolutely, young athletes definitely benefit from the strength gained in cross-country and road racing. This is of great value both mentally and physically, while improving technique running over rough terrain, learning to maintain rhythm when it is interrupted and when you are fatigued are essential skills an athlete needs to work on and master in preparation for a successful track season.

CK: What would be your favourite memory from the big events, for example, the New York Mile win in 1982, finishing top ten in the 1984 LA Olympics or one of the four Commonwealth Games?

DS: Highlights for me, were 8th, 11th and 13th in the world cross-country races, a phenomenal event where about 150 of the best runners in the world race head to head off one start line. Also, silver medals at the Commonwealth Games and of course winning the New York Mile. But what inspired me the most in my running career was the challenge of running faster than I had ever run before…and achieving personal best times.

CK: Do you find joy in recreational running these days?

DS: I still love running and although it looks nothing like my the past life as an athlete, at 54 I am so lucky that I can put on my running shoes and still run an easy hour. It takes some juggling to get a run in sometimes – while raising 4 kids with my partner, working full-time as a teacher, looking after a small farm and working with our three horses. I am fortunate after so many years of hard training that I am able to run without any nagging aches and pains.

One of the things I did right, in my career, which is why I had a 20-year running career, was to allow myself time off running for injuries to heal. My career was not ended by an overuse injury. Alternate forms of training such as running in the water, cycling and weight training kept me fit while injured…but there was always a tough time getting my running rhythm back coming out of an injury.

CK: You ran for the University of Victoria Vikes on a very competitive team. There was great camaraderie amongst the athletes, yes?

DS: Yes, absolutely!! There was an amazing core of athletes who competed hard for the university while aspiring to achieve national and international goals. From, our coach, Ron Bowker whose passion, enthusiasm, knowledge and ability to tailor programs to meet individual and group needs set the stage for success. He worked with any athlete, regardless of ability, as long as they had an interest in challenging themselves to run faster. In his coaching style, he always brought a positive and educational perspective when evaluating performances and never put an athlete down. The camaraderie was also a major factor in the program as well. Being able to train in an environment where you were pushed by your training partners, who were your friends, in a respectful and healthy atmosphere, was key in pushing the level of performances to higher and higher achievements. Finally, the facilities, availability of great trails and roads to train on along with weather that was conducive to all year outdoor training was critical.

CK: The Victoria Track Classic is celebrating its 25th anniversary this year. Do you have good memories from competing in front of the hometown crowd?

DS:  The Victoria Track Classic was one of the great events hosted in Victoria that came out of an era, where, centres were being set up to create optimal training environments to enable and support athletes to achieve high-level goals in international competitions. And yes, it was great to have the opportunity to race at home. The exposure of our sport, at a high level, to the community and especially our elementary school students and young athletes definitely promoted a keen interest in our sport. It brought focus to the athletes who made Victoria their home because of the opportunities the facilities, weather and exceptional coaching staff provided.