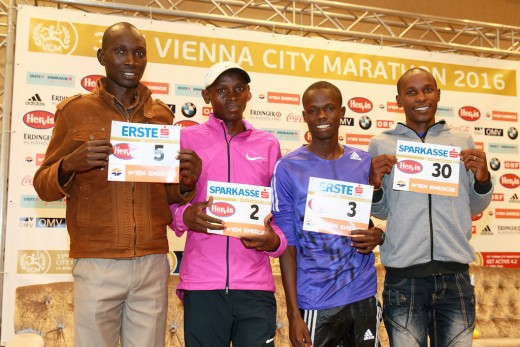 Theatre of Emotions – this is the motto of this year’s Vienna City Marathon and additionally it is the title of a remarkable book on marathon running which was published by the organizers. On stage today during the pre-race press cDebutant David Kogei could be in for some drama at the Vienna City Marathononference in Vienna were some of the elite men’s runners. While Kenya’s Levy Matebo Omari features the fastest time on the start list with a personal best of 2:05:16 there could well be an upset in Sunday’s race. Fellow-Kenyan David Kogei heads a list of four debutants who might be in for a surprise. Adding other running events staged parallel to the Vienna City Marathon on Sunday organizers have registered more than 42,000 runners for the 33rd edition of the event, which is an IAAF Gold Label Road Race. The marathon will be shown live and worldwide on the internet at: www.vienna-marathon.com

Seven runners are on the final start list with personal bests of sub 2:10. Levy Omari is the one who has the fastest PB in this group with some distance. However it is already four and a half years ago, when he ran 2:05:16. He was second in Frankfurt in 2011. „From 2012 onwards I suffered of some stomach problems during training and when competing,“ explained Levy Omari why he was not able to run a similar world-class time again after Frankfurt. „I am well prepared now and I hope there will be no problems on Sunday. If the weather will be good then I want to run 2:06 which would be a good start for this year.“

It is a training partner of Levy Omari who is the second fastest on the start list: Robert Chemosin ran 2:08:05 in his debut marathon a year ago in Warsaw. „It was raining there, so in better conditions I hope to run faster. I have trained well,“ he said. Fellow-Kenyan Suleiman Simotwo also hopes to improve his personal record. He was fifth in Vienna a year ago and then improved to 2:08:49 in Frankfurt. „Last time in Vienna I had some stomach problems in the final part of the race. I know that the Vienna City Marathon is a very nice race and I hope to further improve here,“ said Suleiman Simotwo. „It might help that one of my training partners, Raymond Choge, is in the race as well.“

Kenya’s Raymond Choge is one of four debutants in the race who are expected to run in the first group. While he has not run a half marathon yet his fellow-Kenyans David Kogei (59:46) and Francis Lagat (61:28) have. Ethiopia’s Merkebu Birke has a half marathon PB of 60:41. „Sunday will be a big day for me. If I run my debut in a time of sub 2:10 I will be happy,“ said David Kogei, who has run as a pacemaker in Vienna a year ago. „I know quite a bit of the course, which could be helpful.“ Kogei was also the main pacemaker in the Berlin Marathon last year, when he assisted Eliud Kipchoge for 29 k. Kipchoge went on to win the race with a world lead of 2:04:00. „This was a good step towards my marathon debut.“

There are no indications that the course record of 2:05:41 could be attacked on Sunday. Instead organizers hope for a close and thrilling race for victory. There could be some drama in the Vienna City Marathon. Fittingly the event has a new finish right next to the Burgtheater of Austria’s impressive capital. There will definitely be another act of Theatre of Emotions on show on Sunday.