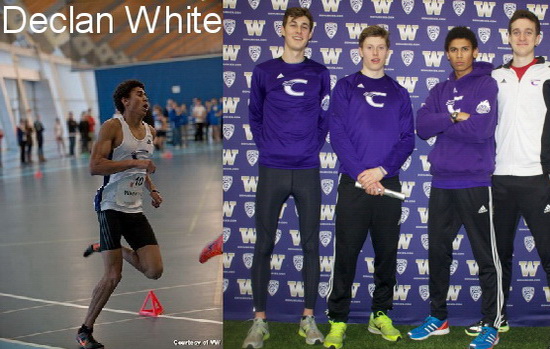 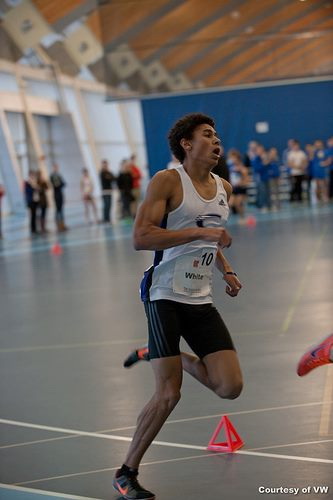 Twenty-year-old middle-distance specialist, Declan White of South Surrey, British Columbia has committed to competing for Trinity Western University for the start of the 2013 and 2014 school year. He is competitive in the range of distances from 400m to the 3000m as well as cross-country.

On February 2nd he competed in the Jerome Indoor Classic 1500m event, finishing a respectable third behind the seasoned Geoff Martinson and Chris Winter in the time of 3:55.73. White will be competing at the Millrose Games later this month in the 4 x 800m, then plans to begin training in earnest for his first year of University.

Christopher Kelsall: Trinity Western University appears to be an obvious choice for you at first glance. The school is local, provides great coaching and the class sizes are smaller, but at the end of the day, what was the deciding factor in you choosing TWU?

Declan White: Apart from the reasons you listed above, a large factor was that I wanted to stay in Canada and add to the C.I.S. another competitive runner. Sure I could have taken a full ride down in the states but that’s not what I wanted. I want to build the running community here in B.C. and help it grow to become better. We already have some of the best runners in North America emerging from the Fraser Valley (South-West British Columbia); we should be keeping our talent in Canada. I believe at TWU we can build a competitive alternative for student athletes wishing to build their career and sport in Canada.

CK: A refreshing position to take. Tyler Smith near Edmonton, who will be competing for the University of Victoria Vikes next year hinted at that reason too. Where does this home loyalty come from? Is this a new trend?

DW: Yes Tyler and I are friends, and we do share the same thoughts on competing in and for Canada. I would have to say that it comes from the way we have grown with our sport. I was born in Northampton, England and lived there for 11 years before my mother and father decided to move to Canada. I was opposed to moving at first because I have a large Jamaican/Irish family background and to move so far seemed like a bad idea. And even though family bonds have slimmed I have created many new bonds with the running community in B.C. Running has brought so many great people into my life that have formed me as a young man and I am extremely grateful. So I believe the home loyalty comes from me wanting to keep and expand my family.

CK: I was going to ask having the name Declan, if there is Irish in your family. So is it your mother who is Irish?

DW: My father’s side is Irish. My father was born and raised in Northampton though.

CK: Did you compete in other sports growing up?

DW: [laughing] Yes, I played rugby in my high school years, grades eight through 10, but was too small to make a difference really. Also I did cross-country and track and field on and off for years, but never really trained for the sport.

CK: Are you a fan of rugby, do you watch rugby sevens tourneys?

DW: Yes I do enjoy watching a game or two of rugby. I suppose it just runs in my father’s side of the family.

CK: Small guys can play fly-half! What position did you play?

DW: Unfortunately I had poor ball-handling skills (laughing), so I usually played blind side wing, since I was a decent tackler.

CK: You display a range in your running talent from 400m to cross-country and you have done well at 3000m. Which distance do you hope to specialise in?

CK: Coastal Track Club is fairly new isn’t it? What caused you to join them?

DW: Actually my coach Scott Kent created Coastal Track Club in the spring of 2011 and it thrived since then, producing some very talented athletes such as Justin Kent, Adam Paul-Morris and Tim Delcourt. We train at the South Surrey Athletic Park just beside Semiahmoo Secondary.

CK: Don’t forget also a young man by the name of Declan White. In regards to increased mileage, how do you respond to the increases? And do you enjoy running enough to increase the mileage to typical elite levels?

DW: During the months where I increased my mileage (Aug. 2012 – Dec. 2012) it felt quite difficult at first, but the more I increased the easier it seemed to get. I definitely think I do (laughing) this year I am really going to test my body to see how much training I can get in before outdoor season. Although I haven’t started to up my mileage yet because I will be competing in the Millrose Games in the 4 X 800m.  After this event on February 16th I will begin to increase my mileage again.

CK: You graduated from Semiahmoo Secondary in 2010. Have you taken the opportunity to use the time from then until now to build good volume in your training?

DW: Yes definitely, I only started training with Scott Kent about December 2009 and I worked hard to compete well in British Columbia High School (BCHS). The 2010 cross season was difficult since I wasn’t used to the amount of mileage. Fortunately it paid off in the outdoor season of 2011 where I qualified for Junior Nationals and ran with Team BC. I Continued my success faring well compared to previous years in cross 2011 where I participated on the provincial team winning a team gold.

DW: The first half of 2012 didn’t go as planned for me; I believe I was too low on mileage to sustain a good track season only finished off with minimal personal bests. So in August I really trained hard keeping my mileage well above 100 km a week which prepared me to tackle cross and I was happy with my performance at senior nationals 32:11 10km 34th. I continued to train hard over the winter break from 2012 to 2013 keeping my mileage high and so far it has paid off greatly this indoor season. I’ve ran a fantastic personal record of 8:23 in my 3000m which definitely helped in trinity western choosing me as a prime candidate for their school.

CK: You raced the Jerome indoor meet in Vancouver on the weekend and finished third behind Chris Winter and Geoff Martinson. How does the time of 3:55.73 and position of third sit with you?

DW: To be honest I was a little displeased with myself, I let them get away from me. At 800m in thinking I could close the gap, but gave them far too much room. I’m lucky my team-mate Justin Kent came by me to give me motivation and focus. Also that track is quite a pain to run on, I find the surface doesn’t have as much of a give as a 400m track would.

CK: You are aware that Martinson has run 3:37 and Winter is a pretty solid athlete himself, yes?

DW: Yes they are both athletes that I respect and look up to; 3:37 is a time that I want to achieve in the future. Although I thought Martinson would have run faster in the race.

CK: Earlier you mentioned that the Coastal Track Club will be racing the Millrose Games? What distance are you competing in?

DW: Yes I’m very excited that we put together a 4 X 800m team to compete in Millrose Games February 16th. We’re running as “Team Zoom” sponsored by Nike, the first Team Zoom since 1986.

DW: That will definitely be a tough time to beat this early in the season off 3000m training (laughing). But Adam Paul-Morris has already run 1:18.86 for a 600m and Alex Kilpatrick should be able to post a sub-1:53 performance. I also know that Justin Kent and I are in very close shape so expect sub-1:54 legs for us. Shaping up to be a very competitive 4 X 800m.

DW: If I run another 3000m I will be looking at 8:05. For 1500m I believe I can just squeeze below 3:45 this year. The 800m is going to be 1:50 for sure. I know these are quite high expectations but I am feeling great so far this year and I know that I’m going to train harder than I have ever trained these next few months in preparation.