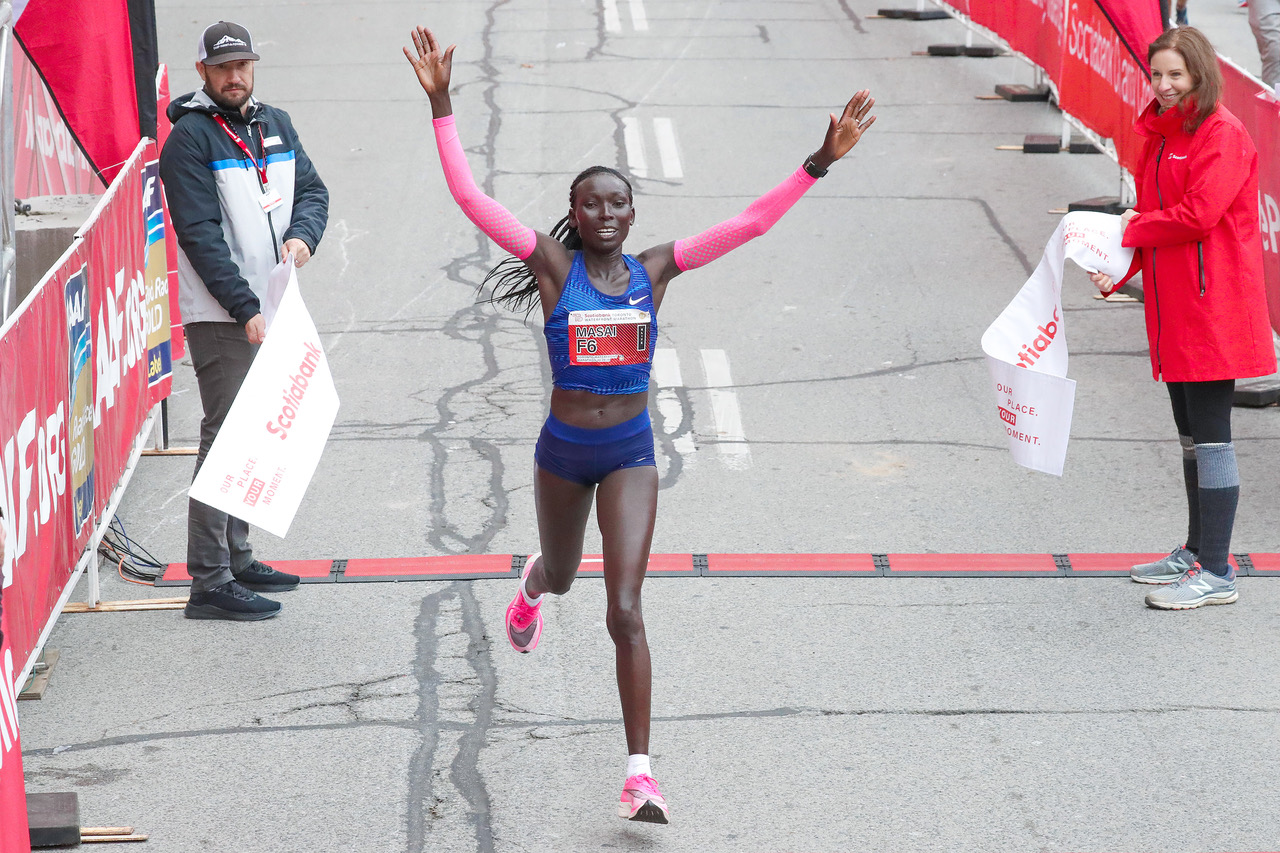 Kenya’s Magdalyne Masai hasn’t run a marathon in three years but that’s no cause for alarm. Her last effort resulted in a magnificent Canadian All-comers record of 2:22:16 on the streets of Toronto.

Returning to competition is a delightful dream.

“I am really excited because that was my last race that I did—until now,” she explains with a smile. “I lost (races) with the pandemic and now with Jake Jr. My training has been going well. We have got a lady who helps us take care of Jake Jr. when we are tired because we need to nap sometimes. And also, Jake Sr. has been helping out. He takes care of him when I am tired. So we get to help each other by sharing duties.

“We do have family nearby, but they also have their own children, or they are working and they have family life.”

Masai comes from a long line of great Kenyan 10,000m runners. Her older sister, Linet, was the 2008 Olympic 10,000m bronze medalist and 2009 world champion while eldest brother Moses was 4th at those Beijing Olympics. He went on to earn the bronze at the 2009 World Championships. Another brother, Dennis, won the 2010 World Junior Championships 10,000m in Moncton, New Brunswick.

Like runners across the globe, Magz, as she is affectionately known, was severely impacted by the Covid pandemic. The postponement of the 2020 Boston Marathon, for instance, was one significant blow.

“It was a shame,” she concedes. “Because I was supposed to be in Boston in 2020 and I thought I had an opportunity of doing well in a major marathon which could have changed our lives. But things did happen that were out of our control so we just lived with it.”

A hefty appearance fee plus the opportunity to win prize money awaited her in Boston, thanks to her great Toronto result.  But the race was postponed from its usual April date until October. That called for a change in plans. They flew to Jake’s hometown of Mount Maunganui,

200 kilometres southeast of Auckland, to wait out the pandemic.

“We were in New Zealand for the first six months of the pandemic, so I was training normally with Jake and with Zane, my brother-in-law,” she reveals. “Then with a couple of friends we met in New Zealand. New Zealand wasn’t really affected so life was kind of moving along normally. So we were able to move on with our daily lives. There were small restrictions.

“The problem was we were training with no goal which was hard sometimes. You would go two weeks, one month, and then hit those low points and then go, ‘What am I doing this for?’ There was darkness.”

Magz laughs at her words. Now, she is happy to report, things are going well as she prepares for Toronto.

“It is getting exciting. I am starting to feel ‘ok’ again,” she reveals.

“I don’t really start a week with a goal. I just train and then at the end of the week, sit down and count up how much I have been doing. So far, the most has been 145 km (in a week). Mainly I go with the feeling of the body. So far, my longest run two weeks ago was 40 km. It felt really good, and it has given me confidence. It gives you the feeling of the marathon.”

Besides maintaining her fitness during the pandemic—and raising her newborn son—Magz took on responsibility for the housing project she and Jake started three years ago. Initially, it was to be a single house for foreign runners to live in when they travel to Iten for altitude training.

“It has been built and we have built three more houses,” she reveals with excitement. “When we got back from New Zealand and I was expecting Jake Jr., I wasn’t training seriously. So, I was training and in charge of the building. They are next door to our house.”

If they appear to have extremely busy lives, it’s not surprising they have outside interests which help distract them from their work. They both follow NBA basketball. In fact, Jake attended a Toronto Raptors game two nights before his 5th place finish in the 2018 Toronto Waterfront Marathon, which obviously had a positive effect on his performance.

And, like many of her compatriots, Magz is also a keen supporter of Manchester United Football Club—something she has in common with Toronto Waterfront race director, Alan Brookes.

“I still follow Manchester United but they have been awful,” she says smiling. She buries her head in her hands before adding, “I have been following them but, honestly, how can they finish 6th (in the 2021-2022 Premier League standings) with Cristiano Ronaldo? What a good player.”

It is too early to affix a goal for her upcoming TCS Toronto Waterfront Marathon appearance. Marathons are unpredictable. But with training going well and with her determination to keep improving, her Canadian All Comers record could fall. Actually, racing again after being starved of competition for three years might prove to be the strongest motivator.