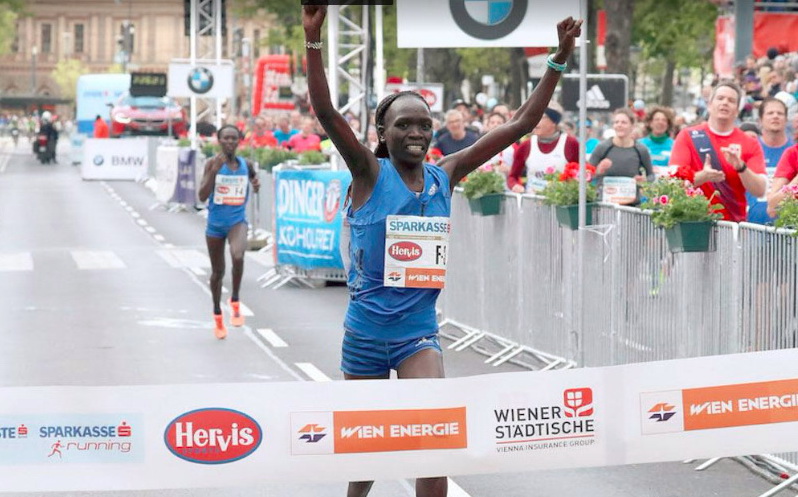 Defending champion Nancy Kiprop returns to the Vienna City Marathon on 22nd April. In one of the strongest women’s fields ever assembled for Austria’s number one road running event four athletes feature personal bests of sub 2:25. Kenya’s Kiprop is one of them with a PB of 2:24:20 but Helen Tola of Ethiopia has been well over a minute faster with a record of 2:22:51. The Vienna City Marathon is an IAAF Gold Label Road Race. Entries for the 35th edition of the race are still accepted online at: www.vienna-marathon.com

In a thrilling battle for victory Nancy Kiprop was just five seconds ahead in the Vienna City Marathon 2017, clocking her personal best. It was the closest women’s finish in the history of the event. And it could well end similar on 22nd April. „The 35th edition of the Vienna City Marathon will produce extraordinary class both in the elite races and with regard to staging the event as a whole,“ said Race Director Wolfgang Konrad. „We really want to impress in every aspect.“

“Without the wind I think I could have run 2:22,“ said Nancy Kiprop after winning in Vienna last year. Despite the wind she ran the second fastest time ever recorded in the race. With 2:24:20 the Kenyan missed the course record by just 33 seconds. Italy’s Maura Viceconte clocked 2:23:47 back in the year 2000.

Nancy Kiprop may have to further improve in Vienna to defend her title. Despite being already 38 years old she did just that last September in a half marathon. She was second in Usti nad Labem, Czech Republic, when she smashed her PB with a time of 67:22. Kiprop had never run sub 70 minutes before. If she is in similar form this spring the Kenyan will be ready for another very strong performance.

Three athletes are on the current start list who have already run faster than Nancy Kiprop. Among them is Helen Tola who showed very good form on two occasions during the past six months. First the Ethiopian improved to a great marathon PB of 2:22:51 when placing fourth in Berlin last September, then she ran another personal record in February. In an extraordinarily strong field at the Ras Al Khaimah Half Marathon in the United Arab Emirates Tola ran a quick 67:47. While this was only good enough for ninth place an improvement of two minutes showed that the 23-year-old is doing very well in the build-up to her spring marathon in Vienna. „I want to go for the course record. With the help of pacemakers I hope to break it,“ said Helen Tola, who currently trains in Ethiopia.

Fatuma Sado is another Ethiopian who did well recently and must be considered as a favourite. In January she won the Xiamen Marathon in China with 2:26:41. While Sado has a PB of 2:24:16 the 26-year-old has already won a number of international marathons. Among them are Warsaw in 2015, Beijing in 2014, Los Angeles in 2012 and Hamburg back in 2011. She ran sub 2:30 times on nine occasions.

Former Ethiopian Merima Mohammed, who starts for Bahrain since 2015, features a strong personal best of 2:23:06. However, that is already eight years old and Mohammed hardly competed for a couple of years. But her only international race last year might well give her confidence that she can get back to her best: In Frankfurt she finished sixth with 2:27:49.