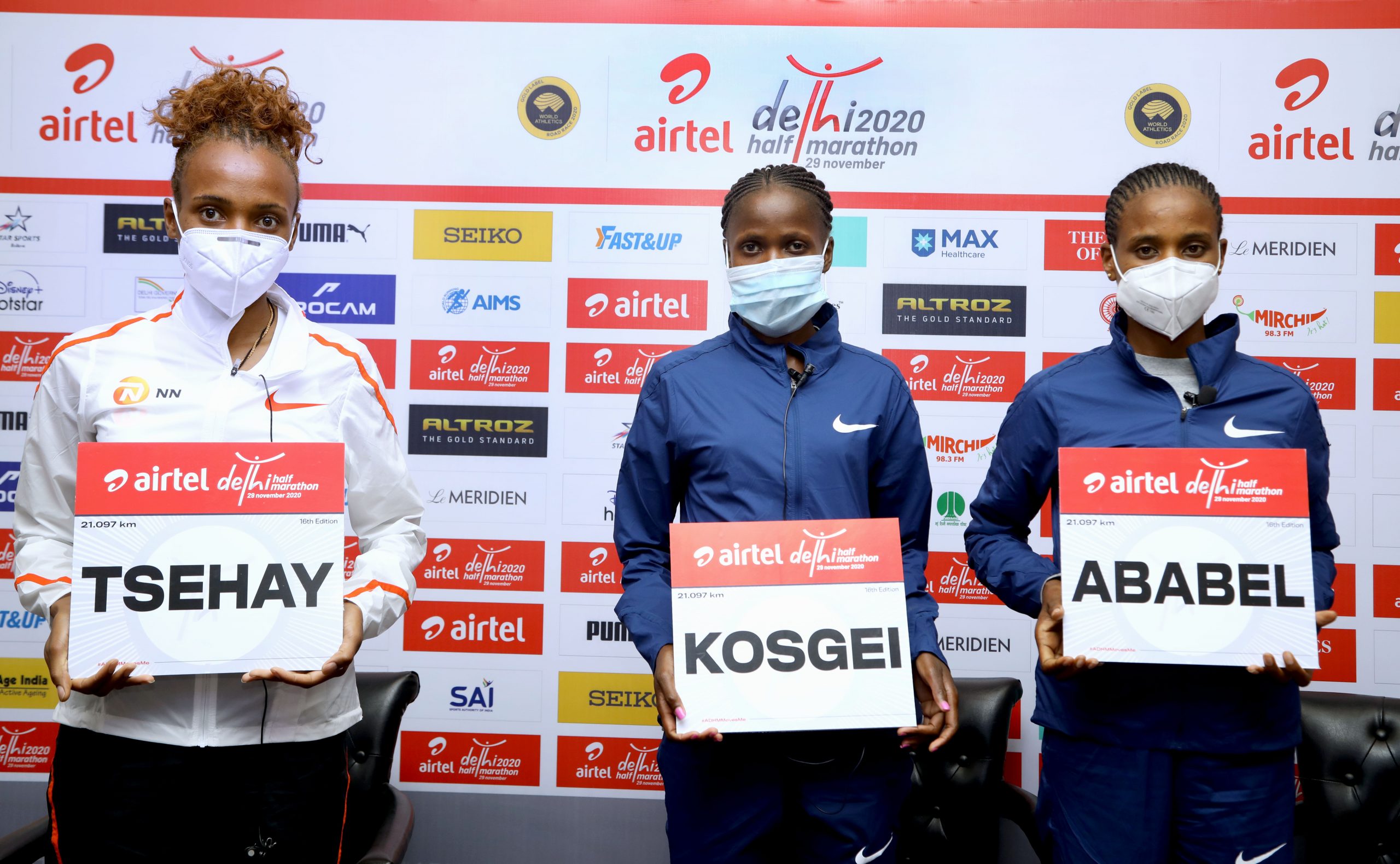 Thursday 26 November 2020 (for immediate use) – The topic of discussion
at the traditional pre-race press conference for the Airtel Delhi Half
Marathon on Thursday was whether the course records could be broken
at this year’s World Athletics Gold Label Road Race on Sunday (29).
The response was resoundingly positive from everyone.

“I have been training very well, and I was disappointed with my fifth place
at the World Half Marathon Championships in Poland last month, so I am
in shape and very motivated to run well here,” commented the two-time
men’s defending champion Andamlak Belihu, from Ethiopia.

“Last year, I was just four seconds outside the course record (59:06 set by
Ethiopia’s Guye Adola in 2014) and I think I can find the difference.”
On Sunday, Belihu will be bidding for an unprecedented third successive
title in the Indian capital but the course he will cover is radically different
to the one he won in 2018 and 2019.

To comply with prevailing health-related related measures, the runners will
cover around 4.5 kilometres, starting at the Jawaharlal Nehru Stadium,
and then embark on two loops of approximately six kilometres, before
returning to the finish outside the stadium by the same route.
“However, with smoother corners, fewer undulations and with the elite

runners not having to contend with mass-race participants, I believe this is
a faster course than previous years,” said race director Hugh Jones.

Belihu’s compatriot Tsehay Gemechu, who revised the women’s course
record when winning in both 2018 and 2019 – it currently stands at 66:00 –
concurred with the comments about course records being in danger.

“I am in shape to go even faster than last year,” said Gemechu. However,
the defending champion will face an even stronger set of rivals on Sunday
than the two outstanding fields she defeated in the past two years.
On the start line will be Gemechu’s fellow Ethiopian and world half
marathon record holder Ababel Yeshaneh.

“I am coming here looking to show what I can do after finishing fifth at the
World Half. I fell there (about three kilometres from the finish) and was very
frustrated, finishing in tears, because I know I was in shape to win but you
just have to pick yourself up and carry on. I have brought the shape I had
in Poland to Delhi,” said Yeshaneh.

This year’s Airtel Delhi Half Marathon can boast of not one but two world
record holders in the women’s race.

Kenya’s Brigid Kosgei stunned the world when she broke the long-standing
women’s world marathon record by more than a minute at 2019 Chicago
Marathon, clocking 2:14:04, with Yeshaneh a distant second on that
occasion although she still ran a superb personal best of 2:20:51.

However, at the Ras Al Khaimah Half Marathon in February this year
Yeshaneh prevailed in a world record 64:31 with Kosgei second in 64:49.
More recently, Kosgei won the London Marathon on 4 October in 2:18:58.

“After London, I took 10 days off, but I have since had six weeks of very good
preparation for this race. I have a good record in half marathons, but I am
not going to make predictions about this race as it is a very tough field.
Some of the ladies may be better prepared as they competed at the
World Half Marathon Championships last month,” commented Kosgei.