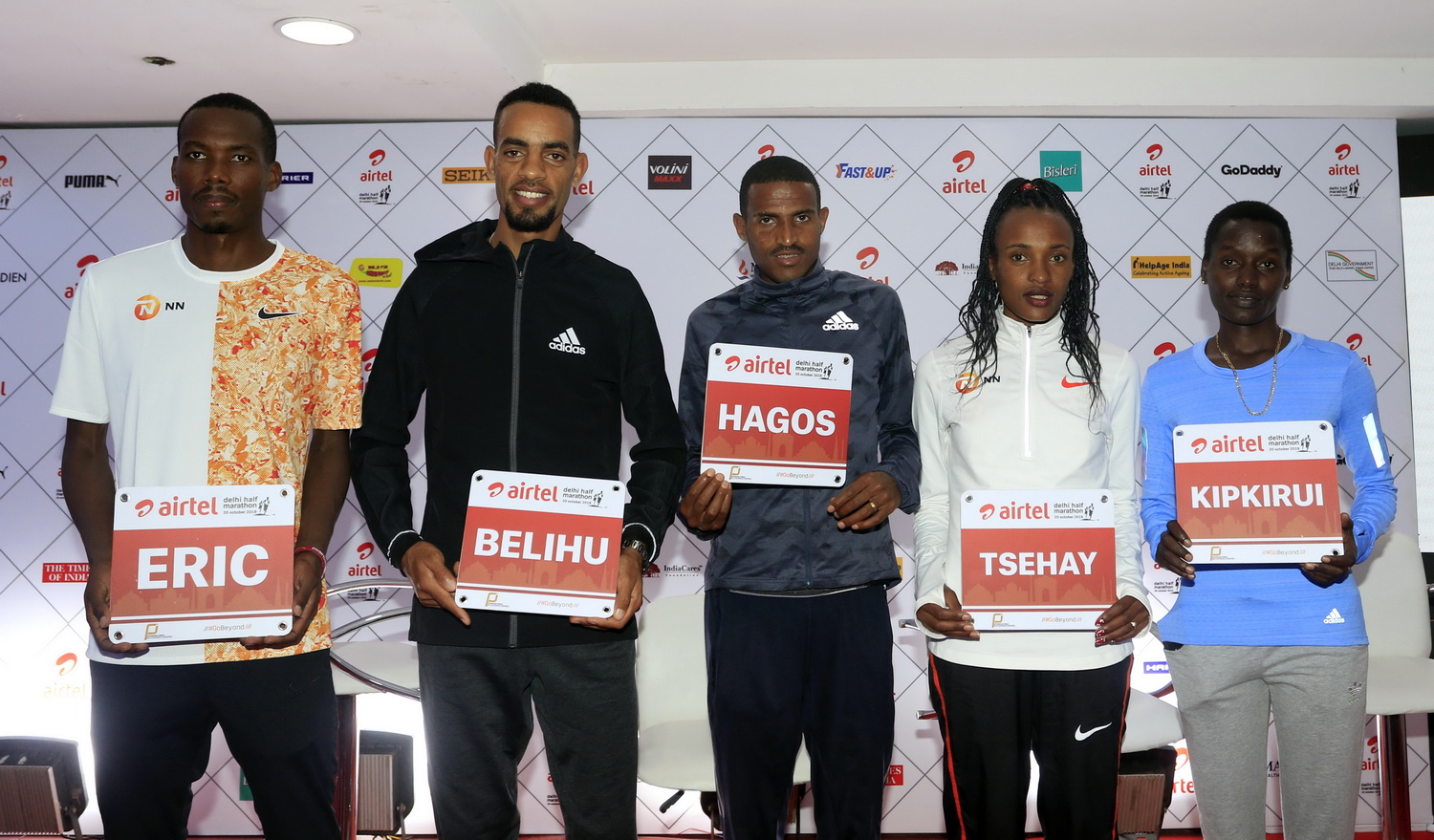 Defending Airtel Delhi Half Marathon champions Andamlak Belihu and Tsehay
Gemechu made their intentions clear at the traditional pre-event press conference, the Ethiopian pair are going all out to attack the IAAF Gold Label Road Race’s course records on Sunday 20th October.

Belihu won in India’s capital city last year in 59:18, just missing out on the course record of 59:06 held since 2014 by his compatriot Guye Adola.

In 2019, he has represented his nation at both the World Cross Country Championships and World Athletics Championships, finishing fifth over 10,000m at the latter event less than two weeks ago.

“I had two to three months of very good training before the world championships. I was preparing for Doha but also remembering what I wanted to do here,” commented Belihu, who is still only 20.

“It was a little frustrating just missing out on the course record last year but after coming here and doing well in Delhi in the last two years, I have experience and think I know what it takes go faster. The most important thing is to win but if the pace is good, I can beat the course record.”

Belihu’s one road outing this year was when he returned to India in May to win the TCS World 10K in Bengaluru, another IAAF Gold Label Road Race promoted by ADHM organisers Procam International.

Seven men in the ADHM 2019 have run under the world-class benchmark of one hour but a big threat to Belihu’s bid to retain his title is expected to come from a man who has yet to run the distance, Hagos Gebrhiwet.

Gebrhiwet had planned to make his half marathon debut in Delhi last year but a late bout of illness curtailed his training and he had to cancel his trip. However, the two-time world championships 5000m medallist is in Delhi this time around and wants to exorcise his frustrations at only being able to finish 10th in the Doha 10,000m, despite having gone to the world championships as the fastest man in the world over 25 laps of the track.
“I am excited to make my debut at the half marathon. Andamlak has told me about this race and so I know that it is a very fast course,” said Gebrhiwet, who will be running his longest ever competitive race on Sunday and so going into unknown territory despite his championship credentials.

Last year, Tsehay Gemechu made a huge impact in on her debut over the distance when she set an Airtel Delhi Half Marathon women’s course record of 66:50. In 2019 she has shown it was no fluke unleashing a string of sparkling performances both on the roads and the track, including winning a high-quality Valencia 10km race at the start of the year and taking the African Games 10,000m title, setting personal bests over a variety of distances.

“Last year, I didn’t know much about running in this level of race, but I have had a lot more experience since then,” reflected Gemechu. “I have had a good year, run a lot on the track and won at the African Games as well as having gone to the world championships in Doha. I finished fourth over 5000m there so I just missed out on a medal but I’m only 21 so I think I will have more opportunities.

“But it was a fast race in Doha and I showed I was in good shape ahead of this race, so I think another course record here is a possibility,” she added. Like with the men’s race, Procam International has also brought a classy set of women runners to Delhi.
Among Gemechu’s leading rivals will be the Kenyan-born Caroline Kipkirui, the fastest woman in the race with a best of 65:07 who now flies the flag for Kazakhstan.

“This will be a very tough race. The Ethiopian women are very strong but don’t discount me and the Kenyans like (Edith) Chelimo and (Irene) Cheptai,” said Kipkirui, who is sixth on the all-time list for the distance.

“I am also proud to say that we are one of the faces of the Fit India Movement launched by Prime Minister Narendra Modi on 29th August. The message is for people everywhere to lace up their shoes and get involved. It is so important that people see their friends and family running, whatever the distance,” he added.