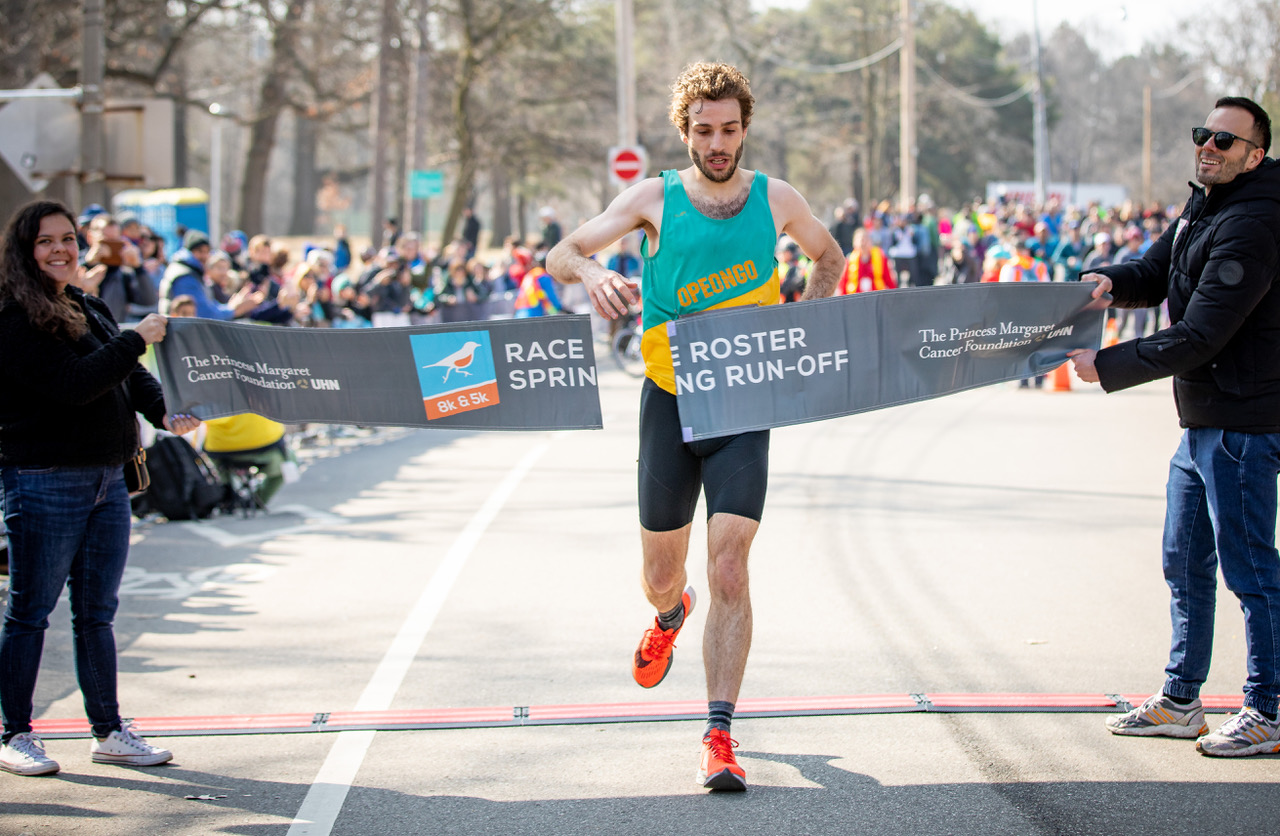 Tristan Woodfine spent seven weeks at a Kenyan high-altitude training camp earlier this year his trip funded with prize money earned for winning the 2019 Canada Running Series overall title. Like all of us, the Covid-19 pandemic put a swift halt to carefully laid out plans which included chasing the Olympic standard in London last month.

“Things were going really well. I ran the Houston Half Marathon in January and that went well,” he says of his 63:33 clocking, a personal best by more than a minute.

“I built a lot of momentum and things were going really well and then things all came crashing down. Unfortunately, no races! I built a lot of fitness and have been trying to carry that momentum for when races start up again.”

His 2019 CRS championship ended with a huge personal best of 2:13:16 at the Scotiabank
Toronto Waterfront Marathon. It began with his third consecutive victory at the Race Roster
Spring Run-Off 8K. Now he joins the women’s winner from last year’s race, Sarah Inglis, in
taking part in the Under Armour Spring Run-Off Virtual Race.

Woodfine has never before participated in a virtual race. The concept of recording a solo effort over a personal 8 kilometre course then submitting the times online has a tremendous upside.

Although there will a temptation to choose a faster route than the hilly High Park course
Woodfine emphasizes he will challenge himself.

“I think it’s a good opportunity for people to test themselves,” he declares. “At the same time it is nice to be able to get out the door and push your limits. For a lot of runners that is one of the big factors towards why you train and get out the door every morning – to test your limits.

“I have a few ideas (for a course). Definitely, I will try to pick something hilly to honour the ‘Kill the Hill Challenge’ because that is one of the reasons why it was one of my favourite races. It has got some gnarly hills. So I imagine I am going to try and find a course that is at least as hilly if not hillier to test myself. Plus, a good hard hilly 8km is the perfect effort to get in right now.”

These days Woodfine is living in a farmhouse twenty minutes outside Foymount, Ontario with little mobile phone reception. He must drive in to town occasionally to make calls. The isolation, he says, works for him. Four thousand kilometres away Sarah Inglis is also handling the Covid-19 self isolation with aplomb.

Inglis, 28, whose work as an elementary school physical education teacher in Langley, B.C. has also been put on hold says she has found time to increase her mileage hitting up to 100 miles (160km) in a week. She has experienced virtual races before.

“I have actually done a couple just one this year so far,” she reveals. “Back in Scotland they had the Scottish road relay championships. They had teams of four so I decided to get teammates of mine (Langley Mustangs) – two girls and two guys – each doing a five kilometre leg. Then we soloed, recorded our time and put it together for the championships. We ended up winning as first ‘mixed team’ which was quite good.”

Though she is a landed immigrant in Canada she retains close ties to Scotland and prior to the pandemic she was picked to represent Britain at the World Half Marathon Championships in Gdynia, Poland. Those championships have been pushed back to October 17th. The severity of the Covid-19 illness has hit home. Two of her cousins back in Scotland have been ill for the past five weeks and Covid-19 is suspected. Still, she maintains regular training with her boyfriend Ron Loewen.

“If people have the time and that’s feasible then I would suggest getting in the virtual race. It gives you that excitement and nerves,” she adds. “Even when I did that 5k time trial I still got that race day nerves. I was excited to see what I could do.

“In Langley, there is really flat straight road. We use that for our time trials which we did
recently. That is about pancake flat but I think it would be nice to include a steep hill at the end which mimics High Park. I am not 100 % sure which route I will choose. I may add that hill in just for fun.”

When advised that Tristan Woodfine will honour the Kill The Hill challenge she vowed to “find a good 1km hill then, ha, ha!”

“Over four decades, our mission at Canada Running Series has been ‘Building Community
Through Running’,” he declares. “This is needed now more than ever and we believe ‘virtual
races’ are a key component in keeping us connected, celebrating and rewarding our running experiences.

“They also help us to continue supporting our charities, and through the training, helping us stay motivated with a plan and a structure to our lives, week by week. In short, they are the next best thing to what real-life races do for us!”

Registration for the Virtual Under Armour Spring Run-Off races is now open, and participants can complete their 8K or 5K anytime between May 4th and July 1st, when it is safe and responsible to do so, wherever they live.

On signing up, everyone gets a downloadable bib that they can print off and wear, or use on social media. On completion, they can upload their time to the race results page with official timing company SportStats. They can then download a badge, a Finish Line photo, plus a 25% discount coupon for UnderArmour.ca. To complete the rewards, their official Under Armour race t-shirt and finisher’s medal will be mailed to them.