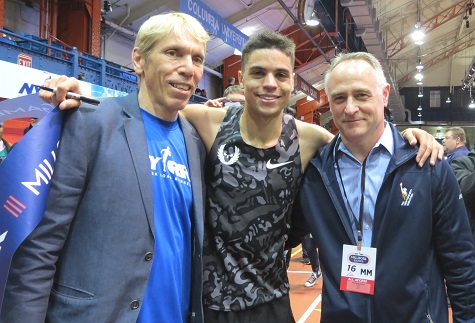 Cherry Alexander is leaving UK Athletics (UKA) after working there for the past 29 years.

“So my journey with British Athletics has come to an end,” she posted to Twitter.

Alexander was involved with at least 22 global event over the near three-decade run that she had with UKA.

She will continue to be involved in the sport of athletics. She has started a venture named Cherry and Company.

I’ve enjoyed every minute of my 29 years in @BritAthletics and wish nothing but the best for the sport and the athletes in the future….

Thank you to all who have been part of this amazing dream job for me https://t.co/2VG6wQM7mU pic.twitter.com/hx31zquB6x

Michal Capiraso will step down as president and chief executive officer of New York Road Runners (NYRR) on December 31, the organization announced today. NYRR is the world’s largest organizer of running races, and Capiraso has had a ten-year career there. Kerin Hempel, a former NYRR executive and consultant, has been named interim CEO. The board of directors has launched an outside search for Capiraso’s replacement.

Capiraso’s departure was preceded by a tumultuous time for NYRR. The 62-year-old organization was hit especially hard by the pandemic, forcing a complete halt to it’s in-person running events (recently restarted) including the marquis TCS New York City Marathon, the world’s largest. They were forced to reduce their staff, mostly through furloughs.

“Over the past several months, the board of directors has listened to the concerns raised and recommendations offered by the community NYRR serves, including its employees and members of the broader running community,” said board chairman George Hirsch through a statement. “In order to achieve our mission to help and inspire people through running, we will recruit new leadership to the organization. The entire board of directors and I thank Michael Capiraso for his 10 years of contributions and dedication to this organization.”

Capiraso became CEO after the departure of Mary Wittenberg in 2015. He shared the top leadership of NYRR with Peter Ciaccia who was president of events. Ciaccia retired in 2018, was not replaced, and Capiraso assumed the title of president.

An avid runner, Capiraso has run 325 NYRR races, according to results.nyrr.org. He first ran the TCS New York City Marathon in 1991 and has run it every year through 2019 (except in 2012 when the race was cancelled).