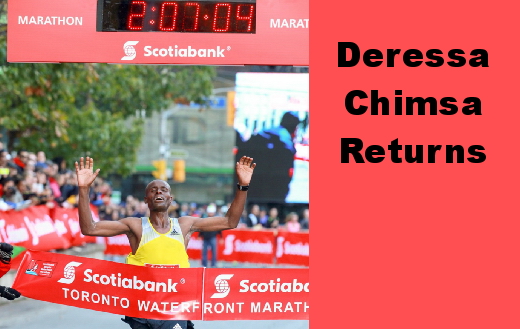 Deressa Chimsa thrilled spectators at the Scotiabank Toronto Waterfront Marathon two years ago, running away from an incredibly strong field and claiming victory in a Canadian All Comers’ record of 2:07:05.

Now the Ethiopian star has confirmed he will return and tackle his course record in this IAAF Gold Label race, Sunday October 18th.

Ironically, Chimsa wasn’t meant to run Toronto in 2013. He was a late addition after one of his training partners was forced to withdraw from the race due to an injury. Race director Alan Brookes’ budget opened up and Chimsa’s agent had, what turned out to be, the perfect substitute.

“The training is going well and with six weeks to go, if I’ll not have any problem, I hope to be able to perform at my best in Toronto,” he said from his training base in Addis Ababa, Ethiopia. “I ran actually 210-230 kilometres a week, sometime fast, sometimes slowly. This week I’ll start the special period for the marathon training.”

This year’s Scotiabank Toronto Waterfront Marathon will serve as the Canadian marathon championships as well as being lauded with IAAF Gold Label status. Chimsa, who has a best time of 2:05:42 recorded at the 2012 Dubai Marathon knows he will be facing the 2014 champion, Laban Korir of Kenya, this time but relishes the challenge. A year ago he couldn’t defend his title.

“Unfortunately I was preparing for Toronto last year but an injury made me unable to train for a few weeks and I had to postpone racing this marathon,” he explains.

“No problem, when I’m ready I’m not afraid of anybody. As I said, when I won Toronto it was not my race because I entered Toronto just one month before the race. Shami Dawid from Ethiopia was injured and when they proposed it to me I accepted because I was strong in training and I did not want to wait until November and lose the shape.”

Chimsa remembers well his first glorious visit to Toronto as he knows he made a grievous error in following a pace car when it turned off the course in the finishing stretch. He is still kicking himself though he appears to have thoroughly enjoyed his time in Canada’s biggest city. Besides taking the $20,000 first place prize that day he earned another $35,000 for the Canadian All Comers’ record.

“It was one of the best days of my career,” he declares. “I won with the course record and running in front the last 10 km. The worst thing happened to me the last 300m when I followed the television car and I went off the course and I lost, for sure, more than 20 seconds.

“We went to an Ethiopian restaurant and it was a surprise for me because in other towns where I ran the marathon there are no Ethiopian restaurants. It was a good evening because I received a lot of congratulations from Ethiopians living in Toronto and also during the race there were some Ethiopian spectators helping me.”

The course record is one challenge. But he also knows he can’t predict what shape he will be in come race time.

“All the athletes would like always to go faster but it depends not only about my shape but also about the course.” he says. “If the climate and the wind will be ok I can again run near 2:07 or under – if the pacers are ok and able to go till 30km in a correct pace. There are very many variables in the marathon but the most important thing is my shape.”

Chimsa is 28 years old now and hails from the village of Kore Edo near Holeta Genet about 35 kilometres north of Addis. His parents are farmers and when he is between marathon races he likes to return to visit them and his two sisters and three brothers.

Normally he races two top quality marathons a year. On April 12th of this year he ran 2:07:56 at the Paris Marathon good for seventh place just two seconds behind one Laban Korir. It’s no surprise that he was disappointed with the result blaming it on a poor buildup due to an injury.

What the future holds for Chimsa is anybody’s guess. He has a wealth of experience and he has ambition. But he is also pragmatic.

“I was already at the IAAF World Half Marathon Championships and I won a silver medal,” he reminds a journalist. “I dream of representing Ethiopia at the Olympic games, but with all the new generation running so fast I know that will be difficult. In any case my goal is to win some top marathons in the next years.

“I would like to compete for another ten years. I hope injuries will not affect me (or not so much) in the future. You know your body has to support you, otherwise it is difficult to run. Then I want to share my experiences with the new athletes coming out and I would like to remain and work in athletics. Ethiopia has many big talents, so I think it would be great to coach new athletes and develop them.”

Many of the top Ethiopians have invested their earnings in businesses at home following the example of the great Haile Gebrselassie. But Chimsa is in no rush. He is focusing on his running career now, taking it one race at a time. Along with Laban Korir it will be a fine race when they line up in Toronto.