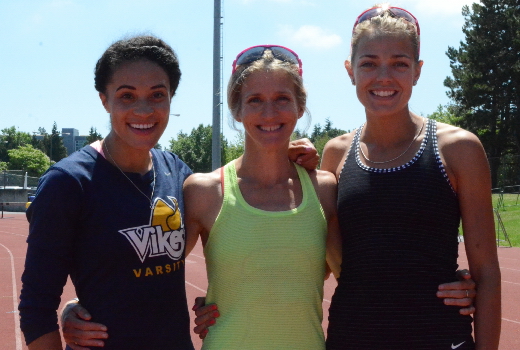 After twenty-plus years of competing internationally for Canada Diane Cummins, the national 800m record holder, is in her final season of competition and she plans to go out kicking and potentially screaming. She has two more opportunities this week to lower her season best times to a level where she can accept invitations into the prestigious European track racing scene – her season best is a strong 2:02.36. She will race the Victoria Track Classic on Tuesday, July 8th in Victoria, BC and the Harry Jerome Track Classic in Vancouver two days later. Both meets are part of the National Track League, as are the Edmonton International Track Classic that took place, July 5th and 6th and the Aileen Meagher International that took place in Halifax, Nova Scotia on June 14th. She is in great form and is expecting to race well. “I am in excellent shape, I have a great coach and I am ready to race well tomorrow night,” said Cummins.

Right on Cummins’s heels is a bevy of Canadian women, two of whom have run under two minutes – a benchmark of quality that commands universal respect in the track world – they are Eganville, Ontario’s Melissa Bishop (1:59.82) and North Vancouver’s Jessica Smith (1:59.86). There are a total of four women who have eclipsed the benchmark in Canadian history. Charmaine Crookes held the Canadian record at 1:58.52 before Cummins took it in 2001, with her 1:58.39.

Also not far off the lead women are Vancouver’s Helen Crofts, Montreal’s Karine Belleau-Béliveau, Victoria’s Lemlem Bereket and Edmonton’s Rachel Francois. Francois competes for the University of Victoria Vikes. She raced in the Edmonton meet; however, the wind was very strong and prevented fast times. Francois is looking for a season’s best. She made an improvement by nearly two seconds to 2:02.82 during the 2014 season and looks to continue her outstanding season. Asked if she will go through the 400m (half-way) as fast as Bishop and Cummins (:57/:58), the former 400m runner said, “I will be just back of them a little, but look to have the best race of my season tomorrow.”

Bishop, the national champion has run as fast as 2:00.73 in 2014 at the USATF High Performance meet (formerly the “Oxy” meet), she finished third behind Americans Maggie Vessey who finished in 1:59.96 and Brenda Martinez with her 1:59.91. Bishop’s lifetime best is 1:59.68. The heir apparent to Cummins’s position as Canada’s greatest 800m runner is rounding nicely into form and is expected to have a fantastic race. “We expect to go through 400m (half-way) in 57 seconds and 1:27/1:28 at the 600m mark,” said Bishop, who may be in position tomorrow night to take Cummins’s national record. “How awesome would that be if Melissa takes the Canadian record here, while I am also in the race? She is very talented and may very well do it,” said Cummins.

Also in the race is American Christina Rodgers who has run as fast as 2:01.75 this year.