Richard (Dick) Pound is the former president of the World Anti-Doping Agency (WADA). It was his brainchild to put the agency together and he was responsible for the code of ethics and the governing structure that are currently in place. He is also a former vice-president of the International Olympic Committee (IOC) and currently serves on several boards and committees for WADA and the IOC. Pound is a partner with the law firm Stikeman Elliot, specialising in tax law.

Starting in 1978, Pound began to revolutionise the Olympic movement by leveraging very large and lucrative television and sponsorship agreements that he was instrumental in creating; to re-shape the IOC into a multi-billion dollar enterprise.

As an athlete he won several swim medals during the 1962 Perth Commonwealth Games after having competed in the 1960 Rome Olympics.

Pound was made an Officer of the Order of Canada in 1992. Six years later, the government of Japan awarded him Gold and Silver Star of the Order of the Sacred Treasure, which is an award equivalent to the Order of the British Empire. The award was established in 1888 to those who have made distinguished achievements in research fields, business industries, healthcare, social work, state/local government fields or the improvement of life for handicapped/impaired persons. In 2005, Time Magazine named him one of the World’s 100 most influential people, they wrote:

Pound: It’s an appropriate surname for the head of the World Anti-Doping Agency (WADA). Then again, so would be harass, rebuke, scold, and generally-makes-a-pain-in-the-ass-of-himself, although the latter would look awkward on a business card. The relentless Dick Pound, 63, has been a prime mover in freeing the Olympic world from the taint of illicit, performance-enhancing drugs, and he isn’t going to stop until he has all the world’s sports in the tent.

Christopher Kelsall: Are you surprised by Lance Armstrong’s sociopathic-like behaviour of late?

CK: What do you make of the rumour suggesting that he may want to admit to doping, so he can commence competing at the age of 41.

DP: I think he thought he was above all this and could keep the myth alive. It would be interesting to know what has happened as his false world has come crashing down.

CK: Is it presumed that all riders in the Tour are cheaters? Perhaps his strategy is to reinvent himself as a victim of the sport.

DP: It is certainly known that cycling has one of the most serious doping problems, but I would hesitate to assert that every single rider in the Tour is doped. It certainly looks as if there is a huge percentage of the most successful riders who dope. I am not sure what strategy Armstrong might choose to adopt, but when you are the enforcer for your team, it is largely unpersuasive to claim that you were the victim of the sport. He may have been the victim of his own obsession with winning, whatever the cost and moral compromise involved.

CK: Are you familiar with Hans-Joachim Seppelt, the German journalist who posed as a sport agent while in Kenya to see how easily one could attain banned PEDs? If so were you surprised by his findings and Isaiah Kiplagat’s response to it?

DP: I am generally aware and the response is not uncommon when one gets caught with one’s pants down.

CK: Arguably the most successful athletics coach in the world, Italy’s Renato Canova, is registered with Athletics Kenya, so therefore not ordered to leave. He is known to for saying that EPO and/or PEDs do not work on Kenyan athletes. What are your thoughts on his opinion about that?

DP: With the greatest of respect, that is complete and utter nonsense. It is like (Gary) Bettman (NHL Commissioner) and (Sepp) Blatter (FIFA President) saying that nothing on the WADA list would help a hockey/football players, so the athletes do not take them, and because none of the athletes take them, there is no need to have tests….

CK: So what in your mind would his motivation be to make that claim? Would you suggest that he is involved with athletes that he knows are taking performance enhancing drugs? 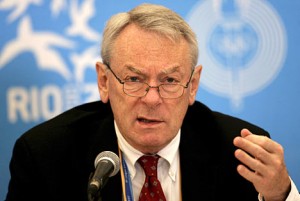 DP: Denial. That statement is flying straight into the face of scientific proof. It is possible that he could be involved with athletes that are taking performance enhancing drugs.

CK: Were you paraphrasing Bettman and Blatter?

DP: Yes. Absolutely, they have said as much.

CK: In 2001 you ran for the Presidency of the International Olympic Committee and finished third behind Jacques Rogge and Kim Un-Yong. Was your outspoken criticism of ongoing corruption that was rife in the IOC what lost it for you? (It is ironic that Kim Un-Yong was later found to be involved in the Salt Lake City Olympic scandals).

DP: I think that was certainly part of the reason. There were many members who felt exposed by the inquiry and resented even the questions asked of them. In my experience, people like the idea of a “clean” organisation, but do not like the cleaners. Many of the Europeans expressed the thought (aloud) that it was unthinkable not to have a European president of the IOC. Rules were put in that effectively prevented me from travelling to meet IOC members. And I think many members resented the profile I had as a result of the television negotiations and marketing successes. Plus, I am not a very good campaigner!

CK: Did the Europeans feel this way because the sport of athletics has much more fan support in Europe than other parts of the world?

DP: The Europeans think that they should run all international sport, including the IOC. There has been only one non-European IOC president in the history of the IOC.  The overwhelming majority of all IFs are based in Europe (most in Switzerland).

CK: Can you provide an example of a rule that was put in place to keep you from travelling to meet IOC members?

DP: Just as I was getting ready to raise some money for travel, the IOC Executive Board (led by Kéba Mbaye) adopted rules that prevented anyone from raising money for a campaign. There was one voting member within 2,000 miles of Montreal. Compare that with Belgium and Hungary. I called (Juan Antonio) Samaranch, the president of the IOC at the time and he suggested I call Mbay about this. I did and his response was, “you can take a cheap flight and sit on the back of the plane”. Meanwhile European-based members can campaign much more easily. (as voting members primarily reside in Europe).

CK: WADA is funded equally by national governments and the Olympic movement. According to the Cape Town Declaration, governments will be invoiced based on their ability to pay, the declaration reads:

1.1.to adopt a formula for government contributions that is fair and equitable and encourages as many governments/public authorities as are able to make contributions, while taking account of each government’s capacity to pay and each nation’s level of involvement in international sport. The formula provides for the following allocations to be paid by each region:

How is it that China contributes just 16% of the amount Japan pays and likewise how are Italy and Russia invoiced at the same amount – $716,000 each?

DP: This was a formula agreed to by governments. For me, the most important thing was not the percentage (Canada and the US pay far more than their shares on a population basis), but having every single country participate in the financial support.

CK: You have been honoured in sport, both as an athlete and executive and you have been honoured as a lawyer. For example Time Magazine, named you as one of the 100 most influential people in the world for your anti-doping efforts. You also have the highest rating under the Martindale-Hubbell Peer Review Ratings in law. Do you get as much personal satisfaction from practising tax law as you get from your anti-doping efforts? What, in your long list of accomplishments is most satisfying?

DP: Basically, I have enjoyed pretty well everything I do, both professionally and as a volunteer. Tax law is an intellectual and demanding career, which, as a CPA and lawyer, is particularly satisfying. I write a lot of professional material and am editor-in-chief of a number of publications, one of which is a movie-type review (4 stars, 3 stars, etc) of every reported tax case decided by the Canadian courts.

As a volunteer, my main interests have been sport and education, the latter mainly involving McGill University (of which I have been president of the alumni association, Chair of the Board of Governors and Chancellor). Being Secretary, then president of the COC, being coopted as an IOC member, all at a very young age, was a wonderful experience. Bringing the television and marketing activities under control and then developing them into billion dollar operations was very satisfying. Building an international system to help the fight against doping was also an interesting challenge (and added to my understanding of human nature!).

So, it is hard to pick a single element.