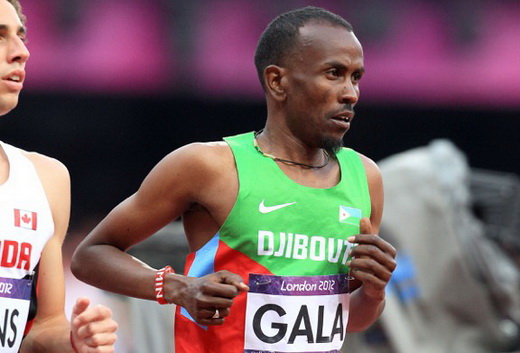 With their medal-winning performances at the1985 IAAF World Cup Marathon in Hiroshima a pair of Djiboutian runners left international sports journalists scratching their heads with one hand while turning the pages of a global atlas with the other.

“Where on earth is Djibouti?” they cried in unison.

Ahmed Salah and Djama Robleh finished first and third respectively, stunning the world-class field and further adding to their legend by leading the country to the team gold medal.

Salah would defend his World Cup title two years later in Seoul before earning silver medals at both the 1987 and 1991 IAAF World Championships.  Although Salah and Robleh became national heroes, since then the country has not had anywhere near the level of success in the long-distance events. Mumin Gala is hoping to change that.

Gala celebrated his 31st birthday on September 6th and has announced he will race the Scotiabank Toronto Waterfront Marathon on October 22nd. This will be his first marathon since finishing 12th in the Rio Olympics in 2:13:04 – just two places behind Canada’s Eric Gillis.

Though he had qualified to represent Djibouti at the 2017 IAAF World Championships, in the days leading up to the race, he decided not to run after injuring his calf. Now all his heavy marathon training is expected to pay off on the streets of Canada’s largest city.

He also represented his native country at the 2012 Olympics and finished 13th in the 5000m. He spent a few years in England racing as a member of the Newham and Essex Beagles whose most illustrious member is legendary distance runner Mo Farah. With a personal best 5000m time of 13:17.77 he realized his limitations on the track. These days he spends most of his time in Ethiopia’s high altitude, training with a marathon group.

“I was born in Djibouti City (the capital). I left Djibouti in 2003 and went to London,” Gala says. “In the past I trained with Mo Farah but not since he moved to the US. I live in Addis most of the time. I would say between nine and ten months of the year. My coach is Haji Adilo and he coaches a lot of elite athletes such as Tadese Tola and Lelisa Desisa.”

Adilo’s group can number around 100 men and women on any given day and Tola and Desisa are two exceptionally competent ‘training partners’. Tola claimed the marathon bronze medal at the 2013 IAAF World Championships while Desisa has twice won Boston.

Though he may appear to be a wandering soul, piling on the air miles as he goes back and forth between Djibouti and Ethiopia with occasional trips to England for good measure, Gala calls Djibouti “home sweet home.”

“I have a family in Djibouti and two beautiful girls ages one and four. I try to visit them as often as possible,” he declares. “I spend time with my kids at home. If I go to London I visit my brother and the rest of the time is training and going to the gym.”

Mumin is tremendously optimistic about his prospects at the Scotiabank Toronto Waterfront Marathon and has good reason to be. That rain-soaked 12th place finish at the Rio Olympics, was his first serious attempt at the distance. He had run Hamburg in April 2016, just to get a qualifying mark.  Earlier this year he improved his personal best half marathon time, finishing 3rd in the Rabat International Half Marathon in 1:02:41 and hasn’t come close to tapping his marathon potential.

And a great race is what he will surely find when the starter’s pistol fires. As the first runner from Djibouti to race Toronto he faces the formidable Kenyans Dickson Chumba (a past Tokyo and Chicago winner) and the defending Toronto champion, Philemon Rono. Ethiopia will counter with Endeshaw Negesse, the 2015 Tokyo Marathon champion (personal best of 2:04:52) and Solomon Deksisa, who ran 2:06:22 at the 2016 Rotterdam Marathon.

Clearly, the stage is set for a memorable race in Toronto. Weather permitting, the course record (2:07:05) and Canadian All Comer’s records (2:06:54) are legitimate targets, but more than anything Gala wants to restore Djibouti’s name to the top of marathoning.