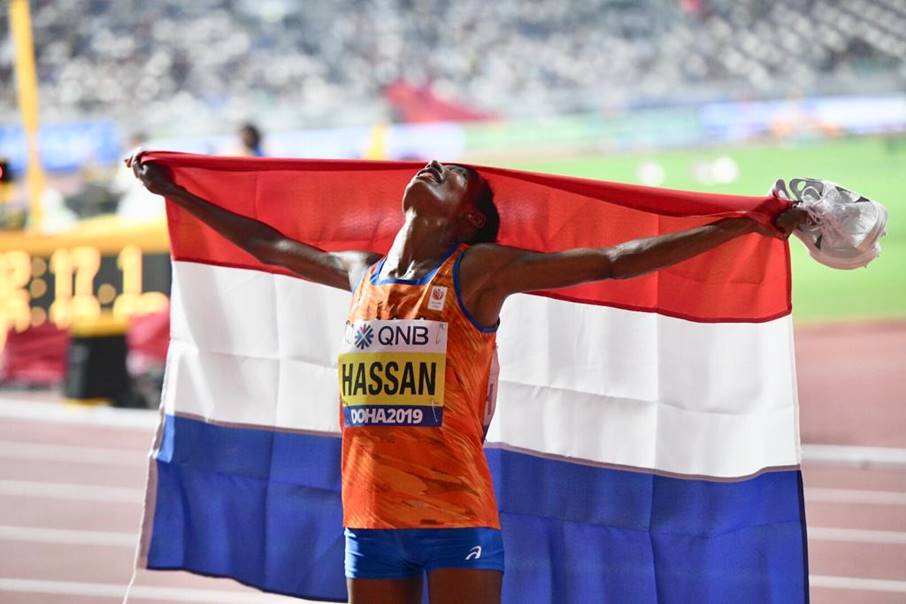 Sifan Hassan won her first world championship title in the 10,000-metre event in Doha at the 2019 IAAF World Athletics Championships.

She raced to a world-class time of 30:17.63. She shook off a strong Kenyan attempt but came out on top. Fellow GSC athlete Letesenbet Gidey of Ethiopia took home the silver in 30:21.23 while Agnes Tirop from Kenya completed the podium.

The performance is the 28th fastest in history and she is now the 19th fastest woman, all-time. The world record is currently held by Ethiopian Almaz Ayana with her Rio Olympic performance of 29:17:45.

Hassan ran the final 1500m in approximately 3:59, fast enough to win the 1500m on the right day. The former Ethiopian athlete, now running for the Netherlands has one of the world’s all-time best ranges from 800m to the marathon, having run as fast as 1:56.81 for the two laps, and a 65:15 half-marathon, the 10,000m gold-medal performances is a new personal best.

During the fastest race of the year, Hassan was able to follow the leading group and took over control with one lap to go. In a strong dash to the finish line, it was between herself and Gidey with Hassan coming out as the champion.

“What an incredible feeling. I could never have imagined how good this feels. It took a while for the race get really going but as it passed by I got better and better. It was a difficult race but I remained calm and focussed and I turned out to be the best today. I have matured over the years. I have a lot more focus now than before which really helped me today. I am just so happy.”

Shoestrings: Canada’s Andre de Grasse earned a bronze medal in the 100m event, losing to 37-year-old two-time drug cheat Justin Gatlin in a new personal best of 9.90. American Christian Coleman won the race. He entered the meet after being reinstated after having to prove that his three missed drug tests where not all within a 12-month period.
The three went 9.76 – the now world-leading time, 9.89 and 9.90.

Vancouver’s Evan Dunfee earned some retribution, proving that nice guys don’t finish last. The Rio Olympian finished fourth in 2016, when he was in course to earn the bronze medal, he was bumped by a competitor and thrown off of his rhythm. He could have protested and likely won, but decided to do the upstanding thing and leave it be. In Doha, he earned bronze in the time of 4:05:02, in a scorcher, with temperatures nearing 40 degrees. Japanese walker Yukuke Susuki won in in the time of 4:04:20, he owns a best of 3:39:07. João Vieira of Portugal finished second in 4:04:59, just three seconds in front of Dunfee.