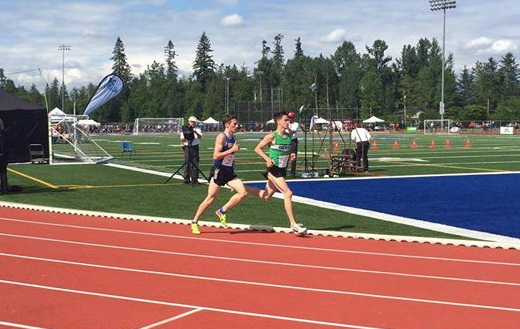 The University of British Columbia Thunderbirds men’s squad has a bright future if the BC High School Track and Field Championships are any indication.

Canadian junior cross-country champion, Tyler Dozzi, finished second at this weekend’s meet in both the 1500m and 3,000m events.

Both times he was beaten by future UBC Thunderbird teammate Charlie Dannatt, who will be graduating from Handsworth Secondary in Vancouver.

“I’m quite proud of my 3,000m record attempt, having led the entire race,” said the Oak Bay High School grad. “I know I’m capable of running faster given the opportunity in a race with runners leading me, and will put this to the test in a 5,000m next weekend in Portland.”

Considering he led the entire race, Dozzi’s performance suggests that he is capable of running sub-14:10 in the Portland Track Festival. Dozzi will be seeking a Pan Am U20 Championships qualification time of sub-15:00.00.

“It was a fantastic race to watch,” said Bruce Deacon, Dozzi’s coach. “We have been training for him to race with the lead for some time. Today, he just had a bit in his mouth and went for it. He took off through 800 in 2:12 and 1600 in 4:28, he slowed a little after that, but he was just flying.”

Dozzi closed out the final lap of the race in 60 seconds, while Dannatt closed in 59 and that was the difference. “Well Dozzi was closing in on him over the final 80m, he just ran out of space. We both think he could have gone earlier, perhaps with 600m to go, and could have taken the race,” added Deacon.

“He (Dannatt) ran a smart race and did what he had to do. Once Chuck smelled the barn, he was gone,” shared an enthusiastic Deacon. “I mean this was a Schiebleresque performance, referring to former Canadian great Jeff Schiebler. It was fantastic to watch.”

“Unbelievable, to take a record that had lasted 42 years and to not only break it but better it by six seconds along with a guy like Tyler was what made it truly an experience I’ll never forget,” shared Dannatt.

“The 3k was an excellent indication of where my fitness and mental strength is, and although it’s a bit disappointing to not own the record, I’m glad it was Charlie that I raced against rather than anyone else,” shared Dozzi.

The two will be roommates at UBC.

Asked about his preparation, Dannatt said, “My coaches (Cindy O’Krane and Darcie Montgomery) have done a fantastic job preparing me for the season. I was confident in my fitness and felt prepared for the race and the result was even better than I expected.”

Shoestrings: The 1500m event had two qualifying sections and a final, Dannatt won his heat handily with a 4:07.08 performance, while Dozzi cruised to a 4:12.69 second-place finish. Dannatt won the 1500m final in the time of 3:57.52, while Dozzi finished the tactical race in 3:59.02, not wanting to put out too much effort; to save himself for the big front-running effort in the 3,000m.

Dannatt earned Athlete of the Meet honours for his efforts.

Dannatt will also be competing in the same Portland Track Festival but seeking a 1500m Pan Am U20 qualification time, which is sub-3:58.00.