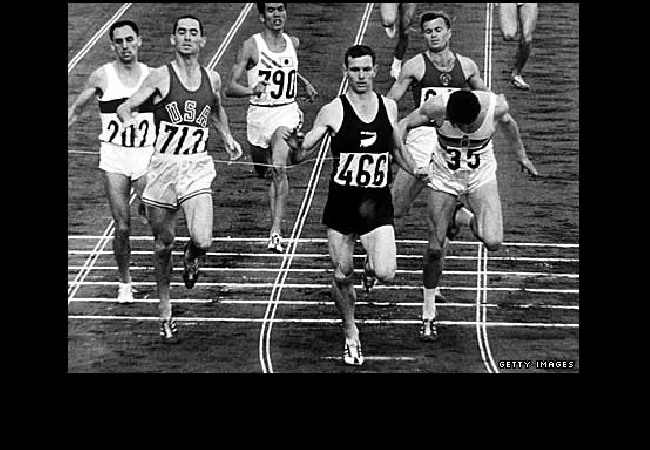 Running Times Magazine wrote a great article on Sir Peter Snell. Track fans probably know well that he broke several world records in middle distance track. His best event was the 800m. He took the world 800m and 880yard world records on a grass track in his home country of New Zealand. His 800m World Record was 1:44.3 which to this day continues to be the Oceanic Record. His 880yard time was 1:45.1.

Considering that the new rubber tracks give at least one second per lap to the runner contesting the 800m, his time might be worth 1:41, which isn’t far off the current world record, fifty years later. His 1:44.3 would have won him medals in all Olympic Games since. Fifty years later at the age of 73, Peter Snell believes that the Arthur Lydiard method of training was right then and continues to be the correct way. Including (as a middle-distance athlete) running over 100 miles-per-week and having long runs of 22 hilly miles.

To track fans, Peter Snell is a triple Olympic gold medalist. To his native New Zealanders, he’s Sir Peter Snell, OBE. In the academic community he’s Dr. Snell, Ph.D., director of the Human Performance Laboratory at UT Southwestern Medical Center in his hometown of Dallas, Texas. He’s co-written three books–one on his running career, another on the mix of science and sport, and the third, titled Use It or Lose It, on adult fitness. At 73 years old, he’s put on a few pounds, takes a few more naps, but shows few signs of any desire to rest on his laurels.

Why should a middle-distance runner be doing 22-mile runs? Why is rest and recuperation important? What role does a coach play in a runner’s development? What’s more important to an athlete, psychology or physiology? Snell’s search for answers to these questions has taken much longer than his rather brief athletic career, but the trip has been equally, if not more satisfying for the boy from Opunake, New Zealand, who burst onto the Olympic stage with a surprise gold medal in the 800m in the 1960 Rome Olympics.

“I grew up in a sporting family,” says Snell of his athletic roots. His mother played tennis, his father golf. Solidly built and muscular, Snell began his athletic career in “ball games”–rugby, cricket, golf and tennis. He was most successful at tennis, where he won school championships, but also had early indications that he had talent in running. Despite doing only occasional runs and some cycling, he was able to win or place in school competitions. Read more.