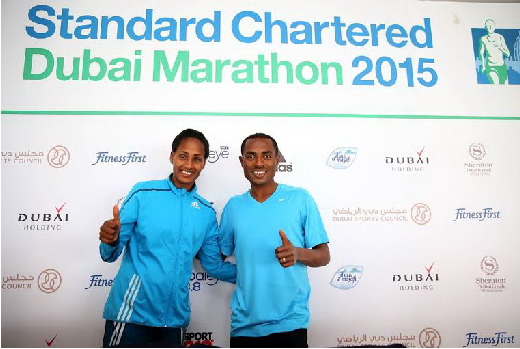 Dubai is boasting the strongest marathon field to date, with both the men’s and women’s course records in jeopardy of falling, as the quality of the fields are very deep. Also, according to the organisers of the Standard Dubai Marathon, the weather forecast for race day, Friday January 23rd suggests generally good, but slightly warmer than ideal weather conditions.

Ethiopia’s Kenenisa Bekele headlines the men’s list which features 20 athletes with personal bests better than 2:10. Half a dozen of them have run faster than 2:06. The women’s field shows great depth as well as 23 that have entered the race have bettered the 2:28 time benchmark.

Aselefech Mergia of Ethiopia is the fastest on the start list with a personal best and course record time of 2:19:31 from her win at the 2012 edition of this race. Mergia is the world’s seventh fastest women all-time with the 13th fastest time.

The field is stacked with an abundance of Ethiopian talent. Current world record holder in the 5,000m and 10,000m distances Bekele said, “I feel confident, I am happy and I know that I am better prepared than before,”

Bekele won his marathon debut in Paris last April in 2:05:04 and then took fourth in Chicago in 2:05:51. It is more standard practice today for younger runners to compete at a world class level in the marathon while still in their early 20s. In the past athletes competed over shorter distances and moved up to the marathon once they felt that they have lost speed. Haile Gebrselassie and Paul Tergat for example are two former marathon world record holders who needed to run in at least two marathons to run at or near world record time, Tergat’s debut was 2:08:15, Gebrselassie needed three and perhaps five to really make his mark. Bekele appears to be the last athlete to graduate to the marathon this way. As his first two marathons were truly world class performances anticipation is high that he will challenge Dennis Kimetto’s world record of 2:02:57.

On three consecutive occasions in the men’s race the winners clocked world-class times of sub-2:05, each time. However, given the depth of the field, it would be more difficult for Dubai’s rookies this year to keep that winning streak alive on Friday.

“This is a very important race for me. I want to improve my time. I am confident to make history here, but you can never say you will win – you can’t be sure, because otherwise it would not be a race,” said Bekele, whose rivals include fellow countryman Lelisa Desisa who was one of those winning debutants here, running 2:04:45 two years ago.

“My training has gone well,” said Bekele and his manager Jos Hermens confirmed it “He is better prepared than before for his third marathon”. Bekele had trained just seven weeks before he competed in Chicago and missed his goal of improving his PB. “When he was running on the track he could train for two months and then break a world record. But this approach does not work in the marathon. After Chicago Kenenisa knew that he had to change something. For ten years he had the same training rhythm. He needed something new and different impulses. This is why I brought him together with Renato Canova. And it is going well,” said Hermens, explaining the switch to the Italian coach. The manager hopes for a better performance from Bekele than in Chicago. “If he runs a low-2:04, improving by around one minute that would be fine.”

The course record by Ethiopia’s Ayele Abshero, who finished in the time of 2:04:23 in 2012, is the main goal. But Haile Gebrselassie’s national record of 2:03:59 could also become an objective on Friday. The great Ethiopian will be in Dubai to watch the race he has won three times in a row from 2008. “I have not spoken to Haile about Dubai, but I saw his races when he was competing here. Every race is different,” said Bekele.

This race may be Bekele’s first opportunity to race other athletes straight on, as with his previous marathons, he was the favourite and didn’t have nearly the competitive field to compete with. Apparently he is ready to go at any pace on Friday.

The race could become even faster than expected. “We don’t want to talk too much about the world record, but it is always a possibility. The half marathon split time we will target will be in that region,” said Peter Connerton, the Event Director of the Standard Chartered Dubai Marathon. “I believe that one day we will break the world record here, but I don’t know when it will happen. We have the fastest and flattest course in the world – and we get the best runners. This time we have Kenenisa.” On Dubai’s super-flat course there is just one corner, two turns and four bends to navigate for the runners.

The course record is also the goal for the women’s race and the current record holder looks ready to attack it. “If all goes well I can run under 2:20 and break the course record. I am as strong as before I was off on maternity leave,” said Mergia, who gave birth to her daughter Sena in July 2013. It took the 30-year-old sometime to regain her form after giving birth. “It was difficult to get back in shape,” explained Mergia. “It was tough to get rid of the kilos, but now I am back at 51,” she said.

“To run the Frankfurt Marathon in October was an option, but my shape was not good enough. I really only wanted to come back once I was fully fit again. Now I’ve been able to train well for four months, so I am ready. My goal is to win the race,” said Mergia, who would earn prize money of $200,000 if she succeeds, the biggest payday in marathon running.

“I am confident, but of course I know that it will be tough. Everyone who is coming to Dubai is competitive,” said Mergia, who will face the defending champion, fellow-Ethiopian Mulu Seboka, and Lucy Kabuu. The Kenyan was second in 2012, crossing the line just three seconds behind Mergia in 2:19:34. Four more runners have personal bests of sub 2:22.