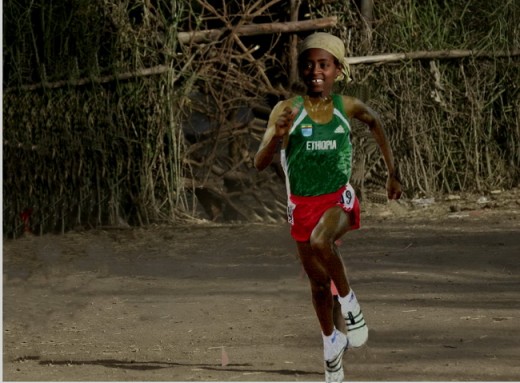 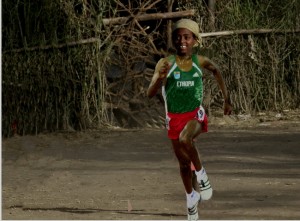 Just as the worldwide running community suspected, it turns out that the supposed “18-year-old” Ethiopian, Tsegaye Mekonnen Asefa, who won the Standard Dubai Marathon Sunday, January 20th, in a near world-record time of 2:04:32 is not 18 years of age. It turns out that the brand new “world junior” record holder is actually just 12. When interviewed shortly after his race he said, “When I grow up I want to be an Injera and Wat Chef.”

The child entered the Dubai event with a half-marathon best of 62:53. During the first half of his debut marathon he split 61:39, nearly one-and-a-half minutes faster than his personal best time that he set at the age of five.

His one-time school coach Gebremariam Mengistu Haile Haile Mariam, said, “We recognised that we had a good talent among us, when at the age of two he would join Haile Gebrselassie for interval sessions in the mountains. Little Mekonnen couldn’t keep up of course, so he would roll off the kilometre repeats at 900 metres or at the 2:50 mark, whichever came first. He would then cut across to the start and re-join the Emperor.” Mekonnen stood out during Physical Education class, which is comprised of running 10 kilometres in 30 minutes. If a child is not able to finish in the required 30 minutes they are paddled with the Ethiopian Shaman Stick, wielded by Mariam, “I never had the pleasure of spanking Mekonnen,” said the coach.

Mekonnen currently trains between 175 and 190 kilometres per week. His training week includes a three hour long run, done without a watch, as well as a two interval sessions. One is a fartlek session, the other is made up of long intervals, “I run two kilometre repeats at 9000 metres elevation in 6:20 with a one minute jog recovery 10 times,” said the shy athlete as he played on the village swing set. Mekonnen’s next goal is a sub-27 minute 10,000 metres during the IAAF Diamond League, this spring.