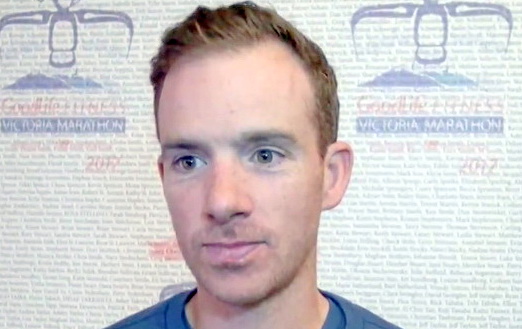 The event is run virtually in place of this year’s Scotiabank Toronto Waterfront Marathon which, prior to the global pandemic, would have been run on Sunday October 18th.

Both Olympians have fond memories of the numerous times they have raced ‘STWM’ as it is known colloquially. An IAAF Gold Label race since 2015, the event has attracted top-class athletes from around the world for more than two decades and provides a setting for Canadians to compete without having to go abroad.

DuChene followed Lanni Marchant home in the 2013 edition of STWM as both beat the existing Canadian record, Marchant running 2:28:00 and DuChene finishing in 2:28:32. For his part, Coolsaet raced to an astonishing third place result in the 2011 race and his 2:10:55 was a personal best at the time and earned him a spot on the 2012 Olympic team. He improved his PB with 2:10:28 at the 2015 Berlin Marathon.

Despite a recent back injury, he has hopes of making a third Olympic squad. It’s a tall order. The 2019 Canadian champion Trevor Hofbauer (2:09:51) earned an automatic place. Last week Tristan Woodfine ran 2:10:51 in London to beat the standard (2:11:30) while Canadian record holder (2:09:25) Cam Levins didn’t finish despite his best ever marathon training block.

“The way I see it if you are going to make the 2021 Olympic team you are going to have to beat  2:10:51,” Coolsaet, who celebrated his 41st birthday in July, declares. “if Cam gets into a race where he can show his true fitness, then he is going to run well. I think he will break his own Canadian record which will mean Tristan will then have the third time at 2:10:51. So if you are serious about making the team you have to aim for 2:10:51.

I’d like to focus on a spring marathon. I wanted to do one this fall and then my back has been sore so I took a little bit of time off. With the uncertainty of races, I didn’t want to rush back and maybe jeopardize a full recovery to get ready for a race that might get cancelled.”

Coolsaet is not alone in thinking today’s shoe technology is superior to when he was running at his peak.  He has recently switched shoes in hopes of cashing in on those benefits. Besides that goal of a third Olympic team, he has been slowly making the transition to coaching.

“I have been coaching kind of low key for over five years, mainly people I know or people with one degree of separation,” he reveals. “Just the past two months I started to promote my coaching a little bit. I made an Instagram page, that’s about it. The guys on the relay I have been coaching anywhere from starting this year to the last few years.”

The trio who will join him on the ‘Coolsaet Go’ team are Nick Rupert, Nick Kayler and Brent Poulsen, all Toronto residents.  Each will run a 10K distance during a planned time trial on Saturday while he plans to run 12.2km to make the full distance.

“For the guys it’s good to have just a little more riding on it. I don’t even know if I will be able to run it at the same time,” he offers. “I am organizing the time trial. If I have everything in place I would like to run it with them. If not I might have to come back the next day and run it.”

Among those he has been coaching is DuChene. The 43 year old turned to him when the Speed River Track Club ceased operations in January and though she might not have another Olympics in her goals she still intends to compete at a high level.

“I think, realistically, when you look at the women’s field it’s very deep and we already have four women who have made the [Olympic] standard,” she says. “In order for me to get one of those spots I would have to run 2:26 or faster. There will be other, faster women who will make the team, and that’s what I am thinking now.”

“I am very pleased with where my career has gone. I have been to the Olympics and I am happy to still run competitively and hopefully a couple more international marathons if we get them and I will be content to be on the other side watching and cheering for them.”

While the Athletics Canada Relay Challenge will attract some of Canada’s very best distance runners, the event is by no means restricted to elites. Anyone may assemble a team and join the Open four-person marathon relay by registering on the STWM.ca website.

The cost is CA$135 per team of four, and team members can run their legs anywhere and at any time between October 1st and 31st.

Each of the Open relay participants will receive a reward package that contains a New Balance souvenir T-shirt, a unique medal featuring an engraving of Toronto’s Old City Hall clock tower, discounts from the Running Room, and a personal hand-written “Thank You” note from a Canada Running Series staff member.