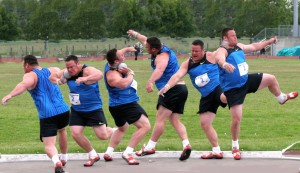 Dylan Armstrong came so close to the gold in Shanghai May 19th, in the second stop in the Samsung Diamond League series. He threw the shot put 20.93m just .05m behind Reese Hoffa’s winning toss.  This is a stark reminder of how difficult it will be to get on the podium in London. There are eight or more shot putters who on any given day can throw 21m or more.  It is going to be an outstanding battle not only in the seven series shot put competition that make up the Samsung Diamond League series, but at the sudden death, one shot Olympic final on August 3rd. Armstrong’s remaining SDL meets are in Eugene, Oslo, Paris, London, Stockholm and Zurich. Armstrong is the defending overall champion in the 2011 SDL and the number one ranked shot putter in the world.

He will throw at the Vancouver Big Shot, the feature event of the Harry Jerome Track Classic on June 10th at Swangard Stadium.  This will be the first 2012 appearance in Canada for the 31-year-old athlete from Kamloops.  The Jerome Classic will be the kickoff for the six event National Track League with stops in Victoria, Edmonton, Moncton, Halifax and Toronto.