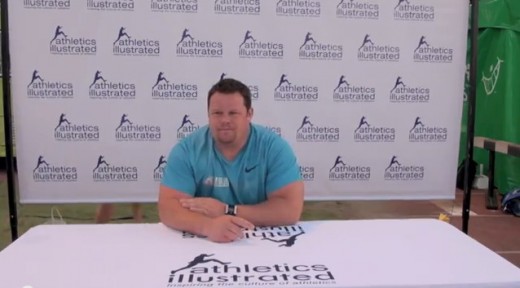 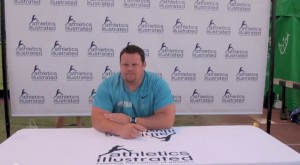 Canadian Olympian Dylan Armstrong of Kamloops, BC will finally receive the medal he earned from the 2008 Beijing Olympic Games on Sunday, February 15th in a hometown ceremony. Asked what winning this medal means to him, Armstrong said, “It means a great deal to me in many ways, particularly when you know that you worked so hard training to get on the podium and you made it!”

Armstrong earned bronze, having placed within one centimetre of third-place finisher Andrei Mikhnevich of Belarus in the Beijing Olympic Games in the shot put competition. Mikhnevich tested positive for performance enhancing drugs, therefore Armstrong moves up from fourth to third.

Armstrong is the Canadian record holder in the shot put having a personal best distance of 22.21m, which he achieved in Calgary in 2011. He has also achieved the silver and bronze medals at the 2011 Daegu and 2013 Moscow world championships, as well as gold in the 2010 Delhi Commonwealth Games and two golds, once each in the 2007 and 2011 Pan American Games. He also owns a world’s indoor bronze medal from the 2010 Doha, Qatar competition.

Armstrong added, “The feeling will be amazing. It was a childhood dream of mine to go to the Olympic Games and to now be able to be an Olympic medallist is the most fantastic feeling!!”

Mikhnevich has been suspended twice and is now sanctioned by the IAAF for life, with all records dating back to the 2005 Helsinki IAAF World Track and Field Championships annulled.

Asked if he feels if the World Anti-Doping Agency (WADA) and the International Association of Athletics Federations (IAAF) are making headway in catching cheaters, Armstrong said, “Yes in some ways they are making a difference. But like I have said before, the real problem lies within governments and federations. This needs to be dealt with.”

Regardless, Armstrong will compete in the 2015 IAAF World Track and Field Championships that will take place in Beijing, China. He also looks forward to competing in the 2016 Rio Olympic Games. He finished fifth during the 2012 London Olympic Games.

Beginning in the early 2000s, WADA began to develop what is known today as the Athlete Biological Passport (ABP), which is an electronic record, where biological markers of doping and doping tests are kept over the athlete’s career. Instead of testing specifically and exclusively for an illegal quantity of a banned substance, WADA is also looking for variances of an athlete’s established results.

Because of the creation and development of the ABP that every athlete must report to, over time, athlete’s behaviors begin to tell a story. From the WADA website:

The fundamental principle of the Athlete Biological Passport (ABP) is to monitor selected variables (`biomarkers of doping´) over time that indirectly reveal the effect of doping, as opposed to the traditional direct detection of doping by analytical doping controls.

WADA didn’t even need the passports for the Belarusian couple, (his wife was busted too) the two straight-up tested positive…