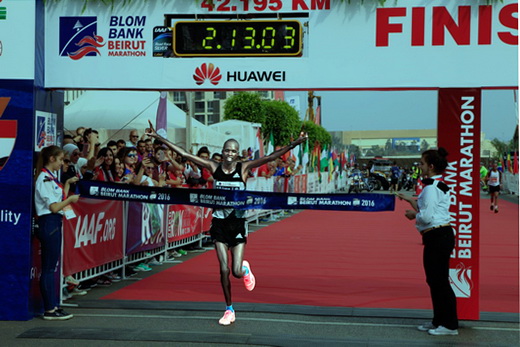 It was an enormous surprise when Kenya’s Edwin Kibet Kiptoo won the Blom Bank Beirut Marathon a year ago but his victory in this IAAF Silver Label race blew his anonymity completely out of the water.

The 29-year-old will now bear the pressure of being the defending champion when he returns to the Lebanese capital on November 12th for the 15th edition of this race.

“I remember something big,” he says of his initial trip to Beirut. “I didn’t expect to win the race, so, when I think back to Beirut, I just remember a big victory in my running career.

“It was a highlight in my running career, a day that I won’t forget in my life. I believe that when you train hard and are disciplined in all that you are doing in your daily life, you will get victories. I believe that being the boss over your own life will make you reach far.”

After a third-place finish at the 2016 Brighton Marathon, a race in which he set his personal best time of 2:11:29, he turned his attention to an autumn marathon accepting an invitation to race Beirut. But the unseasonably warm day, 25 Celsius with no cloud cover, coupled with a difficult course meant his winning time was ‘only’ 2:13:19.

Recent changes to the course, including the removal of a lengthy and stamina-testing 14% climb along the Mediterranean coast, will certainly help this year’s field challenge the event record of 2:11:04 set by Jackson Limo in 2015. Certainly, Kiptoo believes he is up to the task.

He reveals his training has been going extremely well and he can certainly point to some fine results which have boosted his confidence. He won the Luxembourg Night Marathon on May 27th and then finished second in the Hamburg Half Marathon. More recently he came close to beating his personal best half marathon time of 60:11.

“My training this year had been going very well. On October 1st I won the Breda half marathon in 60:42,” he declares. “I feel the body is still strong and I was fresh when I finished the race. I am now counting down the weeks and doing my last part of the training towards Beirut. I am happy to defend my title.

“My goal is to improve my time and also to retain my position of last year. Though I have pressure as defending champion, I know I can make it.”

Represented by the Dutch agency, Volare Sports, he trains in Iten, Kenya with a talented group of marathoners known as Mwisho wa Lami. The group includes Wilson Kipsang the former world record holder (2:02:23 best) and John Komen. The latter has a personal best of 2:07:13 a time that Kiptoo would certainly like to beat one day.+

The Beirut Marathon now in its 15th year was founded by May El Khalil who remains Chairperson of the organisation.

Ms. El Khalil was hit by a truck while out running 20 years ago and while enduring a lengthy hospital stay she conceived the idea of having an elite world class marathon in the Lebanese capital. World marathon record holders Haile Gebrselassie (Ethiopia), Paula Radcliffe (Great Britain) as well as Lord Sebastian Coe, President of the IAAF have attended the marathon over the past three years an indication that interest in the event is growing at a phenomenal rate.

If Kiptoo were to win this year he would be the first man to repeat as Beirut Marathon champion since Ethiopia’s Mohammed Temam in 2010. Clearly, the $15,000 USD first place prize money would come in handy to a man nearing the end of his career. He has reasons to invest money earned through his racing.

“I am married and blessed with one son. His name is Kiplimo,” Kiptoo explains. “We live in Iten. I like staying with my family and spend time with them. I don’t travel mostly, unless I have a mission, like going to races.”

As the Blom Bank Beirut Marathon fast approaches the excitement builds. There is a new and faster course for the athletes to tackle but will there be a new men’s champion or can Edwin Kiptoo repeat? It will surely take an incredible performance to deny him.