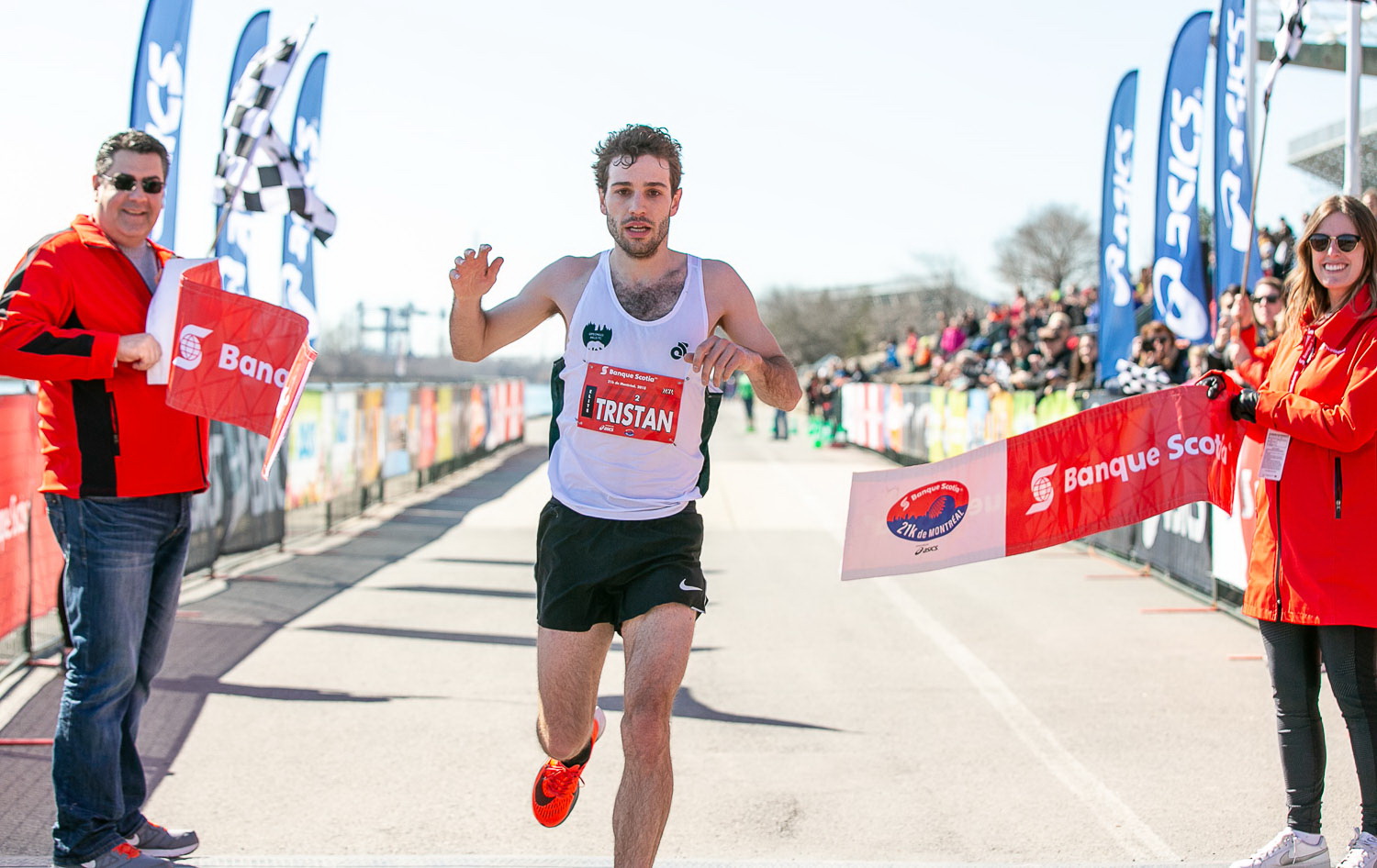 The 25-year-old from Cobden, Ontario won the Race Roster Spring Run Off 8km for the third consecutive time. In January, he shocked many when he knocked three and a half minutes off his marathon personal best in Houston, running it in 2:15:19.

“The 2:15 was a good step from Ottawa taking 3 and a half minutes off, obviously you can’t complain about that” he says. “After that race, I definitely have more confidence going into this year. This year is going to be all about trying to make the Olympic standard in the fall.”

Though he isn’t meticulous when it comes to tabulating his mileage, he reckons he is up to around 180km a week at present. After graduating from the Ontario College of Health and Technology, he decided to focus completely on running for the time being.

“I decided to put off applying for a paramedic job” he reveals, acknowledging the 12 hour shifts would be difficult to combine with training. “I am doing some work. My dad has a wood shop doing some woodworking and I have picked it up. I am doing a little to make some money because running at this level doesn’t pay a lot.”

If he were to successfully defend his Montreal title he would earn $1,500, the same as he received at Race Roster Spring Run Off.  A year ago he won the race in 1:05:43.

“It’s a good course, it’s a fun race” he explains. “It’s good timing in the sense that it’s far enough out from the main races it’s a strength builder for the summer. Last year, it was more of a tuneup for the marathon but this year, with the 10 km being more the focus, it’s more strength focus and trying to get a big chunk of work done. Montreal is great timing, a great course and Canada Running Series always has great races. It’s a no brainer.”

Injuries over the past year have inhibited the 32-year-old Hannah’s progress but at last she feeling like her old self, which her 4th place finish at the Around the Bay 30km (ATB)- on March 31st – demonstrated.

“It’s been going well despite the winter conditions” says the 2015 Pan Am Games marathon bronze medalist. “I have been trying to tough it out. I probably got to my highest mileage in the two weeks leading up to the ATB. The week before ATB, I got up to 174 km which is the highest I have ever done. We have introduced some double days so I am doing two runs on Tuesdays. That has bumped up my mileage. And, my long runs have gotten fairly long.”

Hannah recently changed jobs and now works as a registered dietician at the University of Guelph’s Health and Performance Centre. Varsity athletes are amongst her clients and the workload is more manageable than in her previous position. That is a good sign as she prepares for her primary competition, the Ottawa Marathon.

“I am looking forward to going back there (Montreal). I haven’t been there since probably four years ago, when they had the Canadian championships,” she recalls. “It just hasn’t fit into my season plans since then.”

“I am hoping to have a strong race and it’s really good timing because my goal race this season will be the Ottawa Marathon. It’s really good, timing-wise, to get in a hard effort in the half marathon.  I ran 1:16 mid at the Chilly Half Marathon on March 3rd, so it would be nice to be under that time.”

Hannah has a marathon personal best of 2:32:09 recorded at the 2017 Houston Marathon. Her best half marathon time is 1:12:25, from the 2015 Scotiabank Toronto Waterfront Marathon. She is capable of much more than what her recent results have shown.

“I think I will be in a lot better shape as I will have had a whole month, potentially, running in shorts” she says laughing.  “It will be nice to run under marathon pace in Montreal so that it will seem easier. I want to run the best I can and get a time closer to my personal best.”

Sikubwabo’s story reads like a Hollywood screenplay. He arrived in Canada as the Rwandan 1,500m junior champion, bound on competing at the 2010 IAAF World Junior Championships in Moncton, New Brunswick. He grew up believing the woman raising him was his mother but, just days before he left his homeland, he learned she was actually his aunt. Aunt Floriane revealed his parents had been killed in the 1994 Rwandan genocide. He then remained in Canada.

Today, he is in his final year of Mathematics studies at Laval University and is a two time U Sport national cross country champion. Last month, he proudly represented Canada, for the first time, at the IAAF World Cross Country Championships in Aarhus, Denmark. Road racing, he says, is now in his future.

“My goal is to eventually run the marathon because I enjoy the long distances more than shorter ones” he explains. “I haven’t raced the Banque Scotia 21k de Montreal before. But in 2011 I ran the 5km. I know the park.”

“It’s a fast course and it’s home, it’s Quebec. I really want to be on the podium. If I can run fast that would be great. But I know there are going to be some challenges. Most importantly, I want to have fun.”

Sikubwabo is back in Québec, training, following winter at a camp in Kenya. Ever so grateful for what running has given him three years ago, he founded a charitable organization ‘Running Changed My Life’, which helps kids in Rwanda and Kenya excel in both education and in running.

This 22-year-old athlete surprised many with her second place finish at the 2018 Banque Scotia 21k de Montreal because she was a 2018 winter Olympian for Canada, competing in cross country skiing.

Since she was 14 years old, she has competed in both athletics and cross country skiing. Indeed she won the Quebec Legion Under 16 championships 1200m and 2000m as a teen.

At the moment, she is in her second year at Laval University, studying Business while simultaneously preparing for her marathon debut in Ottawa, on May 26th. According to Laval coach Felix-Antoine Lapointe, she is covering between 110 and 120 kilometres in a week, with some cross-training thrown in – and not cross country skiing but cycling!

Although she is having success on the roads she is still a two-sport athlete, though a shoulder injury prevented her from competing in cross-county skiing this past winter. She had originally been targeting the World Under 23 Cross Country Skiing Championship and had undergone intense training in the months of November and December until the injury flared up. That’s when she abandoned the idea of going to the world championships.

The Montreal 21k will be a test of her marathon preparation. Last September, she ran 1:14:46 for that distance. If the weather is helpful, a personal best might be in the cards.

With his 2:19:03 personal best at the 2018 Chicago Marathon, Eric Bang caught the attention of many in the Canadian running scene. He followed up that performance with another personal best in January, with a clocking of 1:06:59 in the Houston Half Marathon.

“After Chicago, I thought a lot about competitive running,” Bang says of his breakthrough. “What is everyone competing for? To be the best?  To make teams? For sponsorships? For prize money? For podiums? Am I allowed to want these things now? Are these things appropriate goals and aspirations for me? ”

“I thought about the last couple of years and my progression. I’ve gotten to where I am not by looking at what everyone else is doing and what I need to do to be better, but by focusing on myself and striving to reach my potential. My only aspiration is to reach my highest potential as an athlete.”

Bang counts Rachel Hannah as an inspiration – the pair having trained together occasionally in Toronto – but Hannah jokes that he simply got too fast for her to train with. These days, he combines his training with a full-time job at a company called Strategic Coach, which mentors entrepreneurs.

“I am also an assistant Coach for Black Toe Running’s Race Team,” Bang says. “It is very rewarding to work with dedicated, hardworking athletes that share my passion for running. It is also very inspiring. Growth and breakthroughs happen at every level of running and getting to see that is very exciting.”

Looking forward to Montreal as a highly competitive field, he has a specific goal.

“I am hoping to flirt with my personal best,” he reveals. “I took a little down time towards the end of winter and started picking things back up over the last couple of weeks. But I think that, come race weekend, I will be able to get in and around my personal best.”