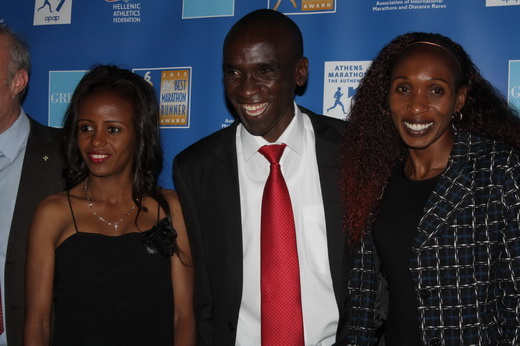 It’s been a highly successful last 12 months or so for Eliud Kipchoge with victory in three marathon classics of Chicago, London and Berlin. And 2015 became even better for the Kenyan without running a single step when he was awarded the men’s prize as Marathon Runner of the Year at the AIMS Gala in Athens on Friday evening. Ethiopia’s Mare Dibaba was awarded the women’s prize after a year in which she won the world title in Beijing among an equally impressive list of accomplishments. This was the third annual edition of the Best Marathon Runner of the Year Awards, organised by The Association of International Marathons and Distance Races (AIMS), held as ever in Athens, which will stage the marathon on Sunday.

The AIMS membership of more than 380 organisers of running events voted Kipchoge and Dibaba the winners. The period under consideration for the voting was from the beginning of October 2014 to the end of September this year.

Since the start of the judging process, Eliud Kipchoge has clearly established himself as the best marathon runner in the world. He turned 31 the day before the AIMS Gala and could look back on a tremendous year, winning such perennially high quality races as Chicago, London and Berlin. In every one he achieved world class times as well, breaking the 2:05 barrier as a matter of course. The summit in terms of time came six weeks ago in Berlin, where he ran his personal best of 2:04:00 which remains the fastest time in the world this year.

“This is a really important day for me which will remain in my mind forever. This is the first time I’ve received such an award in my career,” reflected Eliud Kipchoge and added: “I should like to thank everyone who has helped me in the past 15 years – my coach Patrick Sang but also plenty of others.” He made no secret about his next goal: “Next year I want to win the gold medal in the marathon at the Olympic Games in Rio. Olympic gold is one medal I don’t have.” If he achieves that objective, the one after could well be the marathon world record, currently held by his compatriot Dennis Kimetto, of 2:02:57. “I hope that one day I will also be the world record holder,” said Kipchoge.

Mare Dibaba achieved the greatest moment in her career so far when the 26-year-old won the world title in Beijing in August. She and Kenya’s Helah Kiprop produced one of the most exciting home straight finishes in marathon championship history with the gold going to the Ethiopian by just one second. She also has enjoyed an impressive run of success in the marathon since 2014, becoming the Chicago champion and then ran the world class time of 2:19:52 for victory in Xiamen in China in January, the second fastest women’s time this year. There was more to come as she finished a narrow second in the Boston Marathon in April. “I’m very happy to receive this award, thank you very much,” said Mare Dibaba as she accepted her prize at the Gala, which was broadcast for one and a half hours live on national television and organised jointly by AIMS and the Greek Athletics Federation, SEGAS. “For the past year it has been our goal that the Gala should go ahead, despite the severe economic conditions,” said Kostas Panagopoulos, the SEGAS president.

Three further awards were presented by AIMS. The Green award for an event with the best environmental policy went to the Houston Marathon and the Lala Marathon in Mexico received the award for the best programme of social responsibility. The 1972 Olympic Marathon champion, Frank Shorter, received the lifetime achievement award. The American is recovering from surgery in the USA and his son Alex, also a marathon runner, collected the award on his behalf.

The 33rd edition of the Athens Marathon. The Authentic will be held on Sunday with a record entry on the start line. Around 16,000 runners have entered this historic marathon which follows the route of the first Olympic Marathon in 1896 and finishes in the old Olympic stadium of Athens. Taking into account the shorter events held in conjunction, the organisers confirm that around 43,000 athletes will be in action on Sunday.

Further information is available at: www.athensauthenticmarathon.gr