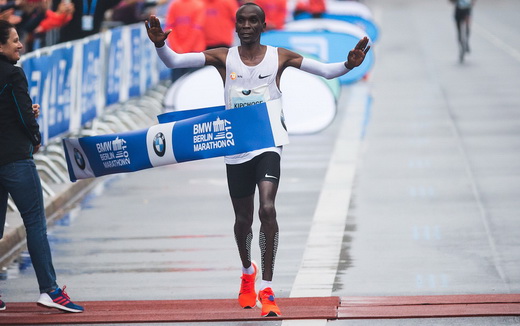 Eliud Kipchoge and Mary Keitany are officially the top marathon runners of 2017. The Kenyans were announced as the winners of the AIMS Best Marathon Runner (BMR) Awards at the Gala in Athens on Friday. The event was organised by the Association of International Marathons and Distance Races (AIMS) and the Hellenic Athletics Federation, SEGAS. “The Athens Marathon. The Authentic” will be staged by SEGAS on the original course on Sunday with a record field of 18,500 runners.

Kipchoge completed a hat-trick of AIMS awards after being voted top male marathon runner in each of the past two years and ran the world’s fastest time of 2017 so far to win the Berlin Marathon in 2:03:32 at the end of September. Mary Keitany also produced another year of impressive performances, breaking the women-only world record with 2:17:01 to win the London Marathon in April. The winners of the BMR awards were decided by the votes of more than 400 members of AIMS.

Over the past 12 months Eliud Kipchoge has once again demonstrated his mastery of the marathon. Not only winning in Berlin but leading the attack on the two-hour barrier in the unorthodox setting of Monza’s Formula One circuit in May. Kipchoge left the Italian racing circuit with 2:00:25 to his credit and his belief in this quest stronger than ever.

Prior commitments prevented Eliud Kipchoge from receiving the award in person but he sent this message to the AIMS organisers: “‘It’s a great honour for me to be chosen for the 3rd time in a row as AIMS best male marathoner of the year. I was in Athens two years ago for the Gala and it was a wonderful experience. Unfortunately, I couldn’t make it to be there in person this year, but I thank AIMS for all the great work and enthusiasm they put into the sport and we look forward towards a great future with all stakeholders in the sport.”

strengthened her resolve to challenge for further honours: “I have been saying for a long time that one of us could break the women-only world record, I said it in 2014, and it has turned out to be me.”

The AIMS Lifetime Achievement Award went to Rosa Mota of Portugal, the women’s World Marathon Champion in 1987 and Olympic Champion the following year. Athens was a fitting venue for Mota’s lifelong involvement in athletics to be recognised, since she won the first of three European Marathon titles here in 1982. She welcomed the transformation in attitudes to women practicing sport in her lifetime: “It was very difficult when I started running in Portugal and now I am so proud because a lot of women run, walk, they are in sport and compete the same as men.”

The AIMS Gala was broadcast live on Greek television and the country’s Deputy Minister of Sports, Giorgos Vassiliadis, described the significance of the classic distance race in his country’s history: “During the past years the marathon has developed into one of the most important sports events in Greece. It stands for the legend as well as the history and today receives worldwide recognition. Athens is the home of the marathon.”